Robotics and artificial intelligence can be used to great effect in Africa – especially if we, as Africans, can control the narrative, said Associate Professor Amir Patel, the director of the African Robotics Unit (ARU) based in the Department of Electrical Engineering at the University of Cape Town (UCT).

Associate Professor, Patel who already holds a prestigious Google Research Scholarship, has just received a US$125 000 (approximately R2.2 million) award from an American company, MathWorks, to further his laboratory’s research into cheetah locomotion.

“I think the award is fantastic because it’s a recognition of us doing interesting multidisciplinary scientific work, enabled by MATLAB, the computer software produced by MathWorks. And what’s also worth mentioning is that we are the first Africans to receive this award,” said Patel.

MathWorks specialises in mathematical computing software which Patel and his colleagues use in their day-to-day research. Patel is energised by the award and he thanked MathWorks for their belief in his ongoing research. “It is very gratifying because it recognises that the African Robotics Unit is a research group that’s pushing the boundaries of how the MathWorks’ tools are being utilised – specifically the innovative use of their software,” he said.

“I think we are punching well above our weight, and I’m glad that MathWorks has recognised that.”

“I’m extremely grateful to them for taking a chance on the ARU because in terms of resources, the amount of funding that we get, and the amount of students we have – our research group is much smaller than our counterparts in the developed countries. I think we are punching well above our weight, and I’m glad that MathWorks has recognised that,” Patel added.

Commenting on the MathWorks award, he said this support was vital in helping him to explore artificial intelligence and robotics in uncharted domains.

“I believe this award will help me further my goal of moving biomechanics beyond the confines of the laboratory,” he said.

Patel explained that traditionally researchers studied animal motion under very controlled environments using either model animals like rats or domestic animals – and sometimes even humans – which are much easier to work with in laboratory settings. “In our research unit, we really leverage our local resources, specifically our wildlife that no one else in the world can access. Consequently, we are doing research normally done in the lab, out in the wild,” he said.

Research critical for the design of future mobile robotic systems

The MathWorks funding will go towards Patel and his research associates’ study, titled “An Inverse Approach to Understanding Cheetah Locomotion”. The study will employ inverse optimal control and inverse reinforcement learning to understand how robots can mimic cheetah movements, Patel explained. These movements include high speed manoeuvres such as rapid acceleration, sharp turns and sudden stops that are the most demanding challenges in legged locomotion.

“Studying the biomechanics of manoeuvrability is critical for the design of future mobile robotic systems which need to react quickly in an unstructured dynamic world,” he said.

Consequently, this research offers interesting case studies on, and enormous insight into, how animals negotiate trade-offs between competing requirements such as safety, economy, stability, robustness and agility.

Knowing the cheetah is the fastest and most agile terrestrial animal, Patel and his fellow researchers can watch and capture its manoeuvrers over a period of time. “We need to understand what it’s trying to achieve when it’s doing those motions. Then we have to boil that down into a mathematical framework so we understand what is important to the cheetah when it is manoeuvring,” he said.

“Optimal control is basically a mathematical method of using optimisation to determine, in our case, the best actions an animal or even a robot should take. For example, whether it is trying to optimise energy, that is, use the least energy, or whether it’s trying to optimise time to get there in the fastest way possible, will each create very different action sequences.”

“So, we model the physics (equations of motion) of the system – which in our case, is an animal – then we can figure out the motion. Very similarly, reinforcement learning also entails a cost function that we are trying to minimise, but instead of using a model, we use a model-free approach to learn the best actions through trial and error,” Patel elaborated.

“Both those methods – optimal control and reinforcement learning – are based on the premise that one understands what the cost function is: what the robot or the animal is trying to achieve. With an inverse approach – and what we want to do in this project – is to figure out the cost function behind its movements. In other words, why the animal does what it does,” he said.

Patel is looking forward to his sabbatical at the University of Oxford in 2023 which will be funded by the Oppenheimer Memorial Trust Fellowship Award which he was awarded earlier this year. This is the second time Patel has been granted this prestigious fellowship.

At Oxford, Patel will be working directly with world-renowned computer scientist and UCT alumnus Professor Andrew Markham. They will conduct research on revolutionary new systems that employ artificial intelligence and robotics to predict the health of wildlife and which, ultimately, will lead to more efficient and effective conservation management.

In this transdisciplinary project, Patel is employing robotic techniques such as computer vision, machine learning, mechanical modelling and sensor fusion to remotely measure the vital signs of wildlife. This project is already under way. Data is being collected and algorithms developed to accurately monitor lions.

Patel has spent roughly a decade developing systems to understand the biomechanics of wildlife – cheetahs most specifically. The combination of all his projects will provide much greater insight into both animal locomotion and wildlife health.

Patel is passionate about how Africa can bring its own strengths to the artificial intelligence and robotics industries. “I don’t see it as us ‘catching up’ to the developed world. I think it’s really important for us to be cognisant of our environment, understand our constraints, and not just apply solutions here that have worked in the developed world. It’s difficult to compete head-to-head with our counterparts in the developed world if we’re going to play the same game, because there’s just so many more people in their labs and there’s way more funding. So, we need to find our own unique angle.”

“I definitely think that using our unique position at the tip of the continent, and our incredible diversity, we can compete and set our own narrative for AI and robotics.”

He continued: “At the ARU, we really strive to leverage our unique position in terms of our environment, access to resources, and have an understanding of our constraints. Our perspective is that we can come up with uniquely African solutions to problems. This often means we have to reimagine ways that things have been done previously. I definitely think that using our unique position at the tip of the continent, and our incredible diversity, we can compete and set our own narrative for AI and robotics.”

ARU as a hub for robotics in Africa

Patel has ambitions of establishing the ARU as a hub for robotics in Africa – conducting world-class research and helping to train the next generation of African scientists.

“I see UCT as being the place where cutting-edge, Africa-focused robotic research happens!” he exclaimed.

“I tell people that studying the cheetahs is similar to the space race, in that it really pushes the boundaries of what we can do and highlights the shortcomings of our current technology. In Africa we have hard, challenging problems, but they force us to innovate and find new solutions.”

A UCT alumnus, Patel completed his undergraduate Mechatronics degree in 2008. He then worked in the aviation industry designing aircraft control systems, before returning to UCT to do his PhD in mechatronics engineering, which he completed in 2015.

Patel is grateful for the many people that have helped him along in his research career. He highlighted the important role former Electrical Engineering department head, Professor Ed Boje, played in influencing his career trajectory. “In the beginning he guided me during my PhD and as a young staff member he served as a great mentor to me,” he said.

“More recently I’ve been really fortunate in that I’ve received great support from the dean of Engineering & the Built Environment, Professor Alison Lewis, and also from the Vice-Chancellor Professor Mamokgethi Phakeng. They’ve both taken a keen interest in my career which has really motivated me further.” 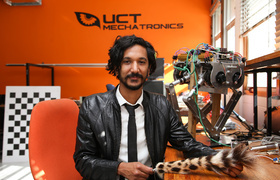 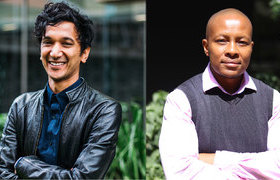