Researchers at the University of Cape Town (UCT) hold 135 positions on the University of Stanford’s Top 2% Scientists in the World. That’s according to the latest version of the list published in September. It features 195 605 researchers who make up the top 2% worldwide based on citations over their full careers.

“Researchers at the University of Cape Town are world leaders,” said Professor Sue Harrison, the UCT deputy vice-chancellor for Research and Internationalisation. “They are doing research that is important, influential and of a high standard, and, as such, are helping to set the research agenda globally.

“I congratulate each and every one of you – regardless of whether you appear on this list – for the work you are doing to further African and global knowledge.”

Citation metrics (how often a researcher’s work is referred to in peer-reviewed publications) do not capture the full merit of a researcher’s work, and a low position on the list (or absence from the list) doesn’t mean they don’t do good work.

This list tends to favour those in the physical and health sciences, and, of course, it does not measure social impact. However, it is one among many important measures of excellence. Here, normalised by field, it provides insight into those whose work is influential in their discipline.

The list, based on bibliometric information (citation metrics) from Scopus and published by Elsevier, is a publicly available database of top-cited scientists. The latest version is based on a 1 September 2022 snapshot from Scopus updated to the end of citation year 2021. It provides standardised information on citations, h-index, co-authorship adjusted hm-index, citations to papers in different authorship positions and a composite indicator (c-score). The list ranks individuals within their own field and relative to the size of field, taking into account individual contribution.

The UCT researchers among the top 100 in their fields are:

View the September 2022 update of the database. 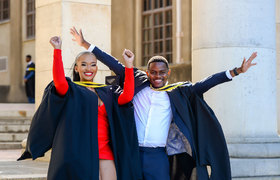