When the University of Cape Town’s (UCT) Dr Shepherd Siangwata arrives at the 71st Lindau Nobel Laureate Meeting in Germany, he’ll be aware of the possibilities for young African researchers like himself – making their mark at this highest international level.

The meeting takes place on the beautiful German island of Lindau from 26 June to 1 July and this year it is dedicated to chemistry. Here, 35 Nobel Prize laureates in the field will present their research, reflect on their careers, and talk with young scientists such as Dr Siangwata.

As a young black researcher currently working in the field of developing novel anti-cancer metallodrugs, Siangwata is hoping to draw from the inspirational lives and work of the Nobel Prize laureates – and their guidance. Also, there is history to be made.

Since its inception, only one black researcher has received the Nobel Prize in a category other than peace or literature. And that went to Sir William Arthur Lewis, a Saint Lucian economist known for his contributions to the field of economic development. In 1979 he won the Nobel Memorial Prize in Economics.

Selection for the Lindau Forum is a highly competitive international process.

“I’m totally elated to be part of the group of young scientists selected to attend this year’s prestigious Lindau meeting,” he said. “It’s such an honour to be afforded the opportunity to interact personally and tap into the vast knowledge of so many Nobel Prize laureates. It is not common to be granted audience with a Nobel Prize-winner; more so, with over 30 of these cutting-edge scientists of our time in the span of one week.”

An early-career researcher within UCT’s Department of Chemistry, the Zimbabwean-born Siangwata joined UCT as an MSc student in Professor Greg Smith’s laboratory. He’d been scrolling through UCT’s Department of Chemistry website for study opportunities, and Professor Smith’s research in catalysis caught his eye. During his master’s studies, a seed was planted. His MSc co-supervisor, Dr Banothile Makhubela, was an alumnus of the Lindau Nobel Laureate Meeting.

Work with a purpose

With the lens on chemistry at Lindau this year (this alternates from meeting to meeting), Siangwata will have a chance to talk about his own work – and its potential for the health sector.

He obtained his PhD in Chemistry from UCT in 2020 for a thesis that focused on adding value to platinum group metals (PGMs) through the preparation and evaluation of recoverable and recyclable catalysts in homogeneous catalysis, in line with the circular economy. In 2021, he registered for postdoctoral studies in bioinorganic chemistry under the tutelage of Dr Siyabonga Ngubane.

It’s a research area that holds great promise as he studies the synthesis of Ruthenium-based bimetallic compounds and evaluates these as potential anti-cancer agents. Siangwata is particularly interested in these as possible metallodrugs against breast and prostate cancer.

“These two types of cancer have collectively claimed over 14% of South Africa’s population,” he said. “The use of PGMs in developing potential metallodrugs provides an avenue of beneficiating or adding value to these expensive, rare and fast-depleting mineral deposits. It’s important because South Africa has the largest reserves of PGMs globally and we must be seen to be at the forefront of adding value to these mineral deposits.”

“I’ve always wanted to be part of something great that has a positive impact on the lives of ordinary people.”

But there is more to the story than chemistry and homogeneous catalysis. The human element is paramount for Siangwata. His background in beneficiation of the PGMs through catalysis overlapped well with his current postdoctoral research on the application of the PGMs in anti-cancer studies.

“Both fields support the United Nations’ Sustainable Development Goals as well as South Africa’s minerals resource value addition for the betterment of society. This is synonymous with the UCT’s Vision 2030,” Siangwata said.

“I’ve always wanted to be part of something great that has a positive impact on the lives of ordinary people.”

Siangwata is looking forward to the Lindau experience, which will also build on his previous opportunities as a postgraduate student when he visited France, China, Italy and Belgium.

Is there any one laureate he’s hoping to meet?

“All of them, actually!” he quipped. “This is a difficult one because all of them have given amazing contributions to the scientific field and a minute with any of them will be invaluable. I’m approaching this meeting with an open mind.

“I believe that as young scientists we need to shy away from limiting ourselves to interacting with only those whose research we identify with. We need to embrace every aspect of research to unlock the full potential of endless possibilities of creating a well-consolidated academic career.”

He added, “The importance of collaboration and extending networks with enthusiasts, young like-minded fellow researchers in attendance from all over the world is especially high for a young African researcher.”

He’s hoping the experience will further his academic career and add to capacity building in developing African countries.

As an early career researcher, Siangwata believes that continued and progressive scientific success in research is built on innovation, curiosity, diversity and an appreciation of the past and present contributions to key sectors of our societies and the world at large.

Before his return to South Africa after the Lindau Forum, Siangwata will join 49 other young scientists who will participate in the Zukunftskolleg Symposium at the University of Konstanz on 2 July. Here, the young researchers will get to know the Department of Chemistry of the University of Konstanz, and the Zukunftskolleg, an institute for advanced studies that supports postdoctoral fellows and research fellows.

Siangwata also participated in the Academy of Science of South Africa and Department of Science and Innovation’s pre-travel meeting. There he met the 10 other young South African scientists who will attend the Lindau Forum. 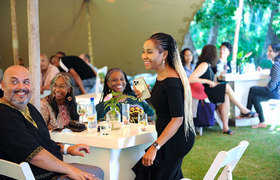 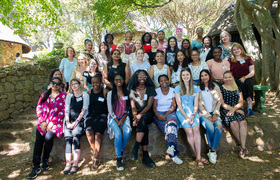