Professor Van Zyl-Smit inaugural lecture: ‘Where there is smoke there is fire’

Professor Richard van Zyl-Smit was appointed full professor in the middle of the COVID-19 pandemic. On 9 March 2022, he delivered his inaugural lecture on the topic, “Where there is smoke there is fire: Facing the giants of tobacco, industry and academia without getting burnt”.

This was the first inaugural lecture of 2022. The Vice-Chancellor’s Inaugural Lectures are held to commemorate the inaugural lecturer’s appointment to full professorship and to provide a platform for the academic to present the body of research they have been focusing on during their career.

It also gives the university the opportunity to showcase its academics and share its research with members of the wider university community and the general public in an accessible way.

Professor van Zyl-Smit took his audience along on his journey of becoming a leading pulmonologist and researcher based at the University of Cape Town (UCT) and Groote Schuur Hospital. For the past 15 years, he has been actively involved in poverty-related respiratory health issues. His lecture was an attempt to weave those 15 years of threads into a coherent story.

He enrolled for his MBChB at UCT in 1991, and completed his internship at Groote Schuur Hospital in 1997. He then went to London in 1998 and worked at University College London and Queen Mary’s Hospital where he obtained his Membership of the Royal College of Physicians. In 2001, he returned to South Africa and commenced his medical registrar training at Groote Schuur Hospital, completing his fellowship exam in 2003.

After completing two years in the Division of Pulmonology, in 2007 Van Zyl-Smit was awarded one of the first Discovery Foundation academic fellowships. He was subsequently awarded an NIH Fogarty Fellowship to complete his PhD full time.

His PhD was lab-based and investigated the effects of tobacco smoke on the pulmonary host defence mechanism against mycobacterial infection. He was awarded his PhD in 2011. In 2013, he took over the Lung Clinical Research Unit from Professor Eric Bateman, leading the unit until 2021. In 2018, he took up a full-time post at Groote Schuur Hospital and was appointed as an associate professor.

He currently is the deputy head of the Division of Pulmonology. His career has led to him becoming an advocate for clean air.

“This was the start of my campaign to tackle poverty-related lung disease.”

In addition to his more than 90 academic publications, he has authored two books, has had several of his essays reflecting on life and COVID-19 published online and is a regular contributor on radio and television interviews.

In reflecting on his career, he spoke about the inspiration behind the two books that he has written: They Don’t Award Nobel Prizes to Dead People and Thoughts on a Saturday Morning.

It is known that tobacco smoking and tuberculosis (TB) are risk factors for lung disease. An article which he co-authored, “Global lung health: the colliding epidemics of tuberculosis, tobacco smoking, HIV and COPD”, formed the framework of his PhD thesis and his subsequent research.

“This was the start of my campaign to tackle poverty-related lung disease,” he said.

During the period that he conducted his studies into why and how tobacco smoking impacted immunity to TB, “vaping exploded”, he said. “We then went on and asked the question, ‘What about vaping and tuberculosis?’”

His first PhD student showed that exposure to e-cigarettes (vapour products) or nicotine on its own similarly impaired immunity to TB. This research was extended to look at the effects of cooking fires (biomass fuel exposure), tobacco smoking and vaping on pneumonia and TB. It was found that they had very similar impacts to immune responses to TB.

A lot of work is being done to look at the economics and legal aspects of tobacco. “What we don’t have and haven’t had is someone who really cares about the smoker who wants to quit,” he said. “So that was an area that I became interested in.”

“There is nothing good about smoking, but people smoke for good reasons.”

In expressing his support for smokers who want to quit, he said, “There is nothing good about smoking, but people smoke for good reasons. Our challenge is to equip smokers to cope with their own lives without the ‘help’ of a cigarette.”

He is involved in various initiatives to spread the message about the benefits of quitting smoking. Because of the harm caused by smoking and vaping, he raised the question about whether universities should accept money from the tobacco industry.

With COVID-19 came Level 4 lockdown regulations and a ban on the sale of cigarettes. Van Zyl-Smit was approached by both sides to support their cases for and against the cigarette sale ban. “I was critical of the South African government because banning the sale of cigarettes without offering support to quit was inhumane and a hugely missed opportunity.

“I am not a fan of resilience training,” he said. “But resilience is important. To survive in medicine (and academia), you have to be able to cope. The better you can cope, the longer you can survive.”

He is a strong advocate of creativity as part of resilience. His hobbies became critically important to him when he realised he needed to step away from difficult work situations.

“We need to do a better job of looking after ourselves,” he said. “I am convinced that we are of greater value alive and functional than dead or dysfunctional.”

In concluding, he said, “The story is ongoing. In South Africa and many places in the world, we face this intersection of poverty and respiratory disease. Unless we deal with poverty, we are going to be ineffective in dealing with all the other components that interact with poverty.” 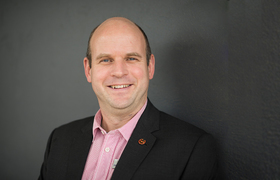 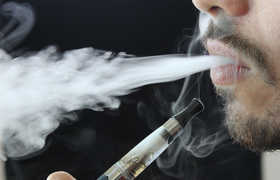 News
The case against e-cigarettes 28 May 2019 Republished 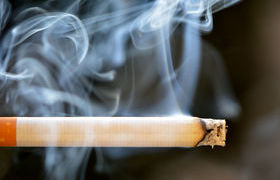