Bernard Cement, a one‑of‑a‑kind, dedicated and passionate mathematics educator with a teaching methodology that’s second to none, is the recipient of the 2021 Stella Clark Teachers’ Award.

Cement, who teaches at EPP Mhinga High School in rural Limpopo, accepted his award from the University of Cape Town’s (UCT) Vice‑Chancellor Professor Mamokgethi Phakeng during a virtual event on Monday 16 August.

The Stella Clark Teachers’ Award is a prestigious UCT accolade and honours the memory of Stella Clark, a language development lecturer in UCT’s Centre for Higher Education Development (CHED). The award pays homage to and recognises teachers’ outstanding contributions to the field and their unwavering commitment to their pupils, despite difficult circumstances in severely under‑resourced settings.

For the 15th consecutive year, the Stella Clark Teachers’ Award committee called on students to nominate excellent teachers who have made a marked difference in their lives. This year, Akani Tshabalala’s nomination made the cut. Tshabalala, a fourth‑year electrical engineering student, submitted a compelling motivation on why Cement should be the deserving recipient of the award.

“Even after four years of being at varsity, when I saw the Stella Clark Award [call for nominations], the only person who came to my mind was you.”

“Mr Cement, you are such a special soul, to Mhinga High School and to me. Even after four years of being at varsity, when I saw the Stella Clark Award [call for nominations], the only person who came to my mind was you,” said Tshabalala.

Tshabalala described Cement as a maths genius, a father figure, and the epitome of excellence and creativity. He said Cement’s pupils have always been his number-one priority, and that he gives selflessly to ensure that they perform well in his subject – regularly sacrificing time after school and on weekends to deepen their understanding and love for mathematics.

As an example of his dedication and commitment to his craft and to his pupils, Tshabalala explained how Cement set up a mock exam and used past mathematics exam question papers (already written by pupils in other provinces) to test pupils’ knowledge and preparedness ahead of their final exam. About 200 pupils sacrificed their Saturday morning to write the exam, and by Monday morning, Cement had marked every paper.

More than that, as a pupil in his class, Tshabalala valued Cement’s one‑of‑a‑kind teaching style and how he treated all pupils fairly and with the same amount of respect, whatever their academic level.

“You showed the same commitment and dedication to every student in your class, whether they [attained] 90% or 9%. Because of your dedication, I achieved 100% in my matric maths trial exam. I did pretty well in the final exam too. That’s why I got in to UCT,” said Tshabalala.

He said Cement has made an immeasurable impact on his life, and his famous saying ‘It won’t be nice on the streets if you don’t study’ continues to motivate him today.

“You have a lasting place in my heart, and not only in my heart, but in the hearts of many other students as well. Continue to do what you’re doing, and know that it has planted a seed in our hearts. You deserve this,” said Tshabalala.

A great deal of gratitude

During her address, Professor Phakeng said the Stella Clark Teacher’s Award serves as a reminder of the value of great teachers who hold the power to change the future of many young South Africans’ lives. Thanks to the award, she said, over the years the university has rubbed shoulders with many extraordinary teachers, who – like Cement – have helped pupils to achieve excellent results, and who enabled them to set a firm foundation for their university education.

“It is on the shoulders of teachers like these that so many of our UCT students stand today. We are indebted to these teachers for refusing to allow poverty and a lack of resources to stand in the way of greatness,” she said.

Phakeng, who started her career as a high school mathematics teacher, said she was delighted to share in Cement’s deep love for mathematics and his desire to instil the same love for the subject in his students. She said that early in her career, she learned that a good teacher is a lot more than someone who instructs pupils at a chalkboard. A good teacher is also a role model who cares deeply for all learners, said Phakeng; and Cement is a “shining example” of what it means to be a good teacher.

“Thank you for not only sharing this passion of mathematics with those lucky enough to have a place in your classroom, but for proving that quality teaching can make a difference.”

“Thank you for not only sharing this passion of mathematics with those lucky enough to have a place in your classroom, but also for proving that quality teaching can make a difference, even in one of South Africa’s poorest provinces,” she said.

“As Akani said, you are exactly where you are meant to be.”

Speaking as a teacher in an overcrowded classroom in Malamulele Township in rural Limpopo, Cement said, teaching comes with many challenges. But knowing that his work has now been recognised is exciting and motivating.

He thanked the Stella Clark Teachers’ Award committee for acknowledging outstanding teachers around the country, in honour of Clark, another dedicated teacher, who passed away in 2005. He commended them for their work behind the scenes – sifting through nominations and eventually selecting only one teacher worthy of the award.

“Thank you for recognising the work of those people deep down in the rubble,” said Cement.

The Zimbabwean-born teacher described teaching as a “mammoth task”, especially in an under‑resourced setting. And when a class is filled with about 60 learners (before the COVID-19 pandemic) who are eager to learn, Cement said, his teaching philosophy is crucial: always be prepared.

“You can’t go to class unprepared, even if you are an experienced educator. Someone will ask you a second or third question, and you need to be prepared to answer it,” he said.

Cement places his learners at the centre of his work and makes a big effort to get to know each learner individually, and to understand their strengths and weaknesses. He also believes in the importance of civic engagement and getting involved in community development activities outside of school. It’s part of what makes a teacher successful, he added.

“I’m happy that Akani nominated me. I will continue to do my duty and to give my best. I am more than motivated to do so,” he said. 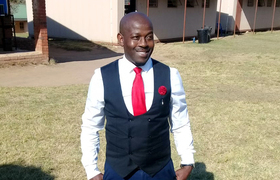 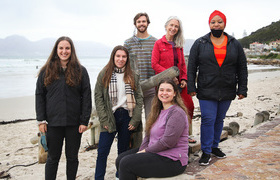 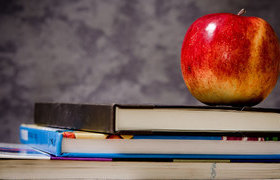 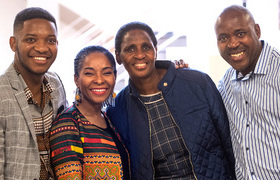