‘UCT was my lucky break’

When Gregory Ford joined the Properties and Services department at the University of Cape Town (UCT) in 1985, he was a young, naive and inexperienced 17-year-old youngster. It’s safe to say his life has come full circle since then, and UCT has been witness to it all.

On 1 November 2020, Ford celebrated his 35th UCT anniversary. The day presented an opportunity for reflection on the three-and-a-half decades that seem to have passed in the blink of an eye. The milestone was marked by a feeling of “joy and disbelief”.

“Thirty-five years have come and gone so quickly.”

Ford is among a number of staff members who will be honoured at the virtual UCT Annual Awards for their service and contribution to the university over the years. This year’s long-service awardees are employees who have notched up 15, 25, 35 and 45 years with UCT – a collective 3 930 years of service to the campus community.

“Thirty-five years have come and gone so quickly. It feels like just the other day when I joined the UCT family. Yet it’s already been so long,” he said.

Ford remembers the day he joined the Properties and Services maintenance unit like it was yesterday. He had left school a few short weeks earlier to find a job and help his single mother pay the bills – he was in Grade 10 at the time. The decision to leave school had been inevitable. Up until that point, Ford’s older brother was the family’s sole breadwinner. But he was about to get married and start a family of his own.

“He was the only one working. With him out of the house, I had to make a plan to find a job,” Ford said.

When a temporary position presented itself in the Properties and Services electrical division – a subdivision of the maintenance department – Ford applied, and he got the job. He had hoped for something more permanent, but with responsibilities more typical of a man a good few years his senior, he grabbed the opportunity. He told himself that his time at UCT would be a good stepping stone as he searched for something long term.

When a permanent job became available in the same unit, he was selected for the role, and he has since matured at the university. The once-shy, introverted teenager with no work experience has become an accomplished, respected member of the residence maintenance team. While so much has changed around campus, in the country and around the world, one thing has remained the same: his love for his job.

Ford spent a few years in the electrical division before moving to residence maintenance where he still finds himself today. His job involves fixing all electrical appliances around the residences’ kitchens to ensure students’ meals are prepared and delivered timeously.

The 52-year-old takes his job seriously. He puts his best foot forward every day and tackles the challenges at work head on – with a positive attitude. Working both “hard and smart” is Ford’s philosophy and has counted in his favour throughout his working life.

“UCT was my lucky break. This job has been a true blessing, and working hard shows appreciation, which is what I strive to do every day,” he said.

Typically, he starts his day at the crack of dawn and makes his way to campus to get on with the business of the day. This routine hasn’t changed much in the past 35 years, he added.

“I like to start early. It gives me an idea of what’s going on and helps me to plan my day.”

“I like to start early. It gives me an idea of what’s going on and helps me to plan my day and where I need to be.”

And there’s no corner on the UCT main campus that Ford is not familiar with. Over the years he’s worked on upper, middle and lower campus.

“I think when you’ve spent this long in the same place, you have a pretty good idea about where to find things and what fits where.”

Change has been under way at the university for many years. Ford said that the student complement has increased dramatically, and this growth has brought with it the need for additional buildings and recreational spaces.

“Things have changed so much. We have more students, and to accommodate them, we have more buildings now too,” he said.

He said that the university also offers more learning opportunities for staff in 2020, when compared with 1985, which has been “beneficial” for staff in order to help them succeed in their roles.

“Staff training is important. It’s one way of moving forward and motivating staff to achieve better.”

UCT is Ford’s home away from home, and his colleagues are his second family. After all, he said, they’ve been witness to many milestones in his life: his marriage, becoming a father for the first time and later welcoming his two grandchildren into the world. And when his mother passed away a few years ago, his colleagues offered unwavering support.

“Colleagues have become dear friends, and that, for me, is wonderful.”

“Through all of it, my UCT family was there, supporting me. Colleagues have become dear friends, and that, for me, is wonderful.”

This, he said, has also made going to work fun and enjoyable, and even though colleagues have come and gone, thanks to their contribution, his long service at UCT has passed in a heartbeat. 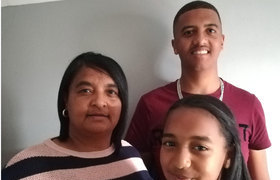 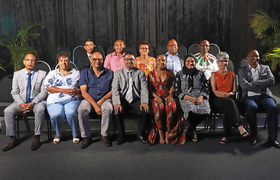