It’s a well-known fact – and avid golfers who enjoy hours on the golf course can attest – that Egyptian geese love the course as much as, if not more than, those with a club in hand. The question, however, is: Are golf course managers doing enough to effectively control the impact of our feathery friends on their lush, irrigated lawns?

A paper titled “Managing nuisance Egyptian geese (Alopochen aegyptiaca) on golf courses in Cape Town, South Africa”, which was recently published in the African Journal of Wildlife Research, demonstrates that golf course managers have not implemented adequate measures to mitigate the impact of geese on their golf courses, despite researchers’ recommendations.

The study, led by Dr Rob Little at the University of Cape Town’s (UCT) FitzPatrick Institute of African Ornithology, reveals that the influx of geese on the courses is “not a failure of science” to control them. Instead, he said, it’s a “failure on the [side of the golf courses] to manage them”.

“This can be regarded as a case where interactions between humans and wildlife lead to conflict between different stakeholders over appropriate management interventions, resulting in the research being ignored,” Dr Little said.

Egyptian geese are indigenous to South Africa and their prevalence has increased dramatically in the Western Cape in the past 40 years. This is largely due to a surge in the number of farm dams, a rise in agricultural crops and large areas of urban green space.

But their faeces seem to be causing havoc on the course.

In the past, golf courses have implemented a range of control measures, which included chasing geese with dogs and remote-controlled vehicles, culling the birds by shooting them, destroying their eggs and nests, and relocating the geese to other parts of the province.

“Passive harassment measures were generally less effective. Culling, relocating and chasing them with dogs were considered the most successful control measures; however, public opposition to culling in urban areas exerted pressure on [golf course] managers to consider non-lethal alternatives,” he said.

According to Little, between 2012 and 2015, a team of staff and students at the FitzPatrick Institute of African Ornithology investigated the perceived problems geese bring to golf courses in the Mother City.

“The geese also seem to harass other bird species on the course and that, along with their excrement, seem to be two of the main perceived problems.”

Research indicated that geese particularly enjoy being close to water bodies (within 100 metres) that they can flee to if danger threatens them or their young, and they like large open patches of lawn (greater than 1.5 hectares) to easily detect danger around them.

“We introduced trained raptors to further test the effects of manipulating the landscape of fear.”

The majority of golfers (87%), as well as non-golfers (86%), felt that the goose population required active management to reduce the numbers. Little said that more than half of respondents consider the geese to be a severe problem and indicated that they’d like for the species to be reduced by at least 50%.

During their study, the team assessed how golf courses are managing the problem. They experimented by altering the landscape using falconry to enforce fear, and they did observe changes in the behaviour of the geese. Little noted that the research aimed to understand the factors that underline the “nuisance phenomenon”.

“We introduced trained raptors to further test the effects of manipulating the landscape of fear using Harris’s hawks and controlled mostly non-lethal flights towards the geese. This process dramatically reduced the number of geese on the course by 73%.”

Little said that golf course managers need to shift their thinking from focusing on the geese to manipulating the habitat features that the birds enjoy. Specifically, ponds need to be reduced in number and in size and should not be placed adjacent to open foraging or loafing lawns.

Other modifications could include planting vegetation or erecting goose-height fences around the ponds and fairways to reduce ease of movement and their ability to detect predators.

Generally, geese find the tranquillity of golf courses very attractive. Therefore, Little advised that golf course managers should act by introducing the team’s recommended changes, as well as the use of falconry.

“There’s been little to no uptake from golf course managers.”

“There’s been little to no uptake from golf course managers.”

“The lack of implementation is surprising since our research findings have been extensively communicated to help manage the goose problem on Cape Town’s golf courses so that everyone can enjoy the space.” 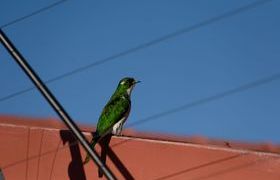 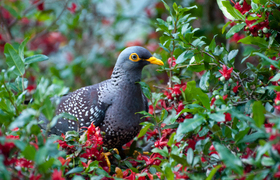