Musa Nxele, from the Nelson Mandela School of Public Governance in the Faculty of Commerce, has just returned from Paris, France, after spending some months studying towards his PhD. He is registered with both the University of Cape Town (UCT) and the University of Paris 1. Nxele was awarded a study grant by Campus France, a French government agency for the promotion of higher education, international student services and international mobility. Here he reflects on his recent visit.

“In October 2019 I left Cape Town for Paris to spend obligatory time at the University of Paris 1 working on my PhD. Did I manage to come back before the coronavirus hit? I will leave readers on the edges of their seats before giving the answer,” he said.

Before Nxele left, there was a lot of uncertainty about whether he’d be able to get to Paris. The day before he was due to leave, his funder informed him that his flights were booked, his visa was to be issued on his way to the airport, and that accommodation would be booked when he arrived.

“Not being one to trust easily, it was a hard decision to step into the plane and potentially risk being temporarily homeless and destitute in Paris.”

“It was a hard decision to step into the plane and potentially risk being temporarily homeless and destitute in Paris.”

Being booked to stay in Paris for a few months, with the ‘agile’ plan as a guide, Nxele decided to pack light – a cabin suitcase and a slim laptop backpack.

“The last thing I wanted was to both be lost (I always get lost!) and drag a big heavy bag in Paris. I call this part of the story Paris.”

Only a few people know why Paris has a special place in his heart, Nxele said.

“While pursuing a master’s degree in Paris six years ago, I met a love of a different type. I fell for a church. (The hippy plan sure sounds better now, huh?) It was not for its architectural physic, being a small Baptist church just outside Paris, in Rueil-Malmaison; I fell for the people, their passion and their food.”

Back then, he said, he would travel an hour to get to this church, which he found via Google.

“The people were so welcoming, so united, so happy [and] authentic. Every Sunday we sat for a meal after church, always cooked with weight and meaning. We met often during the week, for more food in homes, movies and great chats. I felt the ground beneath my feet, for the first time, in a foreign country that sounds like French. I never had this in South Africa.”

This time around, the first time that he walked back in, Parker, the pastor, preached a sermon on a man who found a land with treasure, and in joy went off to sell everything he owned to buy the land.

“He titled his sermon ‘Worth every penny’. It sure was. I call this part of my story Parish.”

“Passion takes me to terrifying places.”

Nxele’s study regime in Paris was demanding. He had a lot of ground to cover on his PhD. Being overly ambitious, he said, he picked a topic that required a lot of data collection, riddled with lots of uncertainty.

“But passion takes me to terrifying places. I mostly get embarrassed because [I had] quite a lot fails, but it makes for a stressful and potentially rewarding life.”

He presented elaborate plans to his supervisors and worked for hours with dead ends.

“I walked a lot too because there was a big labour strike for weeks that brought public transport to a halt. I got lost quite a bit, even on my way to familiar places. I used a GPS to drive home, so you can imagine.”

Nxele said he beat the COVID-19 travel ban and arrived back in Cape Town in February.

“Beyond my safe return I don’t have much to report other than I worked a lot. I don’t have a lot to show for it yet so I am [low-key] freaking out. This part of the story I call, very aptly, the PhD.” 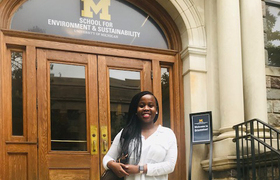 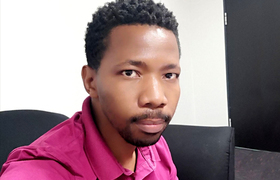