At university, there are lessons to be learnt both inside and outside lecture halls. For Akha Tutu, president of the Students’ Representative Council (SRC) at the University of Cape Town (UCT), these lessons included choosing the right circle, finding a degree he’s passionate about, navigating an institution in transformation and learning how to cope with failure.

Akha was born in Umtata in the Eastern Cape, but at around three years old he and his family moved to Lwandle township in Strand. It was Akha, his grandparents (who he regards as his mother and father and will henceforth be referred to as such), his uncle and his “fave”, Aunt Zoliswa.

Akha began school at Lukhanyo Primary School, which was established after ACJ Phakade Primary School could no longer accommodate the number of learners. The solution? Start a new school, use the same building and start at different times. This meant that Akha and his Lukhanyo classmates started school once the children from ACJ Phakade were done with their school day.

“It was such a struggle at home because … they had to chase me! It didn’t make sense for a child to be going to school when others are [returning].”

“It was such a struggle at home because … they had to chase me!”

He fondly remembers his mother chasing him, trying to get him to school every day. Eventually, she gave up and enrolled him in Umnqophiso Primary School, which he loved and where he remained until grade five.

In 2006 the Tutus moved back to Umtata where Akha matriculated in 2013.

Although his father never obtained a formal education (he learnt how to read and write in isiXhosa while working at the mines), and Akha’s mother had only completed grade six, education was important in the Tutu household. As Jehovah’s Witnesses, an appreciation for reading was instilled in him from a young age.

While they were unable to help with homework, Akha’s parents made sure he completed his schoolwork and always checked on him. Fortunately, there was never any resistance from Akha.

“I didn’t make things difficult for them because I was very responsible ... I really liked going to school. I just wanted to be educated,” he said.

Akha enjoyed being the centre of his family. Every day he would be met by his parents, who would wait outside for him as he returned home from school. When he was 14 years old, he quickly had to learn to share the spotlight – his baby brother was born. It was a responsibility he took on with pride. He named his brother Akho and promptly laid claim to him, treating him like a son.

When Akha matriculated, he knew he wanted to return to Cape Town and study at UCT. When UCT’s confirmation finally arrived, the family was proud, but it took some time for him to explain to his parents that things were about to change. They could no longer wait on the stoep for him and he would only make it home every six months.

Once he arrived in Cape Town, adjusting to the city presented no challenges for the student leader. But getting used to UCT did.

He struggled to find a degree and majors he loved, changing them three times before settling on a BA with majors in isiXhosa language and literature, and linguistics. But there was much more to overcome and many more lessons to learn.

Residence life meant he quickly had to get used to different people and customs. There were “cultural shocks”, UCT was a “very white space” and the class divide became very apparent.

“You actually realise how poor you are when you come here ... I knew we were poor, but I was comfortable,” said Akha. “When I came to UCT, wow, you start looking at your clothes … and an 18-year-old drives an iPolo, let alone that third-year driving a Porsche!”

In addition to that, Akha was struggling to come to terms with his sexuality. In choosing to study at UCT, he thought he would escape the homophobia he had experienced in Umtata, but he soon found that there was no escaping it, even so far from home.

Fortunately, Akha found himself a circle of “quality” friends who supported him on his journey; this is something he wishes everyone will find early on in their university career.

“I am proud of the friends I have ... I actually list that as one of my achievements. Like wow. Like I am so proud,” he said.

One of the friends who played an instrumental part in him accepting and loving himself is Olwethu Deliwe.

As a Jehovah’s Witness, the Bible was central to his upbringing. He was so committed to his faith that he occupied a senior position in the organisation as a ministerial servant. It comes as no surprise then that Akha can recite scripture by heart, including those that refer to homosexuality as a sin and an abomination.

Trying to understand what the Bible said about his sexuality and his love for Jehovah God presented immense internal struggles for Akha, who had grown up being hurt.

“The world knew about me even before I knew me by ostracising me, being called imoffie.”

“The world knew about me even before I knew me by ostracising me, being called imoffie. And for some reason, even though I didn’t understand, that hurt, that stung.”

Finally, at university, Olwethu helped Akha do the “intense work” of finding and loving himself.

“He really supported me ... he really made me realise that I’m struggling with self-hate,” said Akha.

“We are literally marinated in toxic masculinity, especially as Xhosa men.”

Learning to juggle roles and responsibilities was another key lesson for the SRC president. While he had served in student leadership positions before, taking the helm of the SRC – the voice of some 29 000 students – is no small task.

Now in his sixth month as SRC president, Akha said he continues to learn.

“I’m still learning. But for me what helps is that I speak up,” he said.

One of the lessons he had to learn early on is not to overextend himself. Another that he tries to keep top of mind for himself and his SRC colleagues is “books first”. This is particularly important for the president, who knows the SRC is made up of individuals who are dedicated to serving the student body.

Outside of formal student leadership structures, Akha has demonstrated his proclivity for leadership too. Right from the start, he immersed himself in the #MustFall movement. While he doesn’t claim to have taken any leading role, he was committed to the cause and attended meetings and protests diligently.

On a more personal level, Akha showed an ability to self-lead and to take responsibility. UCT provided him with one of the hardest lessons: failure.

His involvement in #MustFall, uncertainty around which degree to follow, adjusting to UCT and sometimes leaving assignments to the last minute meant he had to deal with failure, one of which was falling a year behind.

“I’ve never failed before. Never. For the very first time I failed.”

“I’ve never failed before. Never. For the very first time I failed,” he said.

He quickly took responsibility, owned his part in it and pushed forward.

“It is the responsibility you take that gets you thinking, that reminds you of who you are.”

Now, having taken responsibility and having learnt from his mistakes, Akha has two scholarships: one from Mellon Mays and the other as a National Research Foundation Innovative Scholar.

UCT decided to suspend the March graduation ceremonies as a preventative measure against the spread of COVID-19, so Akha graduated on 26 March in absentia. While he is disappointed that it didn’t go ahead as planned – he had booked flights and accommodation for his mother and Akho – he understands and agrees with university leadership. So too does his mother.

“I support management for having done what they’ve done. This is symbolically very important for me and my mom … she was really looking forward to it, but she was really understanding.”

While he waits for the suspended graduation to take place – something he plans to discuss with the UCT executive leadership as the SRC president – Akha is ploughing ahead with his honours degree. He is excited to begin writing his thesis, which will focus on language as an archive, and which he plans to write in both isiXhosa and English.

“That’s my biggest priority right now and I want to pass it with distinction. I really want to hold myself to that,” he said.

As for the rest of his term as SRC president, Akha is adamant that he will achieve what he had set out to do from the very beginning: to leave sustainable change. 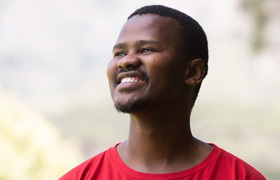