The University of Cape Town’s (UCT) Dr Amir Patel’s fascination to understand movement in animals, particularly the cheetah, has led to many innovations in robotic design. Little did he realise how much these inventions would break barriers in the measurement of human movement and biomechanics.

Dr Yumna Albertus from the Division of Exercise Science and Sports Medicine, met Patel through their joint membership of the Next Generation Professoriate (NGP). Both do research on human movement. Albertus has been interested in promoting movement in patients with serious spinal injuries.

Together with Saberi Marais from UCT Research and Contracts Technology Innovation, Patel explored the commercialisation of his technology. They became quickly aware that this technology would have application for human performance and biomechanics. An initial meeting scheduled for an hour lasted almost three hours, leaving the three in utter amazement with the incredible possibilities of Patel’s technology.

“We’re now able to expand our research questions that were limited purely based on the inability to measure human movement on various terrains.”

A limitation with measuring human movement is that researchers are forced to confine research questions and measurements to a biomechanics laboratory. This limits the freedom of movement and real-world terrains. The new technology dissolves these barriers and will now allow for the freedom of human movement.

“We’re now able to expand our research questions that were limited purely based on the inability to measure human movement on various terrains, with this avenue opening, our research will be more applicable in areas of human performance and disabilities”, explained Albertus.

Within three months of their initial meeting, they started their first collaboration project in validating one of Patel’s innovation technologies, the low-cost 3D force plate, designed and developed by Patel’s team: Callen Fisher, James Teversham and Liam Clark.

Force plates comprise of transducers that measure the change in electrical current through sensors, as the force is applied. Pairing force plates with optical motion capture systems, such as VICON, enables the visualisation of a body in space, and specifically, relative to the force plate. From this combined data, information on the way a person moves, including the forces placed on the body and irregularities in movement, can be identified.

Information is obtained that monitors performance in athletes and injured patients. It can contribute to physical rehabilitation. Patel’s low-cost, novel force plate (NFP) is able to capture 3D ground reaction force data. Its performance matches that of the current gold standard force plated (AMTI), yet it is much cheaper. This cost reduction means that multiple force plates could be afforded and used, increasing the surface area that is able to measure force. This would allow greater freedom of movement, and more natural movement by participants during trials. This would likely produce greater accuracy in the measurement.

Albertus established validity-testing protocols to test the accuracy of the NFP. She enrolled Ariella Barnett, an exercise science honours candidate, to assist in conducting the study. They recruited 21 healthy, uninjured individuals who were required to complete a battery of movement trials, including walking and drop-jumps, on both force plates, in UCT’s biomechanics laboratory based at the Sports Science Institute of South Africa.

Biomechanical engineers in the Central Analytics Facility at Stellenbosch University processed the data. The study showed that Patel’s NFP elicited measurements consistent with the gold standard force plate and measured valid, reliable change in time-force data, with a sensitivity consistent to the AMTI.

As a researcher interested in biomechanics, Albertus is excited with the prospect of now being able to expand her research questions that were limited purely based on the inability to measure human movement on various terrains. With this avenue being opened, research will be more applicable in areas of human performance and disabilities.

Patel has further technologies that will be validated with Albertus’s assistance. This multi-disciplinary collaboration has shown how barriers in research can be broken/shifted. 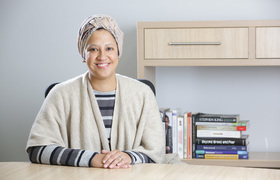 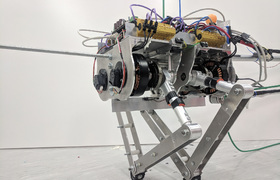 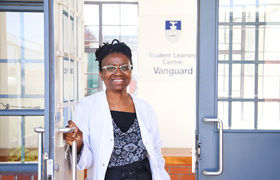