Jabulani Ncayiyana is a senior lecturer in the Division of Epidemiology and Biostatistics, School of Public Health and Family Medicine at the Faculty of Health Sciences at the University of Cape Town (UCT). He was recently selected to be a member of the Future Professors Programme (FPP), an initiative of the Department of Higher Education, Science and Innovation.

“My career path in academia has not been straightforward,” said Ncayiyana. “Growing up in a rural village of Ngunjini, KwaMachi, near the small town of Harding in southern KwaZulu-Natal, my primary and secondary schooling was the stuff of clichés. I walked 3 km to school each day through streams and across farms.”

Ncayiyana enjoyed school and excelled and completed his matric with university exemption in 1996. “I could not go to university because my parents – [my father] a labourer, [my mother] a seamstress and cook – could not afford registration costs, let alone the fees. I spent a year working informal jobs to raise money for my education,” he said. “I was able to attend the University of KwaZulu-Natal (UKZN) and completed a BSc and honours in microbiology.”

He was then offered a merit scholarship to enrol for a MSc at UKZN. However, he turned it down as he was unsure of his direction, and wanted to gain work and life experience before committing to a long course of study and eventual career.

In 2003 Ncayiyana decided to join UCT’s Institute of Child Health (ICH) as a research assistant. During his time at ICH, he lost both my parents. “One March morning in 2003, I got that dreaded call from my uncle that my father had passed away peacefully in his sleep the previous night. My mom passed away six months later. At 25 I’d become an orphan and breadwinner. Losing my father was devasting but losing both parents six months apart turned my world upside down.”

Looking back now, this experience was a turning point in his life. He decided to look for a stable job to support himself and his siblings.

“I then joined the Epidemiology and Surveillance Unit in the National Department of Health in 2004 to practice epidemiology in promoting population health,” said Ncayiyana. “While working there I enrolled for a part-time MSc in Epidemiology and Biostatistics at the University of the Witwatersrand (Wits). After graduation, in 2010, I was awarded a fellowship by Fogarty International Centre (FIC) of the United States (US) National Institutes of Health to train in tuberculosis (TB) epidemiology at Johns Hopkins University in Baltimore in the US.”

“At 24 I’d become an orphan and breadwinner.”

Ncayiyana’s pathway into academia came through intellectual and scientific curiosity. After several years in public service, he enrolled for a PhD in Epidemiology at the University of North Carolina (UNC) in the US.

“What I consider as my greatest achievement, both academic and personal, was obtaining my PhD, given both the intellectual challenge and the funding challenges. With only two years of funding to complete a four-year doctoral programme, I completed my coursework and doctoral examinations in an abbreviated schedule while working as a teaching assistant.”

His budding academic career started when he was appointed in 2014 as an associate lecturer at Wits as part of its Diversifying the Academy Programme. He was still completing his PhD thesis so this was a time of intense hard work and finding strategies to retain an elusive work-life balance.

“My research falls at the crossroads of epidemiology, causal inference and implementation science. Generally, I apply epidemiological methods to observational data to assess the role of multifaceted factors in disease patterns in different places and populations. A major focus of my ongoing research is the use and interpretation of causal inference methods and geospatial statistics in infectious diseases (TB and HIV) and cancer epidemiology,” he said.

“The end goal of this research is to develop or inform targeted evidence-based interventions to reduce the burden of TB, HIV and cancer.”

“My approach is informed and influenced by the principles and concepts of causal inference, spatial epidemiology and implementation science. The end goal of this research is to develop or inform targeted evidence-based interventions to reduce the burden of TB, HIV and cancer and to improve the quality of public health programmes.”

In February 2020 he attended the first FPP workshop in Stellenbosch together with 27 other fellows and was happy to find how helpful and stimulating it was.

“I look forward to being part of the Next Generation Professoriate, to sharing my experience and becoming part of an exciting future UCT.” 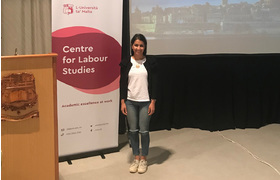 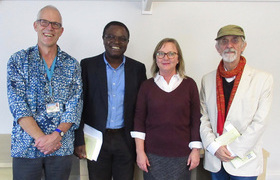 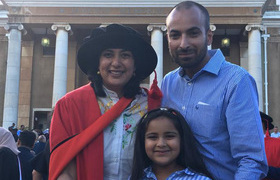