“When a person opens a door for you, it’s up to you to do something about it. I chose to seize the opportunity.” These are the words of Noziphiwo Sigwela, principal assistant for the University of Cape Town’s (UCT) Built Environment Library, who will be graduating with an honours degree in city planning.

She was also named the top student for the particularly challenging Planning Project A course.

Having spent 11 years behind the front desk of the light-filled library on the fourth floor of the Centlivres Building, Noziphiwo is no stranger to students of the built environment. In fact, she is often their first port of call in their search for the perfect piece of literature to inform, back up or round off a challenging assignment.

“It opened my eyes to how our environments affect us without us even being aware of it most of the time.”

“Over the years, I’ve had many students asking me specifically about ‘space’,” she said. “They’d ask me what space was and how to define it, but even though I could point them to the correct books, I never really knew how to answer these questions.”

Picking up on Noziphiwo’s desire to broaden her understanding of the field, Associate Professor Tanja Winkler, in the School of Architecture, Planning & Geomatics, invited her to attend one or two planning theory and practice classes.

“At first I didn’t really want to go,” recalled Noziphiwo, who completed her undergraduate degree in Library Science at the University of the Western Cape. “But I ended up finding the first class so interesting that Tanja suggested I enrol for the whole course.”

Within no time, she found herself developing an interest in planning and passed the course with flying colours. By the time the second semester of 2017 started, it didn’t take much for Winkler to convince her to enrol for another course.

Noziphiwo decided on planning law and, as they say, the rest is history.

“From there onwards, I was sold,” she said. “It opened my eyes to how our environments affect us without us even being aware of it most of the time and I began to see things differently.”

With two course credits already in the bag, she decided to register for the honours in city planning programme in the School of Architecture, Planning & Geomatics (APG) in 2018.

She was, however, quick to point out that it once again took a measure of convincing and cajoling from Winkler.

As a working mother of two young daughters, as well as being secretary of her church, making the decision to continue pursuing her studies was by no means easy.

She started by sitting down with library management to work out a schedule that would allow her to attend lectures while also maintaining her work hours.

“When a person opens a door for you, just do something about it.”

At home, she established a rigorous new routine of waking up at 04:00 every morning to prepare her daughters for school, get them to their transport by 05:00, start cooking supper and do some cleaning before leaving for UCT, where she would aim to do some studying by 06:30.

For the first time in her life, she employed someone to help her clean the house and do the cooking. “It was quite a mess! The house was so dirty – I actually had to get someone to help me.”

By 2019 she had only her practical courses left and had to spend more time working on projects in the EBE studio over weekends. On Sundays, she’d bring both her daughters – one in matric and the other grade 2 – with her to campus to make sure they were safe and taken care of.

During this time, she often found herself feeling guilty about neglecting church activities and friendships, but made a concerted effort not to let this get her down.

“It was so hectic, but you have to draw a line and learn to say no to certain things,” she said. “You have to learn to prioritise things and manage your time very well.”

Her dedication to the task at hand eventually paid off with Noziphiwo being top of her class for Planning Project A. This achievement came as a massive surprise to her, as the practical nature of the course had originally been a source of anxiety.

“I was so afraid of drawing. I had never drawn before and, in studio, it’s all drawing,” she recalled. “But I had a very good class in 2019. It was more learning together than getting high marks.”

Noziphiwo has already enrolled for a masterʼs in city and regional planning.

“I wanted to do something close to home. Something that I will enjoy and could also contribute to my background.”

In her thesis she will be looking at the role of women in the spatial planning and development of settlements that are under traditional leadership. She will be returning to her hometown of Cala in the Eastern Cape to conduct her research.

“I wanted to do something close to home. Something that I will enjoy and could also contribute to my background,” she said.

While her focus now is on her master’s degree, Noziphiwo has a clear vision for the future: She wants to complete her in-service training in Cape Town and then eventually return to the Eastern Cape to apply her knowledge as a planner.

She is a constant source of inspiration to her two daughters, as well as the students she encounters on a daily basis.

Her eldest daughter is studying accounting at the Cape Peninsula University of Technology this year and sees her mother as a role model of hard work and dedication.

When EBE recently shared the news about Noziphiwo’s achievements on Facebook, students – past and present – commented and shared their support in their droves.

While there’s some disappointment regarding the suspension of graduation ceremonies due to the coronavirus pandemic, there is also understanding.

“I am disappointed. This degree is not just for myself – it's for my kids, and the whole APG department. I wanted to be on that stage. They also wanted to see me there, but I also acknowledge the seriousness of the situation and I am being rational and understanding about it.”

Student developers ‘shift gears’ amid COVID-19 When the COVID-19 pandemic hit, UCT’s Developer Student Club was forced to think outside the box to remain relevant to its members. 05 Jun 2020

A time to build up Ugandan-born architect and scholar Dr Philippa Tumubweinee talks about women in architecture, creative impetus and her role as director of UCT’s School of Architecture, Planning & Geomatics. 05 Jun 2020 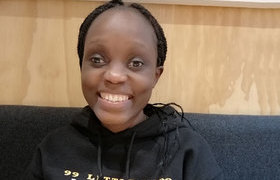