Three students with a passion for universal access to quality healthcare, and one with first-hand knowledge of struggling with ultra-sensitive skin, were crowned the University of Cape Town’s (UCT) top entrepreneurial minds at The Pitch finals on Thursday night.

The competition is an event run by the Academic Representativesʼ Council that gives students the chance to pitch their business or business idea and stand a chance of winning a monetary and mentorship prize.

4IR Mobile Clinic – the brainchild of Tlotliso Jonas, Namhla Juqu and Evans Tjabadi – took first prize in the Ideation category at the finals held at UCT on 9 May. Top honours in the Testing category went to Jasantha Singh for her product Aurora Rose.

The 4IR Mobile Clinic team identified poor access to healthcare facilities and lack of personalised medical consultations as a major problem in South Africa. Their winning idea is to address the challenge with a convenient, digitalised mobile clinic.

The mobile clinic is divided into sections. The first is where machines conduct vital-signs checks, such as pulse rate and blood pressure. The data is sent to the doctor in the second section, the examination area. The doctor uploads a prescription to the patient’s smart card and at the final set of machines, the patient retrieves their medication from a self-help dispensary.

Singh’s winning product was created out of her own frustration with the use of products too harsh for her ultra-sensitive skin. The cosmetic formulation scientist tried all the so-called natural products and visited numerous dermatologists before coming up with her own unfragranced Castile soap, which is now on sale. Singh is a cosmetic formulation science student in the Hair and Skin Laboratory, Division of Dermatology.

As winners in their categories, both 4IR and Aurora Rose won R25 000 as well as a six-month mentorship from the Allan Gray Orbis Foundation (AGOF).

Second prize in the Ideation category went to MyDoc mobile app and in the Testing category to Botlhale AI. The former aims to address healthcare access in Zimbabwe and the latter uses artificial intelligence in surveillance. Both won R15 000.

“Our view is that every student who graduates out of UCT should have an entrepreneurial mindset.”

The Pitch, UCT’s own version of the hit TV shows Shark Tank and Dragon’s Den which feature aspiring entrepreneurs pitching their service or product to a panel of potential investors, is run by the Academic Representatives’ Council and the Office of the Vice-Chancellor, in partnership with the AGOF.

Entrants received design-thinking training from the Hasso Plattner School of Design Thinking (d-school) and AGOF taught the finalists how to deliver the perfect pitch.

To be eligible, entrants had to be enrolled at UCT and have an idea that was in either the idea or testing phase.

In the “Dragon’s Den”

There were over 150 applications, eventually whittled down to the eight finalists who pitched their ideas and products to the judges this week.

Phakeng, who presented the winners and runners-up with their prizes, said the Office of the Vice-Chancellor supports initiatives like The Pitch because “entrepreneurship can reduce graduate unemployment to zero”.

“Our view is that every student who graduates out of UCT should have an entrepreneurial mindset.”

Addressing all the finalists, she said: “Win or not, it’s the journey that matters. Even if you don’t win the prize today, you have won greatly in the lessons and the workshops that were run in the last few weeks.” 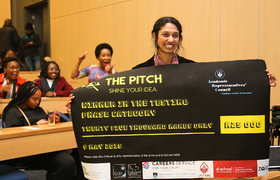 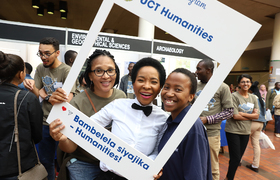 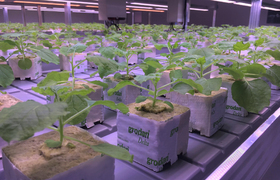 News
UCT puts its money behind innovation 06 May 2019 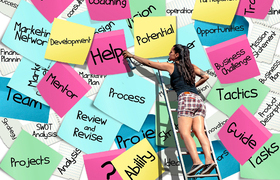