The blue in blue diamonds could be from the sea

Blue diamonds get their colour from small quantities of boron, a chemical concentrated in Earth’s crust, trapped within them. But we know diamonds form in Earth’s mantle – well below the crust – where temperatures and pressures are high enough to forge these hardest of stones.

So how, then, does boron land up in blue diamonds?

Diamonds are composed almost entirely of carbon, but trace quantities of other elements can give them colour; without these elements, diamonds are colourless. Boron imparts a blue colour, whereas nitrogen, for example, gives a yellow hue.

Blue diamonds, like the famous Hope diamond, have long been considered unusual, but exactly how or where they are formed has remained unknown.

A new study involving UCT geologist Professor Steve Richardson reveals that a geological conveyor-belt transporting minerals from the bottom of the ocean into Earth’s deeper mantle could explain how the boron ended up in these diamonds. The article was published in the journal Nature last week.

For the study, an international team of researchers, including Richardson, analysed the minerals trapped in 46 blue diamonds. Their results show that the diamonds likely formed in Earth’s lower mantle, as much as four times deeper than most other diamonds. Their analysis also suggests that the material from which the diamonds formed contained water and came from the tectonic plates beneath the world’s oceans.

Blue diamonds, they posit, grew in the presence of rocks that were once a part of the ocean floor.

Plate tectonics describes the large-scale movement of the pieces of crust that make up Earth’s outer shell and overlie the more plastic mantle. These plates move relative to each other and interact along their boundaries. At one type of site where tectonic plates collide, called a subduction zone, an oceanic plate is forced under another plate.

“A couple of years ago, we found that the world’s largest and most valuable gem diamonds, like the 3 106-carat Cullinan, formed from metallic liquid deep in the Earth’s mantle transition zone,” says Richardson.

These enormous and irregularly shaped diamonds that lack nitrogen contamination – and are colourless – were given the name CLIPPIR (Cullinan-like, large, inclusion-poor, relatively pure, irregular shaped and resorbed) diamonds.

“We then speculated that blue diamonds, which also tend to be large, could be part of the same story as the CLIPPIR diamonds,” explains Richardson. “They have boron in them, but no nitrogen either.

“This would mean that they might also be from very deep and the boron in them might be recycled boron because it's an element that's not very common in the mantle, whereas it's concentrated in the crust.”

The findings mean that blue diamonds are some of the deepest ever found. Moreover, they reveal a geochemical pathway that extends from the Earth’s crust – at the bottom of the oceans – into the lower mantle and provides a potential route for the cycling of Earth’s water. 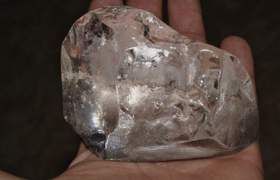 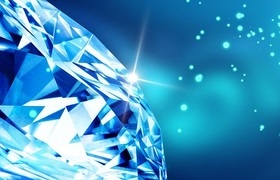