Income gap a case of dwarfs and giants

In his inaugural lecture at the University of Cape Town a few years ago, economist Martin Wittenberg showed a graphic originally constructed as a metaphor for income inequality in Europe four decades ago.

In 1971, Dutch economist Jan Pen took a person of average height (average income) and measured the population against that in the form of an hour-long march. He was describing the earnings distribution among businesses in the UK.

Instead of a steady parade of people of increasing heights, with many clustered around the average, it was a march of many dwarfs and a few giants.

Jan Pen's parade of many dwarves and a few giants

Now imagine Pen’s parade applied to SA, a country with much starker inequality. The results are breathtaking.

Wittenberg used a picture of himself at Green Point Park, with Signal Hill as a backdrop, as the "average" — a man about 1.8m tall — to illustrate inequality in 1993 at the end of apartheid.

It took 46 minutes for the marchers to reach average size, and by then, almost 30-million people had marched passed. A few minutes later, the marchers were giants. One minute before the end of the parade, they were the height of a four-storey building, and in the final minute, a few as tall as Table Mountain flashed past.

Recently, Wittenberg constructed another march, based on 2012 data from the Quarterly Labour Force Survey (QLFS) of employed and self-employed individuals, comprising about 12-million people. In a paper for the Research Project on Employment, Income Distribution and Inclusive Growth (REDI3x3) he describes his results:

"The dwarf leading this parade is not even 1cm tall. After a minute of the parade (and 216,000 individuals), the person passing by is still only 8cm tall."By the time a quarter of the parade has passed after 15 minutes and 3.2-million people, the height of the dwarf marching past is 38cm — around shin height. At the half-hour mark, the parade has reached double that height at 76cm, still below the belt," he wrote.

"It is only in the 45th minute that someone of average height comes past. The heights then increase rather rapidly. At the 50th minute, the height is at 2.91m, at 55 minutes we’re up to 5m and at the 59th minute, an individual 10.9m tall strides past. In the last four-hundredths of a second, the tallest person in the adjusted QLFS earnings parade comes by with a height of 144m." 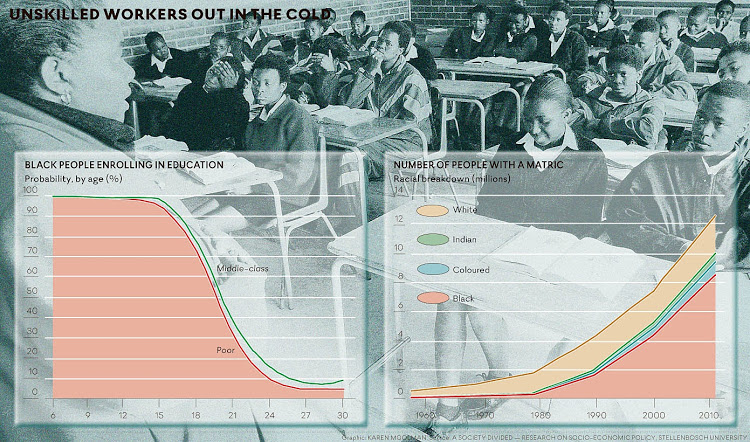 The challenge in providing world-class evidence, though, is in the measurements.

There is a concern that survey data tend to underestimate very high incomes — partly because being very rich is relatively rare and partly because the rich are less likely to participate in household surveys.

A team of REDI3x3 researchers were granted access, under stringent conditions, to the income tax data about two years ago, to estimate top incomes with more precision. Measured with the data from the South African Revenue Service, Wittenberg’s giant in the march’s final minute would be not 144m tall, but more than double that height – 300m.

Remarkably, since the first "march" computed on 1993 data of all South Africans and the march calculated on 2012 data of working people, there has been little change.

PEOPLE EMPLOYED IN THE PUBLIC SECTOR HAVE GENERALLY DONE BETTER THAN THOSE IN THE PRIVATE SECTOR.

It still takes 45 minutes for a person of "average" height to go past, and after 50 minutes, we are in a world of giants. "Inequality," writes Wittenberg, "hasn’t budged since the end of apartheid." In fact, it may be worse. One of the biggest drivers of persistent inequality is unemployment, as Southern Africa Labour and Development Research Unit (Saldru) director and REDI3x3 co-ordinator Murray Leibbrandt points out. The unemployed do not even feature in the 2012 "march". If so, they would be infinitesimally tiny.

Measuring by the tax data, the high incomes could be even higher than previously thought, lifting the Gini (in earnings) from 0.59 to 0.62, says Wittenberg.

Wittenberg and Andrew Kerr from DataFirst and Saldru are key among REDI3x3 researchers in producing, with Statistics SA, a publicly available data set known as the Post-Apartheid Labour Market Surveys (Palms) — a compilation of 50 data sets comprising several million records since 1993.

Using Palms and the tax data, they have been able to measure inequality more accurately, and also uncover its nuances.

The tax figures are important because it is harder to hide true earnings than in an income survey where top earners are usually shy or forgetful. Even asset indices, a common way of measuring inequality, are suspect: in the international Review of Income and Wealth, Wittenberg and Leibbrandt write that in one survey, cattle and donkeys were given negative values, an assumption that not only wipes out a chunk of rural wealth, but makes — on paper – those who own livestock poorer than those who own nothing.

So measurement is hard. But with the right tools, it has been possible to uncover some trends about earnings inequality that are staggering.

Perhaps the main one is that the median wage has hardly budged since the end of apartheid. But the top end has moved away from the median, while the bottom end has moved towards it.

Minimum wage legislation may explain the rise of the bottom end. But why the top end has rocketed is a puzzle.

One explanation is the "superstar" theory — when, say, a football player is paid at stratospheric levels. But Wittenberg says top incomes are rising in sectors where there are no "superstars" — corporate or accounting firms, for instance.

People employed in the public sector have generally done better than those in the private sector. Public sector employment has increased steadily since 2000, reaching 2.7-million people two years ago, or 18% of total employment.

Wittenberg and Kerr examined occupationally similar positions in the private and public sectors and found that at almost every rung — except at the very top — public sector workers earned more.

They are most likely African or coloured males in their late 30s, more educated than their counterparts in 1994, less likely to be unionised, in the private sector and more likely to work in trade than in manufacturing.

"They are positioned," says Wittenberg, "in areas where state intervention is least likely to help." Public education, a potentially significant state intervention, has been possibly the greatest disappointment of the democratic era.

"Instead of being the great equaliser we expected it to be 20 years ago," says Leibbrandt, it is the biggest driver of intergenerational inequality.

Leibbrandt has a graph that plots the relationship between the earnings of fathers and sons. It looks like the cliff at the start of a skateboard ramp — it tapers in the middle and rises again at the end, although not as sharply.

It depicts Intergenerational Earnings Elasticity, a measure of how closely your earnings match your parents’.

The other key graph is on education, produced by the socioeconomic policy research team at the University of Stellenbosch. It shows the opposite of the skateboard ramp.

It’s a low, meandering curve that rises steeply towards the right side and illustrates what economist Rulof Burger calls the "convex returns to schooling".

In other words, as years of schooling have increased, the returns in the labour market have become more unequal. It doesn’t matter whether you have one or five or nine years of schooling in terms of the wage you can expect. The big differences are made by matric, but especially tertiary education, when earnings shoot up.

About half of those who start school don’t make it to matric. As the demand for unskilled labour falls, these young people — despite having more education than their parents — are worse off in terms of occupational mobility.

There is a justifiable clamour in the political space. Those who should be focusing on policy interventions to give the postapartheid generation new hope are instead mired in battles over corruption and state capture.

That battle is critical. But so too is a keen focus on inequality, its causes and human consequences. Otherwise the march of the "dwarfs" will reverberate in even more painful ways.

The Research Project on Employment, Income Distribution and Inclusive Growth (REDI3x3) is a national research programme aimed at deepening understanding of the dynamics of employment, incomes and economic trends. By focusing on the interconnections between these three areas, the project seeks to contribute to policy reforms and development strategies that will address South Africa's unemployment, inequality and poverty challenges.

This article was first published on BusinessDay Live.
For licensing information please visit the source website.