How did the francolin evolve?

Dr Tshifhiwa Gift Mandiwana-Neudani, an ornithologist who first made her mark in the field at UCT’s FitzPatrick Institute of African Ornithology, has debunked a centuries old belief about the evolution of a common gamebird, the francolin.

In 1963 the English taxonomist Patricia Hall concluded that francolins evolved between 20 and 30 million years ago and were closely related. She placed them into a single genus – Francolinus – accordingly, recognising more than 100 species that warranted conservation action.

Mandiwana-Neudani, challenging this hypothesis, showed that francolins are evolutionarily much older and should be divided into two distantly related groups and one evolutionarily weird and unrelated species. She used anatomical and DNA-based evidence to make her decisive findings.

Mandiwana-Neudani conducted her research in collaboration with her PhD supervisors, professors Tim Crowe of the FitzPatrick Institute of African Ornithology and Rauri Bowie of the University of California-Berkeley; Professor Graham Louw of UCT’s Division of Clinical Anatomy and Biological Anthropology; Professor Paulette Bloomer of the University of Pretoria’s genetics department; Julia Wakeling, one of Mandiwana-Neudani’s UCT undergraduate students; and colleagues from Italy and Argentina.

The research was undertaken for her doctoral thesis, which she obtained from UCT in 2014, and was presented to a conference of the Southern African Society for Systematic Biology in July 2017.

It’s a significant finding that also debunks the 1758 suggestion by Carl Linnaeus that partridges and partridge-like birds, under the Latin binomial Perdix perdix, belong to one big family. The research showed that the birds we loosely describe as partridges are actually evolutionarily distinct groups of “smallish gamebirds with strikingly unexpected evolutionary affinities”, as Crowe put it.

Significance of the findings

“The research on the evolution of chicken-like gamebirds, francolins in this case, was entirely Prof Crowe’s concept, which, when sold to me, highlighted fascinating knowledge gaps,” reported Mandiwana-Neudani.

Given that these species are known to occur largely in Africa, with a few in Asia, she explained that a few questions needed to be investigated. Such as how francolins fit in the world’s gamebird evolutionary tree, whether the 41 traditionally recognised species actually share the same evolutionary path (as hypothesised by Patricia Hall), and whether the ancestral francolin was Asian or African.

“My doctoral thesis attempted to seek answers to these questions based on multiple [pieces of] evidence. When the news broke that francolins are not monophyletic, but instead form two distantly related evolutionary branches of which their divergence was much older than what BP Hall hypothesised, there was a need for an overhaul in what informed the conservation of these birds.

“The need to standardise the group names for consistent application among ornithologists was imminent.”

The news was generally not well received by gamebird farmers, gamebird enthusiasts and birdwatchers, however.

“They seemed comfortable to conform to the conventional understanding of the evolution of francolins,” Mandiwana-Neudani observed.

Mandiwana-Neudani grew up surrounded by natural beauty, and she says that this had a profound impact on her life goals.

“As a young village girl who grew up in Ha-Mandiwana in Nzhelele, (ex-Venda) Limpopo province, collecting firewood from the nearby mountains was one of the weekend chores,” she remembers.

“I always wondered that when a Burchell’s Coucal starts calling, it’s as if the wild has to be completely quiet. When this happens, my heart would be overjoyed, and filled with a sense of tranquillity around as felt by me and me alone.

“My love for nature, and birds in particular, was further realised during my undergraduate years at UNIVEN [University of Venda]. What stood out is how organisms are classified, eg birds and bats both fly but belong to different branches of the evolutionary tree.”

It was through the external examination process of an honours conservation biology module that Crowe “wooed” Mandiwana-Neudani into registering for an MSc in systematics and biodiversity. This programme was a collaboration between UCT, Stellenbosch University and the University of the Western Cape.

“Upon being approached, I . . . embraced the opportunity to register for a systematics master’s programme at UCT,” she said. “I saw this as an opportunity to be trained in a field of my interest.”

“In a way, Prof Crowe played a vital role as a mentor throughout my postgraduate life. On the contrary, his ill-health in the twilight of my doctoral study became my challenge. Fortunately, Professor Bowie offered an olive branch during this time.”

Plans for the future

Mandiwana-Neudani plans to become an established researcher in evolutionary biology and expand her interest in historical biogeography to include, particularly, Austral biogeography.

“I would like to take advantage of my recently established collaboration with the Centro de Ecología Aplicada del Litoral in Argentina. I find it fascinating that African and South American birds show convergence, eg in morphology and some ecological aspects. The plan is to focus on examples of species of birds endemic to South Africa and Argentina.” 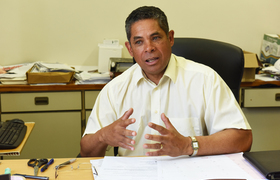