Professor Musa Mhlanga has received a grant for funding by the Chan Zuckerberg Initiative to contribute to a global project to map all the cells in the human body.

Mhlanga, of UCT’s Institute of Infectious Disease and Molecular Medicine (IDM), will be involved with the philanthropic organisation’s Human Cell Atlas project, an ambitious global collaboration that involves dozens of researchers.

“The Human Cell Atlas is not only going to revolutionise the way we see human biology, but it's also going to revolutionise medicine,” said Mhlanga, who was among nearly 500 applicants for funding. Mhlanga says he hopes to harness the opportunity to extend South Africa's involvement in collaborative, world-leading research.

Of the 38 applicants who were recommended for funding, only nine are from outside the USA.

The Human Cell Atlas will study and document the types, numbers, locations, relationships and molecular parts of every human cell. This will allow scientists to better understand how healthy cells work and what goes wrong when cells are not healthy. The data generated by the project will be made openly and freely available.

Mhlanga compared the significance of the Human Cell Atlas to that of the Human Genome Project, a 13-year, international collaboration to sequence the entire human genome.

“Once we have cellular resolution for the trillions of cells in your body, we will be able to say whether a particular cell signature or cell structure signifies the onset of Alzheimer’s or schizophrenia, or infectious disease, for example,” he said. “Diseases like mental illness will change dramatically because we will have the ability to peer into the brain and understand the onset, and potentially how to rebalance things.

“This will be absolutely transformative. And that's just giving you a glimpse of the possibilities that the Human Cell Atlas will create.”

The Mhlanga Lab’s funding enables it to explore and develop tools that will be applied in the project’s future phases of mapping and characterising all human cells.

They are developing a technique that they hope will apply cell biology methods in a novel way to visualise – at the level of an individual cell and single molecules – the relationship between where ribonucleic acid (RNA) is located in a cell and where proteins from that RNA are located. RNA is a molecule similar to deoxyribonucleic acid (DNA), both of which carry genetic code which dictates how proteins are constructed and thus how bodies are built.

If successful, the new technique will help to answer questions like where RNA goes in the cell once it has been made, where in the cell proteins are made, and where proteins move to once they are made.

The Human Cell Atlas project, with its global reach, could make a groundbreaking impact on the understanding of human disease and medicine.

“It’s an opportunity for Africa to participate in high-impact research – a region that normally isn’t involved in this type of work,” said Mhlanga. “It’s a way to make scientific knowledge creation, and access to it, more equitable.

“This grant is another step in my personal journey to make an impact and contribute positively to developing basic scientific research and knowledge creation in South Africa.” 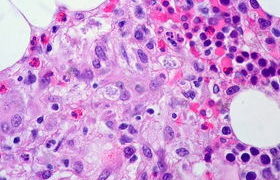