13 April 2017 | Story Stephanie Midgley
As the 2016/17 fire season in the Western Cape draws to a close, what can we take from the experiences of one of the worst seasons in recent history? Are we moving towards a future where extensive and destructive fires become the new normal? How should we respond?

Fire is an important part of the landscape in this province. It has been a key driver of ecosystem structure and function in the fynbos and renosterveld shrublands for millions of years. Local research on the relationship between fire and ecosystem services, such as water supply and nutrient cycling, has laid a solid foundation for rational policy and management approaches. Despite this understanding and the response capacity developed over the last decades, we came exceptionally close to losing the battle against extreme fires early this season.

In November-December 2016, a series of devastating fires raged, often simultaneously, across several areas of the province (Figure 1). The damage to natural vegetation, grazing, agricultural infrastructure such as fencing and water pipelines, and a range of crops and fynbos was severe, with over 120 000 hectares destroyed. The agriculture and tourism sectors were particularly impacted: losses included four manor / guest houses, many other farm houses and outbuildings, a wine cellar and tasting room, and large portions of vineyards and protea plantings. In addition, damage was inflicted on guest rondavels at Goudini Spa resort, olive groves, pine forests and mountain bike tracks. The knock-on impacts will be felt for many years to come, both for the affected businesses and for the wider local economy and jobs. 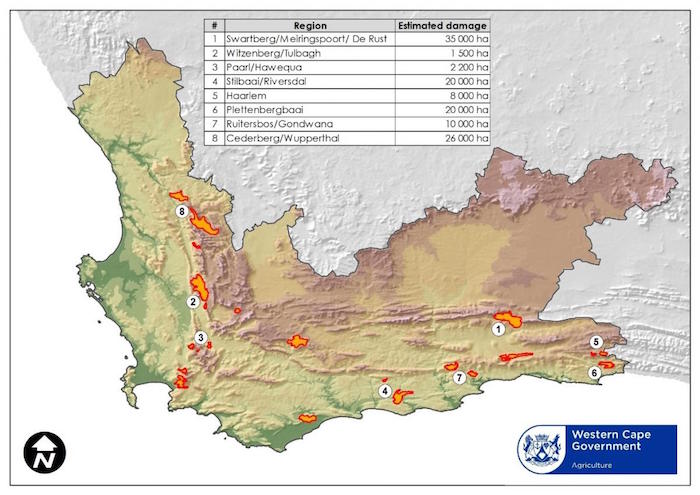 What explains the extraordinary ferocity and duration of some of these fires in late 2016? The most obvious factor is the extended drought which has gripped the region since 2015, with two successive below-average winter rainfall seasons. This is on record as the worst drought in at least 100 years. Combined with the two hottest years on record globally and in parts of the Western Cape, the vegetation was unusually dry. In addition, strong winds fanned the flames and made it extremely dangerous to deploy fire-fighting helicopters. Sadly, the human factor played a major role: a high percentage of the fires are believed to have been started through arson or human negligence.

Scientists have shown that the experiences of the Western Cape are by no means short-term or local phenomena. Evidence is emerging that the underlying risk factors for fire are increasing globally due to climate change. Climate change influences wildfire activity via four mechanisms: i) with increasing temperatures and the likelihood of more severe heat waves and droughts, vegetation desiccation is more rapid and this leads to higher flammable fuel loads; ii) rising atmospheric carbon dioxide concentrations favour the rapid growth of woody shrubs and trees, thus increasing the fuel load; iii) increasing wind speeds and duration of very windy days in some regions lead to greater fire risks; and iv) climate change will lead to higher rainfall in some regions, with an increased rate of biomass growth and higher fuel loads; The climate change projections for the Western Cape support the first three mechanisms, with the battle against alien invasive trees of major concern.

A recent study for the period 1979 to 2013, using three daily global climate data sets and three fire danger indices, reported an 18.7% increase in the average global length of the fire season, with longer fire seasons occurring over 25.3% of Earth’s vegetated surface. The study confirmed that the fire season has lengthened in the south-western Cape. When the changes in climate and fire risk are coupled with larger and drier fuel loads and ignition dangers, the conclusion is that fire danger is likely to increase in future over much of the globe. Local research shows that the frequency of wildfires is likely to increase substantially in the hotter, drier conditions expected over much of the Western Cape. High fire risk conditions are projected to increase by up to 40% in the west, and almost triple in the east of the province.

Historically, the focus in the Western Cape has been on the impacts and management of wildfires on natural areas, particularly those managed as conservation areas and where dense stands of alien invasive plants create a high fire risk, and the boundary between built-up settlements and the fire-prone vegetation. The 2016/2017 fire season has resulted in a greater appreciation of the risks posed to the agricultural and tourism sectors. Losses in these sectors take many years to recover from, with job losses along the way. Increasingly, valuable vineyards and orchards are becoming embedded in, or border on, the fire-prone fynbos. Simultaneously, towns and smaller settlements are growing with an influx of job seekers, and previous rural-urban boundaries are shifting and fading, creating greater sources of ignition and exposure for life and property. The stark social and economic impacts have been a wake-up call to politicians. But why were they sleeping?

Ever since climate change first became a topic in the Western Cape, marked by the first provincial report (A Status Quo, Vulnerability and Adaptation Assessment of the Physical and Socio-economic Effects of Climate Change in the Western Cape; Midgley et al., 2005), every climate change policy document highlights the rising threat of wildfires and response measures needed to contain and manage the risks. More recently, an understanding has developed of the integrated impacts of climate change and fire, for example on the health and safety of communities. Fires pose a real threat to sustainable development and economic growth, not least due to the enormous resources needed to fight them, which are then lost to potential development projects. These opportunity costs require proper quantification before decision makers will act with more urgency. We need greater investment in risk reduction actions and awareness raising. An excellent opportunity has arisen after the recent fires to keep the burnt areas (mountains and farms) free of alien tree regrowth, and to manage the catchments optimally. This will reduce fire risks in future and restore healthy hydrological processes to increase our water supply. Further actions focused on the agricultural sector are proposed in the SmartAgri Plan 2016 (Strategic Focus Area 2, Objective 2.3: Build local capacity in firefighting and fire risk reduction).