Archie Mafeje: never to be forgotten

In May of 1968 the UCT Council approved the appointment, unanimously, of Archie Mafeje to the role of senior lecturer in social anthropology. But one month later, and following significant pressure from the apartheid government, the council was forced to rescind its offer.

This move resulted in widespread protest action, culminating in a nine-day occupation of the Bremner building by 600 students.

This respected pan-Africanist, regarded as one of Africa's greatest social scientists, was never able to return to and take up a post at his alma mater. This was a failure for which the university offered a sincere apology after his death.

This was a turning point for UCT, which was criticised for bowing to the pressures of a racist government and for not standing up for the values espoused by the university.

Unable to abide by its decision to appoint Mafeje, the Council established the Academic Freedom Research Award in his honour instead. They erected a plaque, making note of the day that the apartheid government had removed the university's right to appoint lecturers at its own discretion. 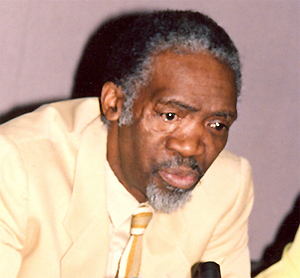 In 2000 Mafeje finally returned to South Africa to take up a post at the University of South Africa. Photo UNISA.

Mafeje did not begin his university career at UCT. Born and educated in the Eastern Cape, he spent a year at Fort Hare University before he transferred to UCT. He began studying zoology, but switched swiftly over to social anthropology. His studies were complemented by thorough political education and by the time he had graduated from UCT with his master's degree, his enthusiasm for politics had only increased.

Emeritus Professor Francis Wilson, then the university orator, wrote: “His Unity Movement background gave him a life-long capacity for incisive analysis; a deep suspicion of the state, particularly of the Stalinist variety; and a cheerful willingness to be politically incorrect and to be a trenchant critic of anybody whom he suspected of any kind of racist or imperialist thinking.”

Mafeje spent 30 years in exile, teaching and writing prolifically: from critiques of his own subject, anthropology, to articles on agriculture, tribalism, imperialism and the poverty of rural Africa.

In the 1990s, after the return of those in exile, Mafeje was urged to return to UCT by his colleagues. But he felt the senior research fellowship offered to him did not meet his seniority, and so declined.

He attempted to return to the university again in 1994, but was unsuccessful in his application for a position. This resulted in a breach between UCT and Mafeje that lasted until his death in March of 2007.

In 2008 UCT awarded him a posthumous honorary doctorate of social science. In the citation, Wilson wrote:

“This then is the man, armed with a Cambridge PhD and a classic published urban study, whose appointment as a senior lecturer was rescinded by the university Council after pressure from the apartheid government in 1968. This is also the man for whom in the early 1990s we (and I include myself) at UCT all failed to provide the appropriate space to enable him to come home to teach and write as he so badly wanted to do.”

He continued: “Today the University of Cape Town has apologised for these sins of commission and omission with regard to Archie Mafeje, whose family has graciously accepted the apology.”

Never to be forgotten, and in due recompense, Mafeje was further memorialised through the renaming of the Senate room where the protesting students staged the 1968 sit-in.

The Archie Mafeje Room serves as a constant reminder to Senate of its obligation to ensure that the university space is open and supportive to all.