SASSA - no safety net for beneficiaries

The consequences of social grants being paid late or not being paid at all would be “enormous” for the 17 million or more beneficiaries, most of whom have no other income or savings to tide them over, says UCT's Professor Jeremy Seekings.

“Indeed, we know that some very poor people spend their grant income before the end of the month, and then live hand-to-mouth until they are paid the next month's grant,” says Seekings, who is based at the Centre for Social Science Research.

The South African Social Security Agency (SASSA) is constitutionally mandated to pay social grants to millions of impoverished South Africans. A contract to do so, which was signed with Cash Paymaster Services (CPS), was declared invalid by the Constitutional Court in 2013 after the court found irregularities in the tender process.

The contract was subsequently shortened by the court and is due to expire at the end of March 2017. Despite SASSA's assurance in late 2015 that it would be ready to pay the grants by 31 March this year, it recently admitted it had no such plan, leaving millions of vulnerable South Africans at risk.

Are there interventions – either from government, universities or civil societies – that would act as a buffer if neither the national department nor CPS paid the grants in the coming months?

“Hardly,” says Seekings. Both government and private charities could organise food parcels, but not on the scale of the grant system, he says.

“Remember that grant payments entail distributing more than 17 million grants per month, with a total cost of about 3% of GDP,” says Seekings. “This is a massive operation. What is extraordinary is that SASSA generally succeeds in 'paying the right social grant, to the right person, at the right time and place', as they aspire to do. This is one of the few parts of the South African state that operates with exemplary efficiency.”

Can the immediate crisis be resolved?

“The immediate crisis can surely be resolved, albeit probably at a high price to taxpayers, who will be boosting the profits of an unscrupulous, profiteering multinational company,” says Seekings.

“It is a tragic irony that Minister Dlamini, who likes to attack 'white monopoly capital', has herself done so much for 'monopoly capital',” Seekings observed. “The more serious issues are the undermining of the rule of law – in that the minister has effectively disregarded the Constitutional Court.”

Seekings agreed that there are two issues at play: one is the short-term imperative to have the grants distributed on time over the next year, and the second being a long-term imperative to ensure that this is done regularly, fairly and with due process observed.

As to what mechanisms are in place to ensure this happens, he can't say. 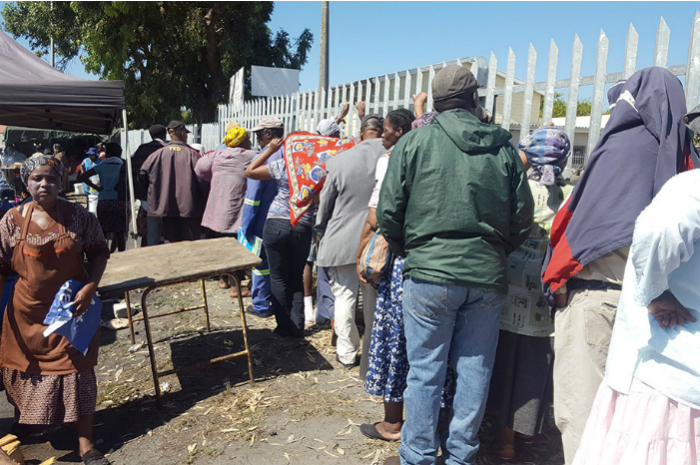 Professor Pierre de Vos, who teaches constitutional law at UCT, wrote about SASSA's decision not to approach the Constitutional Court with a request to extend CPS's contract. He said that their decision was “difficult to understand”.

Although the Constitutional Court ruled in 2013 that SASSA's contract with CPS was invalid, CPS has since continued to pay the grants and to profit from the contract. A task team of cabinet ministers recently threw out a two-year deal between SASSA and CPS that would have seen CPS paying the social grants from 1 April this year. Social Development Minister Bathabile Dlamini insists that her department did not need Constitutional Court approval to make this deal.

“If the Constitutional Court is not involved and SASSA enters into a new contract with CPS, the contract would almost certainly be unlawful and invalid,” says de Vos.

Poverty in South Africa is the result of maldistribution – more specifically, unemployment “and, to a much lesser extent, low wages for the working poor” – and is mitigated by redistribution, primarily through grants, says Seekings. “Without grants, poverty rates would rise rapidly.”

The social grant system, then, is a backbone of the post-apartheid drive for redress and economic equity, enshrined in the Bill of Rights, and the state is obliged to pay them.

Social grants play a pivotal role in cushioning the harshest and most unjust effects of the huge inequality, “largely racially based, that still plague our society”, says de Vos.

“The problem is that the Constitution and the courts that enforce it cannot govern the country,” says de Vos. “Ministers and their officials must make and implement policy for the betterment of society.”

In November 2015, SASSA assured the Constitutional Court that it had a plan to pay the social grants when the current contract with CPS expired on 1 April 2017.

So what kind of legal safety nets are available to both remedy and prevent irregular conduct such as the SASSA and CPS contract?

This is a matter for the National Assembly to hold office-bearers accountable, says de Vos. They could pass a vote of no confidence, which would force the entire cabinet to resign.

“The most effective remedy lies in the hands of voters who can decide to lend their vote to another party if they are upset by the conduct of members of the government,” says de Vos. 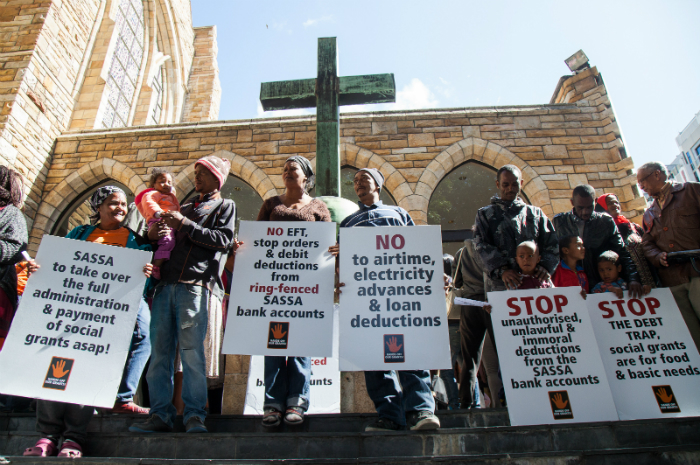 The public outcry against SASSA's management of the social grants has been long-running, as this photo from October 2016 outside St George's Cathedral in Cape Town shows. Photo Ashraf Hendricks / GroundUp. (CC BY-ND 4.0).

Children at the mercy of SASSA

Approximately 70% of South Africa's children depend on SASSA grants for nutrition, health and survival, according to UCT's Children's Institute. The uncertainty about social grants being paid on 1 April will not only directly affect these children, but also places at risk “one of the most successful poverty alleviation programmes in the history of South Africa”, as the institute described the Child Support Grant (CSG).

“Although the value of the CSG is low at R380 per month, even this small amount has been associated with improvements in nutrition, health and education outcomes for children,” says Aislinn Delany, a senior researcher at the Children's Institute and lead editor of the South African Child Gauge 2016. “Any disruption to the payment of grants would impact negatively on the ability of millions of families to feed and care for their children.”

A question of ethics

“The ethical problem is that SASSA has created a situation where a private company is making large profits from fulfilling the functions of an organ of state,” says de Vos.

The state may decide how to have the grants paid, however, with public–private partnerships not precluded.

“Questions may, of course, be asked about the wisdom of the policy choice made, given the fact that CPS is a private company who earns billions of rand, directly or indirectly, of taxpayer funds to do what the state is required to do,” says de Vos.