Medicine and science in harmony after seven years

Growing up in a missionary family where he was exposed to the sick and vulnerable in rural communities, Matthew Amoni always knew he wanted to be a doctor and help people. But he also loved the thrill of inventing things and fell in love with aeronautical engineering at a science fair.

It took a canny biology teacher (a medical doctor on a teaching 'sabbatical') to persuade the teen that there was place for both in his life. Back then, Amoni never imagined he'd be able to combine his twin interests in an interwoven degree programme that's yielded a BSc (Med) (Hons), a master's degree in cardiac physiology, and an MBChB, all by the age of 25.

Seven years was all it took.

He is now preparing to jet off to Belgium to begin PhD studies in the laboratory of renowned cardiologist Professor Karin Sipido, editor-in-chief of the Cardiovascular Research Journal.

It's been a wild ride. UCT's Faculty of Health Sciences calls it the Clinical Scholars Programme.

Launched in 2011 by professors Bongani Mayosi (now dean of the Faculty of Health Sciences) and Arieh Katz (Department of Integrative Biomedical Sciences), the programme is designed to address the country's critical shortage of academic clinicians and revitalise clinical research.

The programme fast tracks MBChB students into clinical research – they squeeze in an honours degree during their medical studies and then start PhD research degrees.

Amoni did things a little differently. He went on to do his master's degree in cardiac physiology, in tandem with the last two years of MBChB, so that he could step straight into PhD studies in the field.

How to help a community

But return for a moment to the dream that ignited him as a youngster.

Through his parents' missionary work, Amoni was exposed to Doctors Without Borders and often visited the local clinics. One day a family friend, a medical registrar, took him around the hospital wards. It was a life-changing introduction.

He was fortunate to have a mentor in Dr Johan Lombard at Pretoria Boys' High.

“He helped mould me and see how medicine fits into science and how they are linked, which hadn't yet dawned on me.”

These were conversations Amoni recalled after he'd arrived to study medicine at UCT in 2010. By second year and grafting hard, Amoni said he'd lost his sense of calling; studies had become mundane. Something was missing.

“I'd started thinking I was in the wrong field – that happens to a lot of students in second year. I wondered: should I go back to science?”

It was fortuitous that second-year students sign up for the Special Study Module, which introduces them to research methods. Working with Dr Asfree Gwanyanya, Amoni started a modest electrocardiogram (ECG) project on how ECG signals change during surgery.

“My dormant love of science and engineering was awoken. I could explore questions and hypotheses. Here was the chance to be driven by something other than the fixed schedules of medical studies.”

Fortunately, Katz had just pioneered the Clinical Scholars Programme. Amoni began to see the possibility of weaving science into his medical studies in an honours year, sandwiched between the third and fourth years of the MBChB programme.

“I was so excited to be doing things with my hands and seeing how things come together. You could ask and answer your own questions in the lab. And I was soon introduced to the world of sciences that complement medicine: proteomics, histology and stem cells, biochemistry and physiology.” 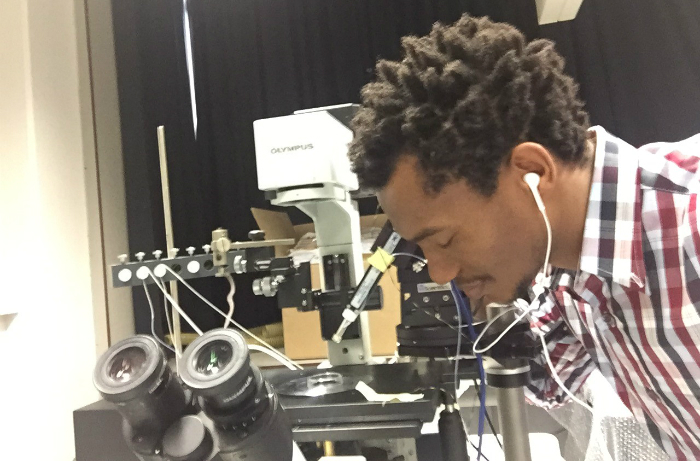 Asking and answering his own questions: Matthew Amoni in the lab where he was introduced to the world of proteomics, histology and stem cells, biochemistry and physiology. Photo Supplied.

Then head of the Department of Medicine, Mayosi highlighted the need to drive research from an African perspective. Although a year is a very short time to really learn the scientific methods, Amoni decided that it would be a good investment.

He received a scholarship that took him to world-renowned cardiologist Professor Karin Sipido's laboratory in Belgium for three months. There he had a crash course in membrane biophysics, which is usually reserved as a specialised technique for PhD students. An even bigger thrill was being able to bring the new technology home.

In 2014 Katz recommended that Amoni take a few years off from his medical studies to continue with science and return to medicine afterwards. But Amoni decided on another solution: he'd do a master's degree in cardiac physiology while completing his MBChB.

Katz thought he was crazy, but said that if he could find a way to do it, and persuade the curriculum head, he'd back him.

Some of the faculty said it was impossible, and there was much wrangling with various health sciences committees and university authorities, but Amoni was finally invited to submit his academic transcripts and a motivation to Senate.

The heart of matters

“I was so excited that week I went straight to the lab to start working.”

“I spent a lot of my December vacation in the lab; at that time, it was quite small and I designed and built some of the equipment and experiments.”

As he progressed, he found it easier to engage with the medical aspects of his work. His marks got better and he passed his MBChB finals as well as his master's with distinction.

His PhD studies in Belgium will focus on understanding the microscopic electrical circuitry of the heart, hoping to improve understanding of conditions such as arrhythmias, which account for almost half of all heart-failure deaths. The technology to study cardiac cellular electrophysiology doesn't exist in South Africa.

“Understanding these problems from the bedside and developing treatments for them on the lab bench is crucial,” says Amoni.

“Some of the research I did in my master's, though incomplete, was substantial enough for me to be able to present at a conference. I studied potential new drugs that will help us manage these arrhythmias better and I'm looking forward to finishing that work and building on it.”

The past seven years weren't all work and no play; Amoni enjoyed a rich student experience. He hung with friends, and participated in the Students Health and Welfare Centres Organisation (SHAWCO), heading up the research portfolio and Bellville clinic in his final year, and conducting research on how medical students benefit from a stint with the student-run outreach programme. 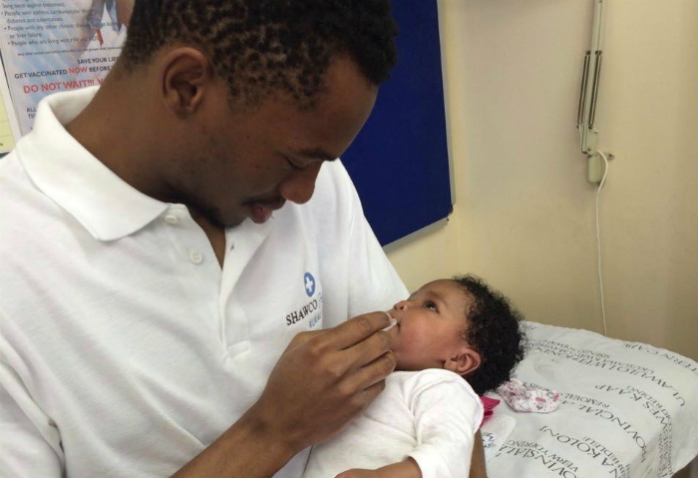 Matthew Amoni attending to one of the many patients he helped during his time working with SHAWCO. Photo Supplied.

Friends became his mentors and supporters.

“When I was working late in the lab, friends would bring supper across from my residence. And when I was trying to figure things out and getting discouraged, they'd listen and say, 'Okay, this is how we're going to do it.' Without them I couldn't have done even half of what I did, and without God I couldn't have done any of it.”

“We'd often find each other in the lab late at night and keep each other company. He'd get excited about something they were doing in the lab and he'd show me these new techniques. It kept me going when the going was heavy.”

When Amoni gets back from Belgium, he's keen to pursue surgery. There's lots of demand for too few cardiac surgeons.

“It's completely captivated me. I'm trying to see how science fits in with that.”

But first there's the deferred two-year internship to be tackled. Then he's hoping to get into a department where he can plant some roots and see where he can add to the body of medicine.

His parents, John and Mary Amoni, are still working as missionaries. His graduation ceremony in May, when he'll be receiving a master's degree in cardiac physiology and his MBChB, is keenly anticipated.

“My mom is still excited. She says I have to be there − and she has to come and scream when they call my name and I get hooded. It's a rite of passage to closing a chapter and starting a new one. Hopefully we can have that family experience together.”