The last five years of rainfall measured at the Cape Town International Airport has been 30% below the average compared to the years from 1979 to 2000 (378 mm per annum as opposed to 527 mm). The city is drier.

Not only is there a decrease in the rainfall averages, but at least 25% of the total rainfall for the year fell during one month of the year followed by seven months of below average monthly rainfall, sometimes by as much as 50%. Rainfall patterns are uncertain and less predictable, which is consistent with climate model predictions. Water storage levels in the six major dams supplying water to Cape Town and the surrounding region have declined each year.

The City of Cape Town has dealt with dwindling water supplies by implementing a Water Demand Management programme that includes increasing block tariffs, fixing leaks, reducing pressure and educating consumers. The programme has achieved impressive results. Despite a rising population, urbanisation and increasing demand, the growth in water demand has been restricted to just 2% per annum. In 2015 the City received international recognition from members of the C40 Cities on its leadership on climate change, and rightly so.

However, supplying more water and containing the demand is clearly not enough. By 2019 Cape Town's water is likely to run dry unless supplies are augmented further, but most of all, unless consumers adapt to a new norm.

Ohlsson and Turton (1999) provide some thoughtful provoking theory in a paper entitled “The Turning of a Screw”. They explain how water resource management moves through four distinct phases: 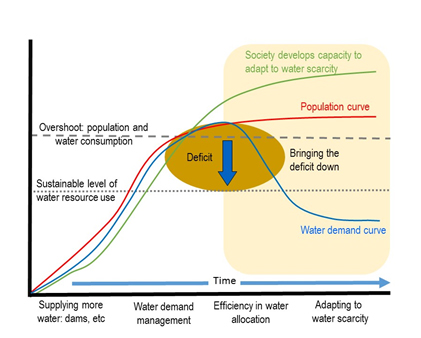 The sequence of phases from water supply to adaptation (Adapted from Ohlsson and Turton, 1999).

Struggling to make the change

What makes it difficult to shift from a supply mode (getting more water) and water demand management modes to the next phases? Why are we struggling to shift?

The water deficit lies at the heart of the struggle to ensure that consumption is aligned with available water resources and those that are planned for the future. Dealing with the deficit begins with an integrated water management approach that recognises that all water is valuable, that there is no such thing as 'waste' water and that a diversity of water sources are acceptable. This phase requires a huge increase in human and financial capacity to regulate the allocation of water fairly, and to have systems in place that are capable of penalising offenders, but more importantly to create new channels for the development of proven, reliable green technologies.

The business of managing our water resources is no longer the domain of institutional authorities, but is shared in a strong partnership between local government, the private sector and the public. These are the prerequisites to enter the final phase: the shift from efficiency to adaptation. A key feature of the final phase is a reduction in population growth, urbanisation and water demand, and most of all, it is demonstrated by the capacity of society to adapt to using water sustainably.

The importance of adaptation

There is no denying that the challenges are enormous. Factors such as population growth, urbanisation, increasing water demand and climate change are holding back the move toward adaptation. Closely following these factors is a value system that is characterised by lawlessness, corruption, a lack of accountability and behaviour that seeks to opt out of contributing to an ailing public system and inefficiencies.

However, in the long term, adaptation is essential. It will require bold new leadership to steer the city and its citizens into this era of uncertainty. It will also require fresh investments and programmes that are directed specifically to building the capacity of institutions and society to embrace new green technologies in water management.

We are struggling to achieve the next phases of water management because the vision is constrained by crisis management and short-term political mandates that are marred by five-year plans and programmes. The struggle will not be achieved by increasing water supply or managing the demand alone, but by reducing the water deficit and by adapting to water scarcity without doing harm to human health, ecosystem services and the environment.

It is a long-term vision that is missing. It is a vision that goes beyond future plans for increasing water supply to one that recognises the need to develop the capacity of society to adapt to water scarcity so as to ensure the well-being of the city and region.