Mega diamonds, such as the Cullinan and Koh-i-Noor, may be worth a king's ransom for their rarity, size and purity, but for isotope geochemist and geochronologist Professor Steve Richardson they provide tantalising clues about the evolutionary timeline of our planet.

And this is a story that begins a long, long time ago, says a paper Richardson co-authored, which is featured on the cover of Science (16 December 2016).

Estimated to have been formed over two billion years ago, the enigma of these gems has absorbed Richardson for most of his academic career. The latest paper is his second cover story in Science, and he has also had two cover stories in Nature.

“This is a big one,” he commented. “It's what we live for; the peak of what we want to do in science.”

Richardson's Nature cover articles on diamonds in 1984 and 1986 launched his career. Since then he's published many high-profile articles in both journals. He's begun to unlock secrets of the Earth's deep mantle that have eluded geologists since the theory of plate tectonics was first advanced in the 1960s. Following this breakthrough, geology emerged from the “Dark Ages”, Richardson quips.

The enormous type II diamonds (so-named for the absence of nitrogen) that he and his colleagues have been studying are distinctive in their makeup and origins, and they hold the key to understanding the chemistry of the Earth's deep mantle during its early evolution. 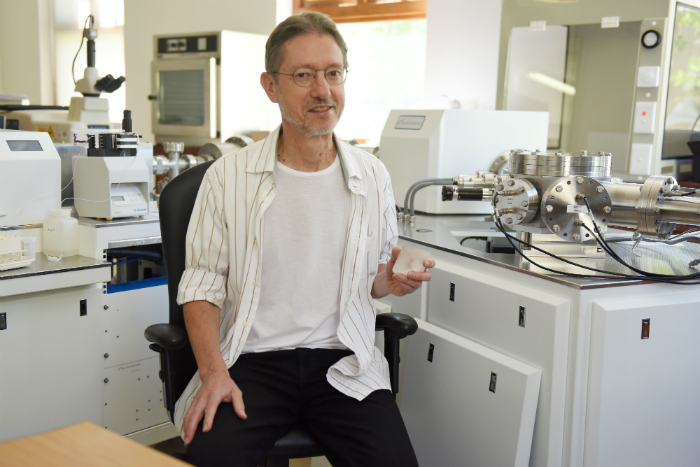 Mega diamonds like the Cullinan and Koh-i-Noor are exceptional for their size and purity and also their irregular shape, quite unlike the typical octahedral diamond form that Prof Steve Richardson demonstrates here. Photo Robyn Walker.

While diamonds themselves don't yield much information about their source and age, the rare inclusions trapped inside them do. Birthed within liquid metal pockets in the Earth's deep mantle, these giant gems (characteristically larger than 5 cm) were unconstrained by solid rock and, as they grew, they enveloped the tell-tale metal and gas inclusions that get geochemists really interested.

Richardson and his co-authors found inclusions of iron surrounded by reducing gases, providing direct evidence of a metal precipitation reaction that requires a highly reducing (oxygen-deficient) mantle. This has to do with reduction-oxidisation reactions in the mantle, which is important to both the mineralogical composition and chemical state of this region of the Earth.

These “genetically distinct” mega diamonds, which were carried to the Earth's surface by ancient kimberlite eruptions, provide direct samples of these metal-saturated regions of the mantle. They also confirm what geologists have long suspected: that the presence of iron phases would have profound effects on the physical and chemical properties of the Earth's deep mantle.

“Until now physical evidence for such reducing regions of the mantle has been almost nil as the deep mantle is pretty inaccessible to scientists,” said Richardson.

Clues from the deep

Gem diamonds like the 3 106-carat Cullinan stand out because they are so pure – they don't have any nitrogen, which usually colours diamonds a yellowy brown. They are also irregularly shaped and don't follow the typical octahedral diamond profile. As such, they're grouped as CLIPPIR diamonds (it's an acronym). The diamond illustrated on the cover of the 16 December 2016 issue of Science is from Angola's Lulo mine, a 7 cm 404-carat oblong stone. 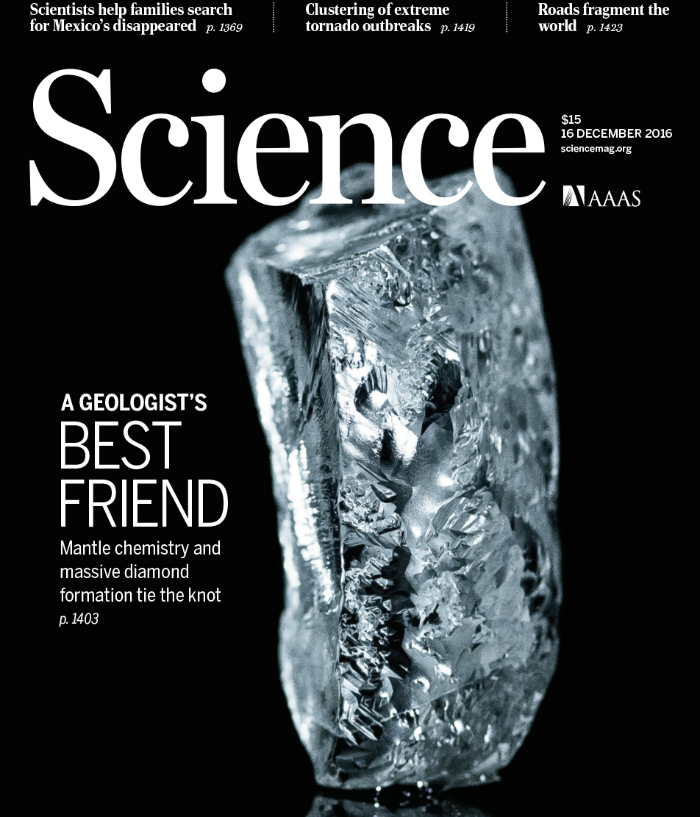 The cover of Science (16th December 2016) features a giant diamond – a 7-cm tall, 404-carat oblong stone from Angola's Lulo mine. Image Reprinted with permission from AAAS.

To make their findings, the authors studied 53 CLIPPIR diamonds with metal and gas inclusions; 38 of these showing magnetic metals trapped within. They then micro-analysed five inclusions, which were exposed after the samples had been polished down.

Inside these stones they found iron, nickel, carbon and sulphur, as well as dissolved methane and hydrogen gas, all indicating a highly reducing mantle environment. The presence of unusual garnet inclusions in some of the diamond samples showed just how far down these mega diamonds are formed – possibly up to 750 km below the surface, as garnet is not stable at deeper levels.

“This suggests that CLIPPIR diamonds may form within the mantle transition zone at 410 to 660 km depths – deeper than common diamonds,” Richardson noted.

The Cullinan diamond from the Premier Mine kimberlite most likely grew in extreme pressure-cooker conditions: 1 500°C at a pressure equivalent to 250 000 atmospheres. According to lead author Evan Smith, it could have formed up to two or three billion years ago and then reached the Earth's surface 1.2 billion years ago.

It must be added that getting hold of mega diamonds to study and work on is nigh impossible. For example, the Cullinan diamond was cut into nine stones, two of which are part of the Crown Jewels and under lock and key in the Tower of London.

Here the collaboration with Smith proved very useful. Smith is a postdoc attached to the Gemological Institute of America (GIA), which has managed to buy offcuts of some mega diamonds as well as examine many other such diamonds submitted to the GIA for grading.

But dating the CLIPPIR gems to when they actually crystallised in the mantle will be Richardson's next analytical challenge. Their unique metallic inclusions hold the clues.

“The inclusions were trapped by the diamond growth and that's when the isotopic clocks were set.”

“All these gemstones are versions of rock-forming minerals that we teach our students about. So we emphasise the importance of mineralogy to geology.”

Over the years he has built strong academic links with the Carnegie Institution for Science in Washington DC, where he spends his sabbaticals.

“One of the things I like to do when I'm in Washington is to visit the Smithsonian Museum of Natural History's Mineral Gem Gallery [it has 375 000 mineral specimens], to pay my respects to the 45-carat Hope diamond – my favourite.”

The Hope diamond is unique for its size and colour – a deep blue thanks to the boron in its chemical makeup. It was found in an alluvial deposit in India and the diamond made its way into Europe in the 14th and 15th centuries and travelled around the world, traded by men who made and lost fortunes (the stone was labelled as a curse by some). Its last owner donated the gem to the Smithsonian in 1958.

“We're speculating that blue diamonds, which also tend to be large, are part of the same story as the CLIPPIR diamonds,” added Richardson. “They have boron in them, but no nitrogen either. We speculate that they might also be from very deep and the boron in them might be recycled boron because it's an element that's not very common in the mantle, whereas it's more plentiful in the crust. We think it's been recycled back down.”