Ivory is widely considered to have been exported from East and Southern Africa through the Indian Ocean trade routes in pre-colonial times. But a new paper in the African Archaeological Review shows that the earliest and most southerly evidence for pre-colonial ivory trade in Southern Africa has been pegged 200 years earlier than first thought – at three KwaZulu-Natal sites.

According to documentary evidence, ivory trading from the East African coast was well-established by the early first millennium AD. The paper's authors showed that by the 7th century, people in Southern Africa were obtaining ivory from a range of environments, some a considerable distance away, and probably exporting it via Indian Ocean trade routes.

This is approximately 200 years earlier than evidence of ivory trade from the Limpopo River Valley, which has long been known to have been part of a trans-Indian Ocean trade network exporting local products including ivory in exchange for glass beads, glazed ceramics and other luxury goods.

The paper raises the question of how and where trans-oceanic trade to and from Southern Africa first began. The three sites in this study, KwaGandaganda, Ndondondwane and Wosi all date to the 7th to 10th centuries.  All three yielded rich evidence both of ivory and ivory working, contrasting with other sites in the region where ivory has not been found.

The first farmers arrived in KZN CE400, part of a southward expansion from East Africa. They brought with them iron smelting and iron working expertise and were the first societies in South Africa to live in villages.

As their settlements grew and agriculture increased during the Msuluzi phase (7th century AD), they would have come into contact with elephants living in the region's river valleys. Remarkably, the ivory found at KwaGandaganda, Ndondondwane and Wosi did not come just from local elephants, but from much further afield. Carbon, nitrogen and strontium isotope analysis, reflecting the elephants' diets, indicates that the animals lived in a wide range of environments.

Early farming communities must have invested significant energy in obtaining ivory from across the region, suggesting that it was an important commodity at the time. In addition, ivory from the three sites came from different catchment areas, suggesting a well-developed system of ivory procurement from across the landscape that supplied the different processing sites.

If there were such well-organised networks for obtaining and working ivory existed at these sites from the seventh century onwards, was the ivory for the local market, or was it being fed into more widespread distribution networks?

The authors write: “We can't answer this question definitively, but there are a number of lines of evidence that suggest both applied.

“We suggest at least some of the ivory from the KwaZulu-Natal sites may also have been destined for trans-oceanic trade based on the large quantities of ivory on some KwaZulu-Natal sites and the new evidence reported here that ivory procurement was not merely local but was conducted over considerable distances, with a greater degree of organisation than previously suspected. Considering that the first imported glass beads and ceramics appear at almost the same time, there is surely a persuasive case to be made for overseas trade.”

Early farmers in the region also hunted warthogs and hippos, both possible sources of ivory.

First, the team wished to know whether the ivory studied from the sites derived only from elephants, or whether some might have come from warthogs or hippos. Second, they wanted to know if it was procured locally or from further afield.

Here, the application of a new technique called ZooArchaeology by Mass Spectrometry (ZooMS) proved vital. The technique examines peptide sequences in the protein preserved in the ivory, looking for subtle inter-species differences. The tests determined that all the fragments of ivory shaped by humans were in fact elephant ivory – a surprise given that there were hippo remains on all three sites.

Why should elephant ivory have been most prized? In early African societies elephant ivory was imbued with symbolic qualities: as a potent origin symbol, as a marker of royalty, authority, power and procreation.

The authors write: “The widespread distribution of an essentially common elephant symbolism in Africa hints that these beliefs are likely to be of considerable antiquity. If so, ivory may have been valued in Early Iron Age farming communities in KwaZulu-Natal is the same way as in later centuries. Perhaps there is a connection here with the apparent preference for elephant ivory, rather than that from hippopotami or other species, found in this study.”

“Ivory bangles or armlets were the largest, most frequent and standardised type of artefact manufactured from ivory and occur not only in KwaZulu-Natal but also later sites in the Limpopo Valley.”

They believe that much of the ivory working waste, recovered in great quantities at Ndondondwane, Wosi and KwaGandaganda, likely relates to the shaping of these bangles. (See photo below.) 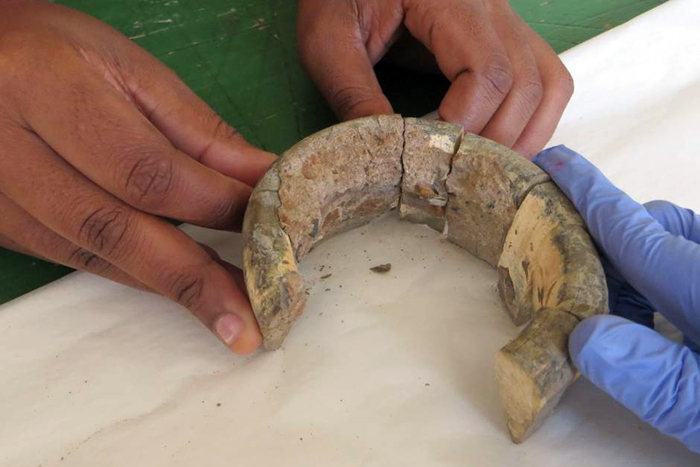 “Production of these appears to be confined to a limited number of settlements where it continued over several hundred years. These sites may have been politically and economically more important than others.

“This point may be relevant to our identification of all the ivory in this study as elephant – the shapes and sizes of hippo and warthog tusks are unsuitable for making bangles like these.”

The researchers say that this suggests early craft specialisation at these sites as no evidence of ivory working exists at other Early Iron Age sites in KwaZulu-Natal and very few, if any, ivory artefacts.

“KwaGandaganda, Wosi and Ndondondwane preserve the earliest evidence for large-scale ivory processing in Southern Africa, the precursor of a larger, more expansive network of goods – including gold – that would flow through this region in the centuries to come.”

The authors speculate that trans-Indian Ocean voyaging may be far more ancient than the first millennium. There is some (much-debated) evidence that bananas had reached Uganda by the fourth millennium BC. A variety of other food crops were dispersed across the Indian Ocean in succeeding millennia, with African domesticates reaching India by at least 2000−1700 BC.

“This commerce relied on suitable winds and ocean currents, and it has long been thought that vessels relying on trade winds to cross the Indian Ocean probably did not make landfall on the African mainland further south than the northern end of the Mozambique Channel; winds and currents in this channel are challenging for sailors even today.”