Favish's strategic plan is a beach

It's an unlucky number for some, but 13 has been a happy allotment of years as head of the Institutional Planning Department says director Judy Favish on the eve of her retirement. It was 13 years ago (give or take a few months) that she moved into her office in Bremner.

Some things haven't changed: her desk faces the same way it did in 2013, and social justice through education remains a leitmotif in her work – her portfolio encompassing institutional information, academic planning, quality assurance, social responsiveness and institutional research.

But much else has changed. Favish and her team have been at the prow as the institution has navigated sea changes in higher education, particularly in the past 18 months as student protests rocked campuses.

It's been a wild ride, she concedes.

Much of her work these past two years has been on the university's new draft strategic plan – a map for the next five years, which has been delayed as a result of recent events in the university sector.

“I'm tired,” she says from her computer where she's finessing the final draft. The document has gone through Senate (the academics) and the PASS Forum (the professional, administrative support and service staff) and will go before Council on 10 December for consideration and approval.

Now, looking forward to retiring on 31 December, she has a strategic plan of her own.

“I want to work on projects related to addressing inequalities in our society, move to the seaside and walk my dog, Randy, on the beach.”

She's known for her wryness and no-nonsense style, although occasionally there's unbridled levity. At the strategic plan feedback session for PASS staff in November, Favish joked about turning the saga into a production.

“But I'm not sure whether it will be a drama or a comedy with singing and dancing.”

At that meeting, where the newly insourced staff were attending the PASS Forum for the first time, Favish summed up the strategic plan more neatly than its long gestation could have suggested: “We want to inspire a strong university that grapples with its challenges.”

Favish is also known as an analytical thinker and a hard grafter. Her early career was steeped in education. A former teacher (educational psychology) at a teacher training college, Favish has an MA in adult and continuing education from the University of Warwick. In 1975 she convened the Western Province Literacy Project, which was established to provide worker education and literacy classes to members of the Western Province Workers Advice Bureau and community organisations.

She's no stranger to student protest either (she was at the coalface at Bremner over the past 18 months). During the 1976 student uprisings, Favish was served with a banning order under the Internal Security Act and confined to the Cape Town magisterial district for five years. Its strictures severely curtailed her educational, political and social activities.

She has worked for the Labour and Community Education Project, part of the South African Committee for Higher Education (Sached) Trust. This resulted in a secondment to COSATU to develop policy recommendations for the country's future education and training system with a particular focus on adult basic education.

In 1993 Favish found herself at the Centre for Education Policy Development, which was established by the ANC to develop education and training policies for an ANC-led government. Three years later she was appointed head of policy and strategic planning in the Reconstruction Development Policy and Planning Directorate in the Gauteng Department of Education (GDE). A promotion to acting director followed in 1997 and another to director of policy and planning for the GDE in 1999. 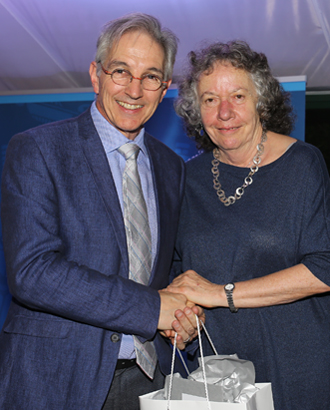 From the start, Favish saw a strong congruence between UCT's aspirations to be a leading university and social responsiveness.

“They were always complementary. UCT could build its reputation and expertise by engaging with a wide range of regional and local issues.”

Her department developed a conceptual framework that foregrounded 'engaged scholarship' as a more acceptable concept, one that's continued to grow in reach.

“Back then there was no monitoring of the nature of our role in society,” said Favish. “I found that quite strange, given the White Paper of 1994 for the transformation of higher education.

Now there are performance criteria for academics, who are measured on how they contribute to advancing public benefit through engagement with society.

“There's now a general acceptance that this work is valid, important and needs to be profiled … I've also come to appreciate the incredible work that's been done in this area across the university.”

She has also published extensively in the area of socially responsive research.

Another challenge was to approach bureaucratic work in developmental ways.

“I think we've been quite successful there, with a shift in academic planning from meeting requirements to looking at how policies can enable people to reflect more consciously on educational practice, such as with curriculum design.”

More recently the team has been able to play a bigger role in advancing strategic initiatives such as advancing interdisciplinarity and curriculum change through the Curriculum Change Working Group.

“This has been very active engaging students and academics about the decolonisation of the curriculum and what that actually means. It's been quite challenging but also very rewarding.”

The past two years have been tough.

“I'd really hoped that we'd be able to come up with a strategic plan with a mandate to address one of the fundamental challenges we face: pervasive inequality. The unrest at the university and beyond has helped the community gain a better perspective and understanding of what's driving some of the struggles and the demands, and that's been good. I think there have been shifts.”

With the strategic plan all but buttoned up, Favish is reflective. Inevitably, there are some loose ends.

“The biggest regret is the revised policy on research and staff development for PASS staff. This has been something I've been passionate about as a senior member of a professional and support department.”

One of her campaigns was to promote lifelong learning to open up more opportunities for adults.

“We did develop a Recognition of Prior Learning policy and we've managed to build some sort of community of practice, and opened up some possibilities across the university in the Continuing Education Policy. But I would like to have been more successful there.”

But the countdown has begun in earnest.

“It's hard to be leaving at this point; where it [the strategic plan] now needs to be rolled out and knowing I'm not going to be part of it.”

Students are very important to her and even during the past months of protest, much of it centred on the Bremner building, Favish consciously tried to connect with them.

“I spent quite a bit of time talking with them and I was inspired by their willingness to read, debate, discuss, their energy and their creativity.”

This has been one of the most moving experiences of the past two years.

“As a bureaucrat one can be quite removed from students, and I like students. I like working with young people. Over the years I've tried to ensure that we have students on all our committees and that makes all students feel at home. So having those insights into what was driving the protests was illuminating.”

Nonetheless, it's time for new energy at the helm of the IPD, she says.

The social responsiveness component, including the Knowledge Co-Op and social responsibility officer, will move to the Research Office. Professor Daya Reddy will be stepping in as acting director of the IPD.