A manifesto for change

Social restitution refers to the everyday actions and attitudes that South Africans can bring into discussions with each other in the hope of making things good, while being unable to make things right.

“What I have tried to do in the book is to invite more and more people into this conversation about our past, its injustice and what we need to be doing to be a different kind of country going forward in the future,” Swartz explains.

The book draws on the testimony of 60 South Africans of all races, ages and classes. It presents tangible ideas that are intended to transform South Africa into another country during our lifetime.

She writes of her work: “These everyday South Africans offered stories about living through South Africa's transition, some personally, others through their parents, and how they see our past and future. They talked about their experiences of the lingering damage of injustice: about Black patience, pain, anger and disbelief; White oblivion, blindness to privilege and shame.”

It is imperative that we understand the depth of our inhumanity to each other, Swartz says, because it has not gone away.

Twenty-two years into our democracy, has the time for discussions of restitution not passed?

The legacies of apartheid are still very much present in South Africa. This makes the discussion of restitution vital, says Swartz, presenting a number of figures to illustrate the starkness of these inequalities.

South Africa, as a whole, sits at number 116 on the Human Development Index list. White South Africans, looked at in isolation, come in at number 15. This is on par with the United Kingdom, Sweden and France, and is ahead of Belgium. 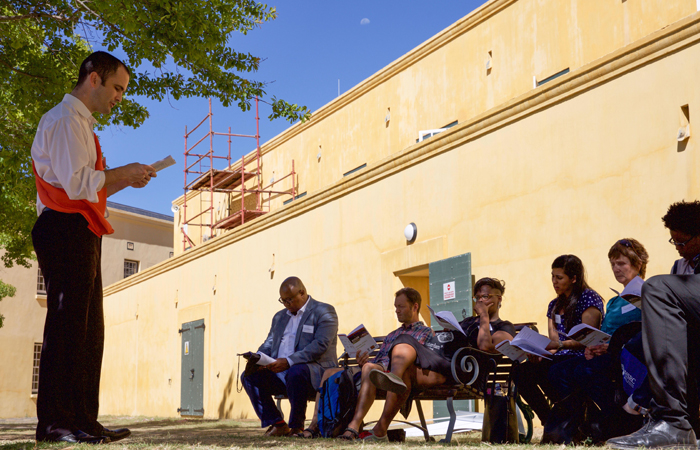 Conference-goers take a pilgrimage around the Castle of Good Hope before discussing the ways in which they can realise restitution in South Africa.

Another Country: Everyday Social Restitution was launched to roughly 400 members of civil society. The launch kicked off the inaugural restitution conference hosted by the Human Sciences Research Council and the Restitution Foundation at the Castle of Good Hope.

Located within this historical and painful site, organisers hoped to remake and reclaim the castle through the collective efforts of conference-goers.

“[W]e are not yet the country that we want to be: a country where race no longer dominates. It does. Where there is equal access to opportunities. There isn't. Where we know people who are different to us and have them as our neighbours. Not yet enough. We are a country in which poverty and inequality remain mired in our national consciousness,” said Swartz in her opening address.

It was with this vision of a reconciled country in mind that Swartz began her engagement with Another Country: Everyday Social Restitution.

With one eye focused forward, imagining what a reconciled South Africa might look like, the other should remain pointed backward.

“We say we have worked for what we have, instead of remembering Bantu education, job reservation and the multiple ways in which land was taken from some and given to others,” she says of white South Africans.

Hoping to hold up a mirror to white South Africans and to encourage them to do something, Swartz aimed to convey her ideas in a way that doesn't merely beat them over the head and elicit their silence.

She appears to have succeeded.

Chauke noted: “This book is the perfect way for whites to stop saying sorry and begin the uncomfortable, yet necessary task of doing sorry.”

“It's a book for every South African,” he continued.

Accessible and sincere, it is presented in a way that allows all of us to understand and engage with it, says Madlingozi.

“What I see happening here is Sharlene herself grappling with these issues. She's not there yet. She's still grappling with it. She doesn't claim that she's seen the light,” he says.

Not only does the book encourage black South Africans to open up about their hurt and their anger, it prompts their white counterparts into action. 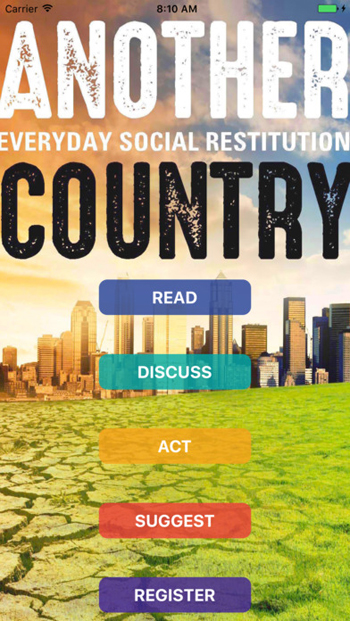 A mobile application was designed to help South Africans take up the challenge issued by Swartz: to have the difficult and necessary conversations on injustice and restitution.

This is a manifesto, he says.

Make restitution part of our everyday

Swartz presents four ideas, which are designed to promote an understanding of, as well as a plan to implement, social restitution.

First is the notion that injustice damages our humanity. This inhumanity does not fade over time and must be grappled with before we can make strides forward.

Second, she notes the need to introduce new language (beyond that of victim and perpetrator, which many fear to embrace or struggle to identify with) to better allow South Africans to locate themselves and, thereby, to talk about their role in past and present injustices. She proposes words such as beneficiary, resister, ostrich, architect and implementer.

Third, restitution must restore the dignity, sense of belonging and memory of all. It must recover access to opportunity. It needs to encompass the realm of the practical, financial and symbolic.

Fourth, she extends the role and responsibility for instituting restitution beyond government bodies to each and every individual. She proposes that decisions are taken collectively and include extensive engagements and dialogues across divides.

Chauke believes that social restitution is a journey, a process rather than a destination. It also needs to be done out of sincerity and not motivated by a bid for social capital, he adds.

“My main issue of concern is that we want to avoid the creation of bad whites versus good whites: those whites that contribute money or resources to the restitution project saying: 'I'm a better white. I'm a good white. Pat me on the back,' versus those that don't,” he says.

“Our current inequalities did not suddenly arise, they have been hundreds of years in the making,” says Swartz.

She hopes that South Africans will accept her challenge and begin the difficult and necessary conversations required to make restitution a reality.

“What I'm hoping that my book will invite you to do, is for us to have the courage to accept this challenge of building another country one small group, one dialogue group at a time.”