Using data from NASA's Fermi Gamma-ray Space Telescope and other facilities, an international team of scientists, including Dr Vanessa McBride and Dr Lee Townsend from UCT's Department of Astronomy, have discovered the first gamma-ray binary in a galaxy other than ours.

Gamma-ray binaries consist of a neutron star or a black hole interacting with a normal star to produce gamma-ray emissions that dominate the radiative output of the system. Only a handful of such systems have previously been discovered, all within our Milky Way Galaxy.

This gamma-ray binary, discovered within the expanding debris of a supernova explosion located in the Large Magellanic Cloud (a small nearby galaxy about 163 000 light-years away from Earth), is the most luminous one ever seen. The dual-star system, dubbed LMC P3, contains a massive star and a crushed stellar core that orbit each other every 10.3 days to produce a cyclic flood of gamma rays, the highest energy form of light.

Two big questions intrigue us about gamma-ray binaries. Firstly, do they harbour neutron stars or black holes? In most cases, we are unable to tell. But optical observations made with the Southern Astrophysical Research (SOAR) telescope in Chile tentatively suggest that a neutron star is responsible for the cyclic behaviour in LMC P3. Secondly, how are these energetic gamma-rays produced? These systems must act like giant particle accelerators to produce such energetic radiation, but the acceleration mechanism is still a question for debate.

“These are very rare stars – less than ten have been detected in our own galaxy and this is the first one discovered outside the Milky Way. We still don't understand how they work.” says Dr Vanessa McBride.

Lead researcher, Dr Robin Corbet from NASA's Goddard Space Flight Center in Maryland, says, “Finding one so luminous and distant is very exciting. Gamma-ray binaries are prized because the gamma-ray output changes significantly during each orbit and sometimes over longer time scales. This variation lets us study many of the emission processes common to other gamma-ray sources in unique detail.” 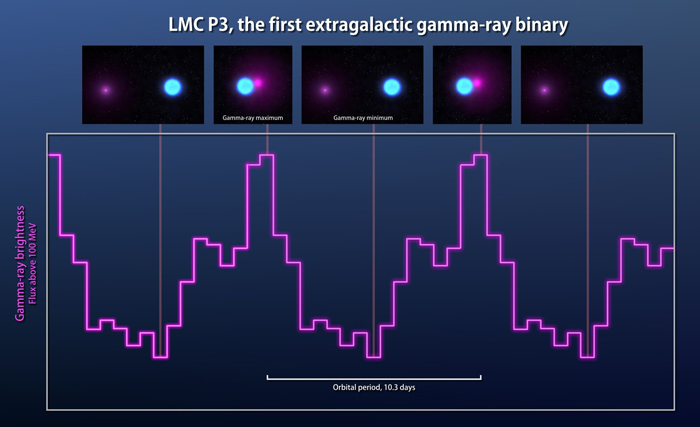 The next steps for the research include confirming the neutron star nature of LMC P3 by making observations to directly detect its rotation period, although this is very difficult. The team of scientists is also interested in tracking the two stars' orbits, to see if they are truly circular or more elliptical. Because there are so few of these systems, and this is the only one outside the Milky Way, any new information will help them learn how these energetic star systems evolved and how they are powered.

The discovery was published on 27 September 2016 in The Astrophysical Journal, Volume 829