But that's exactly what Dr Diego Rubiera-Garcia did when he presented a lecture series on possible modifications to general relativity's explanation of black holes to students and staff at UCT's Department of Mathematics and Applied Mathematics in late October.

In the course, Rubiera-Garcia explained how the structure, nature and properties of black holes could be different from what is currently understood if modifications to the theory of general relativity were introduced.

He starts by explaining the properties of black holes according to general relativity.

What is a black hole?

Black holes were thrust into the public consciousness by Albert Einstein's canonical theory of general relativity in the twentieth century.

They are, essentially, objects with a gravitational pull so strong that nothing, not even light, can escape from them.

“This is why a black hole is so powerful. It's a hole in the sense that everything falls in; nothing can run away. And if no light is emitted, you can see nothing but black.”

The life of a star always hangs in the balance between gravitation pulling inwards, wanting a collapse, and nuclear forces pushing out.

If it achieves a stable state, like our sun, a star shines for billions of years, depending on its starting mass, of course.

“After a given time, gravity always wins this battle, and the star collapses,” says Rubiera-Garcia.

The final fate of the collapsing star depends on how large the mass of the star is, he adds.

If it's big enough, it forms a black hole.

General relativity says that if the mass of a collapsing star is large enough, a horizon is formed, which is nothing but the point at which the escape velocity of matter pushing out of a collapsing star reaches the speed of light. But the matter keeps collapsing inside the horizon. Indeed, it collapses without stopping into a smaller and smaller size until you get to a single point of zero volume in which all the star's matter has collected. That's according to the theory.

“This is something odd,” he says. “How can all the matter of the star be in a single point?”

This single point is what's known as a singularity. It's a crucial pillar that props up general relativity's theory of black holes.

“Now, singularities are very dangerous, because they imply that we cannot predict any longer the fate of this matter that has collapsed. But in science, we always need to predict.”

The breakdown of prediction is bad for our theories of nature, says Rubiera-Garcia.

“General relativity tells us that singularities cannot be avoided. You will always have a singularity no matter what you do. So the theory predicts its own lack of prediction of a singularity”.

“It's some kind of self-destroying theory.” 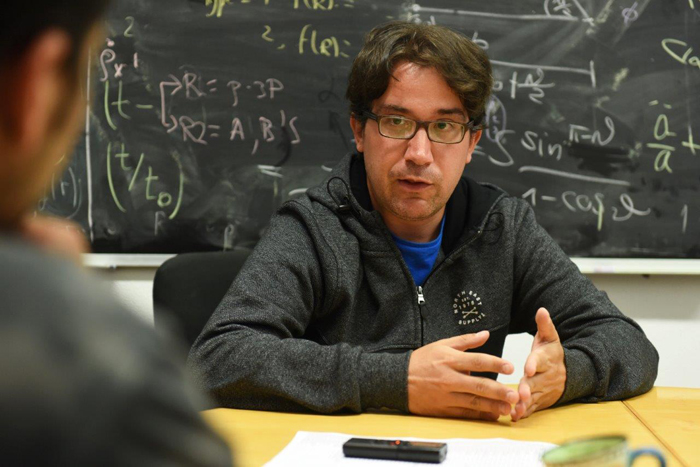 No need for dark matter?

Rubiera-Garcia returns to the idea that general relativity might not be completely correct.

“In the innermost region of the black hole, something odd is happening, and this is telling you that the [theory of the] singularity has to be avoided,” he argues. “It cannot be avoided within general relativity. Maybe with a different theory of gravity we could avoid this issue with singularities.”

Observable matter accounts for less than 5 percent of the mass in the universe. So the theory of general relativity has come to rely on the presumption that dark matter and dark energy exist – even though these forms of matter with unusual properties have never been observed. But Rubiera-Garcia says that we have to use these unproven sources of matter in order to match the general relativity predictions with scientific observations.

“Some people believe that because of the trouble with dark matter and dark energy, we've already come to the point where the [general] theory [of relativity] can no longer explain what we're observing,” says Rubiera-Garcia.

Instead, he is experimenting with theoretical models that would modify general relativity to the point that it no longer assumes the existence of singularities and seemingly undetectable dark matter and dark energy.

“It looks a little risky to say that Einstein could be wrong, but this is science,” he grins. “We have to question ourselves all the time, and there seem to be problems between theory and observed events, so why not explore all possibilities?”

“If your theory avoids the singularity, which is a theoretical problem, maybe it can account for observations without introducing extra components of matter we have not observed yet,” he muses.

“The search for dark matter has been ongoing for decades. We haven't found a single particle of dark matter so far … It gives you a strong motivation that maybe we are adding something in order for the theory to fit the observations, but what is [actually] wrong is the theory.”

Rubiera-Garcia's visit to UCT was funded by Dr Álvaro de la Cruz-Dombriz, lecturer at the UCT Mathematics Department and the UCT Cosmology and Gravity Group, in order to develop common projects.

“It's a really nice programme allowing for high levels of mobility for staff and for students. Earlier this year it funded a similar course given by our very own Dr Álvaro de la Cruz-Dombriz at the Complutense University of Madrid and I will be visiting the same university to teach a course on modified gravity next March,” says Professor Peter Dunsby of UCT's Cosmology and Gravity Group.

“We're discussing me coming back for a longer visit. It will be great to be here.”

UCT will be receiving a visitor with the Erasmus+ programme – Professor Juan Bellido, of the Institute of Theoretical Physics (IFT), Madrid, Spain – and three more with the National Institute of Theoretical Physics (NITheP) programme – Dr Diego Saéz-Gómez and Professor Francisco Lobo, both of Lisbon University, Portugal, and Dr Jose Beltrán Jimenez, University of Marseille, France – at the end of November to deliver graduate courses and develop scientific projects with leading worldwide institutions, says De la Cruz-Dombriz.

The UCT Cosmology and Gravity group is also organising the Beyond Concordance Model II meeting at the end of November, which will bring together around 60 national and international cosmologists.