It's estimated that over 30 000 artisanal fishers work our seas. Theirs is a less precarious existence since the Department of Agriculture, Forestry and Fisheries began rolling out its Small-Scale Fisheries Policy, gazetted in 2012 and enacted through an amendment of the Marine Living Resources Act in 2015.

The department has begun a five-year, highly participatory process with these small-scale fishers, which is focused on community fishing rights, human rights and socio-economic development. The aim is to give small-scale fishers legal recognition through community fishing rights and assist fisher cooperatives with greater empowerment in the value chain.

Technology, in the form of the Abalobi suite of apps, is also playing a vital role in revolutionising small-scale fishing, thanks to a project involving Dr Serge Raemaekers from the Department of Environmental & Geographical Sciences.

Raemaekers was part of the government's National Task Team that drafted the new Small-Scale Fisheries Policy and is part of a transdisciplinary stakeholder group that has pioneered Abalobi. This group also includes the co-developers of Abalobi – community worker Nico Waldeck and fishery manager Abongile Ngqongwa.

In a nutshell, Abalobi is an ICT4Fisheries initiative in the form of connected mobile applications for use by fishers, fisher cooperatives, monitors, managers and ultimately seafood retailers and consumers. It is slowly becoming the official application for all information linked to small-scale fisheries governance in South Africa. 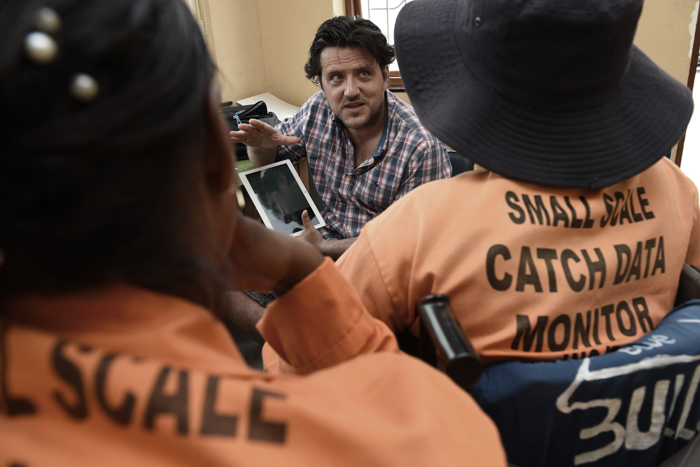 “There is much more we can do to rethink science so that it has a transformational impact” – Dr Serge Raemaekers, one of the drivers of the Abalobi suite of mobile apps for small-scale fisher governance. Photo Michael Hammond.

The aim, says Raemaekers, is to transform the small-scale fisheries sector, whether it's at governance or value-chain level. It's a win-win management system as it can also provide valuable information for the Department of Agriculture, Forestry and Fisheries and a host of marine-resources researchers such as oceanographers, marine biologists, marine lawyers and economists.

With social justice at its heart, Abalobi aims to alleviate poverty in the small-scale fisheries chain while transforming the way knowledge is produced and the stewardship of our marine resources. By harnessing essential marine data, it will also build resilience against climate change. For example, fishers are already sharing insights on fish migratory patterns on the mobile catch recording app, Abalobi Fisher.

“It's a participatory action-research project with a strong community interface,” notes Raemaekers, who has been part of the project from the start. “But the fishers drive the co-design process.”

Fish with a story

The newly released version of the Abalobi Fisher app will allow for the existing fishers to invite new fishers to the group, running the expansion at grassroots level. Another proud development is the prototype of their new Co-Op app, where fishers can pool their catches and sell them on the market, all on a virtual platform. 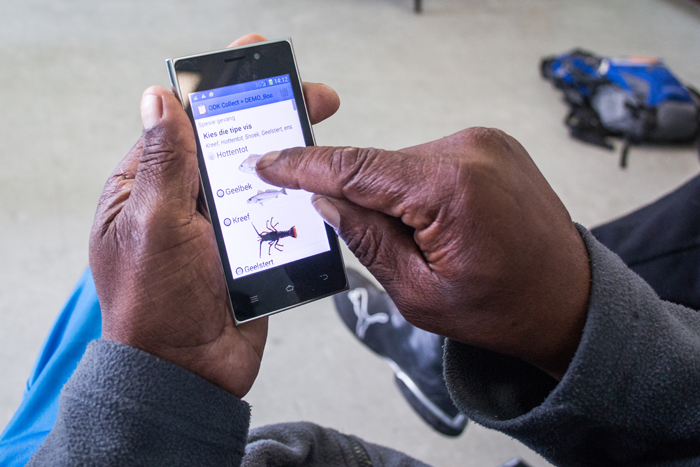 Abalobi prototyped their new Co-Op app, which allows small-scale fishers to pool and sell their catches in a virtual marketplace, cutting out the middlemen. Photo Serge Raemaekers.

It's “fish with a story”, says Raemaekers. The app means that these artisanal fishers can approach markets directly, develop their brand and make themselves visible by cutting out the marketers, or middlemen, and share their story of marine resource stewardship and community development.

“This is the commercial aspect of the project. It allows fishers to develop arms-length relationships with ethical retailers.”

And with a more formalised relationship between fishers and retailers, these artisanal fishers can now negotiate better prices for their fish – and consumers can access a much more diverse 'basket' of fish than is available from current commercial fisheries.

It's also good for the development of an ethical market, add Raemaekers. The Abalobi team surveyed 170 restaurants in Cape Town who were interested in sourcing directly from small-scale fishing communities, and has discussed opportunities with retailers such as Pick n Pay and Woolworths.

“You know you're supporting and eating seafood caught by a traditional fisher who could be using sustainable fishing methods and whose livelihood it is, and whose role plays a big part in the fabric of their community.

The fishers call it “fair fish” or “slow fish”, and the app allows for the connection from “hook to cook”.

Raemaekers and a team of fishers from Lambert's Bay will be testing and refining the new app during the summer lobster season.

The development has also required some careful thinking about facilities at these and similar small fishing harbours. How would fishers handle cold chain storage and interact with potential new markets?

“We held a workshop in Lambertsbaai with fishers and Woolworths to assess needs from both sides, opportunities for fishers to sell 'fair and sustainable fish' on the retailer's shelves and to present and discuss the technical prototypes.”

The project is founded on solid research and allows scientists to harness vital information.

“The value small-scale fishers bring to sustainable fisheries has been underestimated,” says Raemaekers. “They hold the local knowledge of the oceans and marine life that can enrich governance first hand, as well as policy development in the sector. Their insights bring invaluable perspectives of the impact of climate change and our interactions with the ocean.”

He's also keen to ensure that Abalobi becomes an incubator for transdisciplinary research at UCT.

“The best way to do transdisciplinary research is to have a tangible project that's engaged, that changes lives or current ways of doing things and where everybody can have their input, whether it's around marine biology, oceanography, economics, computer science or social sciences.”

Abalobi is about embarking on a transformational process “that helps us think through barriers, navigate them and foster relationships.

“Because if we want to address complex socio-ecological problems, we have to do this together, jointly at theoretical and practical levels.”

The team saw this during the Abalobi development process, where elements of social justice, sustainability and development all started coming together.

“It's been interesting to bring all the disciplines together on a journey that doesn't polarise people but allows them to work through their own questions and foci. I've heard conversations and seen collaborations in this project that I haven't experienced before.”

It's been a transformational personal journey for the Belgian-born scientist too.

A bio-engineer who got into aquaculture, Raemaekers studied in the Philippines and came to South Africa in 2009 to work in marine biology assessment in order to understand fishing and the effects on resources.

“I was working in the former Transkei and had lots of time between good diving days to do my counts and surveys. I started speaking to fishers and got much more interested in their story, especially the mismatch between the then mainstream approaches to fisheries in South Africa and the more customary, local practices.

“I wrote a PhD about that and it resonates very much with what's happening at UCT with decolonising the curriculum and transforming the university. There is much more we can do to rethink science so that it has a transformational impact.”

The next chapter in the Abalobi story will be to scale up these tools and their user base in South Africa, particularly in the Eastern Cape and KwaZulu-Natal.

“Abalobi is a proudly South African tool, but there's lots of interest and applicability outside the country: in the Seychelles, Madagascar, Mozambique and the Lake Victoria region.

“There are so many different fishers and groups.”

[Note: Abalobi's main funders are the Department of Agriculture, Forestry and Fisheries, the National Research Foundation and the Technology Innovation Agency, which is the main funder.]