Xolisile Thusini is a particle physicist whose research focuses on the discovery of the Higgs boson and its properties.

Thusini was born and raised in a small traditional household in Nquthu, KwaZulu-Natal.

She says it was her aunt, a lecturer at the University of Zululand, who prompted her to study further.

“When you're from the rural areas, all you ever know is being a medical doctor, engineer, teacher or nurse. So in Grade 11 I didn't apply for varsity,” says Thusini.

Thusini's aunt saw her excellent academic performance and invited her to see what UZ had to offer.

“I had an interest in engineering, but the only thing they had at UZ that was close to engineering was physics and electronics.”

She decided to grab the opportunity and see what doors it would open for her. After her first year she realised that she performed better in physics than electronics.

“I decided to continue with physics and ever since I've fallen in love with it,” says Thusini.

After completing her degree at UZ she did her honours at Rhodes University, and then joined the African Institute for Mathematical Sciences (AIMS) to study towards a master's degree in mathematical sciences.

“I went there because I knew there was a guaranteed sponsor to further my studies” she says.

Thusini describes the experience as an enlightening one.

“I was a bit tense about my English, but when I got there I met people who had certainly not studied in English but French and Arabic instead. Everyone there was willing to learn, so I was really enthused and motivated,” says Thusini. “That's where I met my supervisor, Dr Andrew Hamilton.”

“From there I came to UCT to do research master's and this is my final year,” says Thusini.

She says, “We're trying to go back when the universe was microseconds old and trying to find out what happened, because we believe all those particles that existed there either decayed or interacted and, as time went on, we ended up with matter and everything we see around us.”

Thusini chose to study particle physics because she developed an interest in understanding matter, their interactions and why we have mass in the universe.

“These discoveries will change the way people think about nature. So I really want to be part of that achievement of discovering something,” says Thusini.

She is currently working with the European Centre for Nuclear Research, where they recently discovered a new particle in the ATLAS experiment.

“That was a big achievement in particle physics. So being part of that achievement is a big thing,” she says.

Thusini is working on her research in collaboration with other scholars from universities in the United States and Europe.

It's been a long journey. 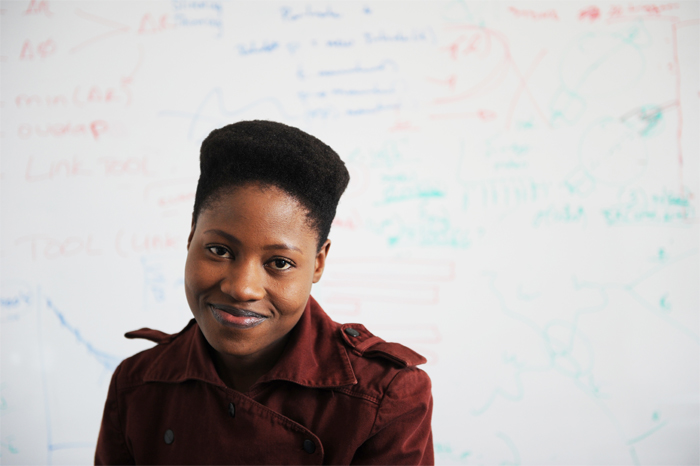 The ATLAS experiment is one of seven particle detector experiments. Thusini conducts her experiments at the Large Hadron Collider, a particle accelerator at the European Organisation for Nuclear Research in Switzerland

Thusini is the first in her family to go to university; her parents are unemployed back home in KZN.

She says attending Rhodes and AIMS was her gateway to finding her way into UCT.

“I won't lie – coming to UCT was my biggest achievement. I remember when I was in high school my biggest dream was to come study medicine at UCT, but that didn't happen,” she says.

She says her motivation comes from her mother's inspiring words when she left to go to university in first year.

“When I needed money for registration, she made great efforts out of the little we had at home to support me,” says Thusini.

Her mother has always longed to study further and become a teacher, but circumstances did not allow her to pursue her dream.

“My mom told me that her whole life she's wanted to continue with education, but circumstances were unfavourable, so she will let me go and make use of every single opportunity that comes my way.”

Thusini says that whenever she feels overwhelmed, she remembers those words from her mother, which keep her going in whatever she does.

She is expecting to graduate in December.

Thusini would like to focus on her research and pursue a career in academia and motivate young women to contribute to science.

“I'd love to do it in Europe because I'd be closer to the laboratories, which is significant because I am an experimental physicist. Travelling to Europe from here is really expensive,” she says.

Dr Hamilton, Thusini's supervisor, encouraged her to apply for the Women in Science Awards (WISA).

She applied for NRF funding last year, but unfortunately didn't make the cut.

“This year I didn't have funding. My supervisor gave me some from his research fund, so my fees are settled, but I need money to travel abroad to do my experiments,” says Thusini.

She applied to WISA with the hopes of winning and using the prize money towards her travels later this year to complete her research.

“I didn't think they would actually pick me,” she says.

Thusini walked away with the Tata Africa Master's Scholarship award at the gala dinner which took place in Johannesburg on 11 August 2016 as part of the Department of Science and Technology's celebration of Women's Month.

“I really need to advance my understanding of physics and advance my skills,” says an ecstatic Thusini. “This also shows that I'm capable of making a difference, so hopefully my story inspires other people out there.”

Professor Alison Lewis, dean of UCT's Faculty of Engineering & the Built Environment, was awarded the Distinguished Woman Scientist – Research and Innovation award for her contribution to research and innovation in the physical and engineering sciences.

Dr Muthoni Masinde, who obtained her PhD from UCT in 2012, received the Distinguished Young Women Researchers – Research and Innovation award for her work on drought forecasting technologies.

Belinda Speed, who is completing her PhD in forensic medicine in the Department of Pathology, received the DST Doctoral Fellowship for her research into the baseline decomposition rates of bodies in the marine environment in the Western Cape.