Finding peace amidst the punches

For all its furious fists and roundhouse kicks, karate is an intensely spiritual endeavour – in fact, it's almost religious, says Rifqah van Schalkwyk, chair of UCT Karate.

The blue belt waxes lyrical about this seeming contradiction in terms. It's an art form rooted in fighting and violence, but when practised properly, it actually cultivates contentment and the discipline to refrain from, well, violence.

Van Schalkwyk explains: “I'm a spiritual person. I'm very focused on how your inner being is focused on your external being, how it portrays you and how it affects those around you.”

All the push-ups, running, stretching and punching help her develop a unique kind of peace.

“Peace is a relative term. When you are at relative peace, then your world, externally, wouldn't be so chaotic. Your friends would be nicer; you'd be more organised; life wouldn't be so 'rushy'. But obviously, sometimes life happens, so you do rush.”

Not only does the martial art aid internal transformation, UCT's oldest martial arts club knuckles down to some serious socially responsive work, too.

Karate won the transformation trophy at last year's UCT Sports Awards, which was Van Schalkwyk's portfolio. They taught self-defence and life skills to learners at The Homestead orphanage in Woodstock.

Life skills, such as?

“Self-discipline, integrity, humility and to respect yourself and those around you. Karate teaches you that,” says Van Schalkwyk. “You bow to the mat because it gives you the opportunity to learn. You bow to your sensei, your opponents, the referee, the judges, as a sign of respect and to say thank you for giving me this opportunity.”

The physical prowess that comes with practicing the martial arts is great for self-defence, but it's almost a metaphor for control.

“Yes, we are fighting. But it's not in the more conventional sense of being violent. It's training yourself so that you can, if you need to, punch somebody in the face, maybe break a nose or something. But ultimately it's to teach yourself control.

“Your body has the ability to hit something, to defend itself, but at the same time, it has the control not to do too much damage.”

“Peace is a relative term,” she repeats. “You're causing chaos, but at the same time, peace.” 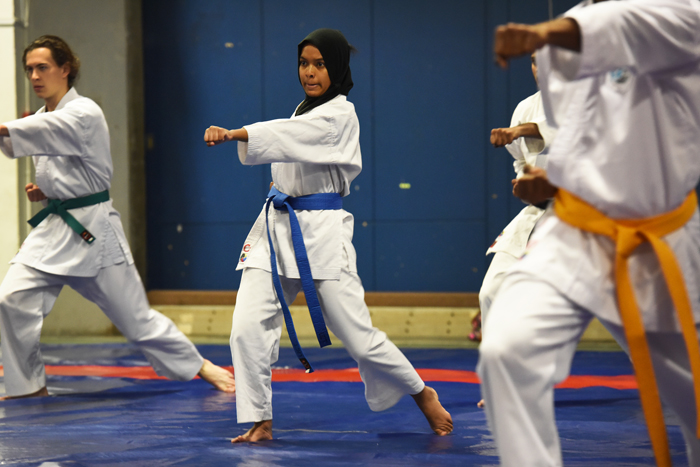 Rifqah van Schalkwyk, in the black scarf, says that karate is more than kicks and punches. It's about self-discipline, integrity, humility and respect.

“You're hitting or blocking hard enough for that person to not come back to you. That is what karate is about. Control.”

It's beautiful, says Van Schalkwyk. It's a way of life.

“You're treating your friend or opponent in the outside world with the same respect you would treat them here.”

At karate's core is a simple ethos that Van Schalkwyk describes in one line.

“Treat somebody the way you want to be treated.”

Van Schalkwyk knows a little something about religion as she's halfway through an honours degree in religious studies. This is her fourth year at UCT and she's been with the karate club since day one.

As this year's chair, she is keen for the karateka to fight in more tournaments (and they are keen, too), but travelling is expensive and many tournaments are uncomfortably close to test and exam weeks. Still, UCT's fighters do well in the tournaments that they do enter. They won five bronze medals at this year's University Sports South Africa championships in Durban, for instance – all for kumite (combat).

Not quite a dojo

UCT's karate club is technically a sports club instead of a traditional dojo. A dojo would teach just one style, but because so many UCT students come from different karate backgrounds, the club must cater for all styles.

They grade according to Shotokan principles, but students from Goju, Kyokushin – you name it – all train here. The resulting cross-pollination of skills helps the students get better, says Van Schalkwyk.

They're not afraid of a bit of self-deprecating fun, either.

“[When we practice], we hit hard but softly at the same time because we don't want to hurt our friends. But we're also tough here,” says Van Schalkwyk. “We act tough. 'Kick harder. I can handle it.' And then someone's nose starts bleeding.

But it's not violent, right?

“No, it's not violent,” she laughs. “It's play. We're very playful. We take it seriously, but sometimes it's just playful. If someone gets hit and it hurts, we laugh, and they end up laughing at themselves.”

It probably helps that a good number of the karateka study at UCT's medical school.