Did a rotating 'broom' or gas ejection cause the Milky Way's giant void?

Astronomers speculate that a rotating, bar-shaped structure that swept through the central regions of our galaxy long ago may be the reason that no young stars have been born there for hundreds of millions of years. Another possibility is that a massive ejection of high-velocity gas, connected to the black hole at the centre of our galaxy, swept the inner regions free of gas so that for a long time there has been no material there to form new stars.

These are just two possibilities for the giant desert free of young stars that extends 8 000 light years outwards from the centre of our galaxy, the Milky Way, says Honorary Professor Michael Feast. But we can't know for sure, adds UCT's 89-year-old, A-rated scholar.

Feast is part of a collaborative team of South African, Japanese and Italian astronomers who made the tantalising find, which was published in the most recent Monthly Notices of the Royal Astronomical Society.

Titled “A lack of classical Cepheids in the inner part of the Galactic disc”, the paper is another milestone in Feast's 68-year-long career in astronomy. But the finding is not what astronomers expected. Professor Noriyuki Matsunaga (University of Tokyo), who led the international team, believes the finding challenges our understanding of the galaxy.

The role of Cepheid stars

The Milky Way, which appears as a bright band across the night sky, is a disc-shaped home to billions of stars as well as gas. Our Sun lies in its outer parts, some 26 000 light years from its centre. A knowledge of the distribution of these stars is crucial to understanding how our own galaxy was formed and evolved.

Measuring vast distances between stars is difficult, but Cepheid stars are ideal candidates to do this, says Feast. Between 10 and 300 million years old, these pulsating stars are much younger than the Sun (at 4.6 billion years) and two to ten times bigger. 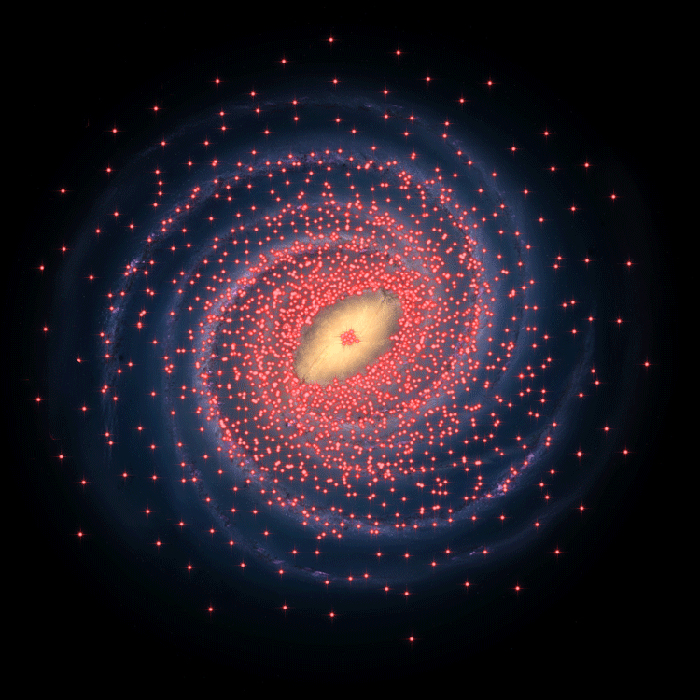 An artist's impression of the implied distribution of young stars, represented here by Cepheid stars shown as red points plotted on the background of a drawing of the Milky Way. With the exception of a small clump in the galactic centre, the central 8 000 light years appear to have very few Cepheids, and hence very few young stars.

Pulsation changes the radius and brightness of Cepheid stars. Their pulsation periods depend on their intrinsic luminosity, which allows astronomers to determine their distance accurately when they measure their periods and their brightness in the sky. The periods range from a few days to about 100 days and their brightness from about 50 to 50 000 times that of the Sun. So they can be seen from very great distances.

Feast says that the present work is part of a larger collaborative effort by the group to study the structure and evolution of the Milky Way disc using Cepheid variables. A few years ago they found that there were Cepheids in a flared outer disk of our galaxy.

“Somewhat earlier still, we found, together with Italian collaborators, that there were a few such stars in the very heart of our galaxy. In our present work we looked for Cepheids in the broad region around the centre. What we found was that, apart from the few found earlier in the galactic heart, the others were either close to us or very far away.

“This was a surprise because it had been assumed in the past that there would be many Cepheids in this region, known as the Extreme Inner Disc, and indeed it had very recently been claimed that such stars had been found,” Feast noted. “Our work does not confirm this claim.”

Their conclusions are, however, consistent with observations by radio astronomers which show that no stars are currently being formed in this region. 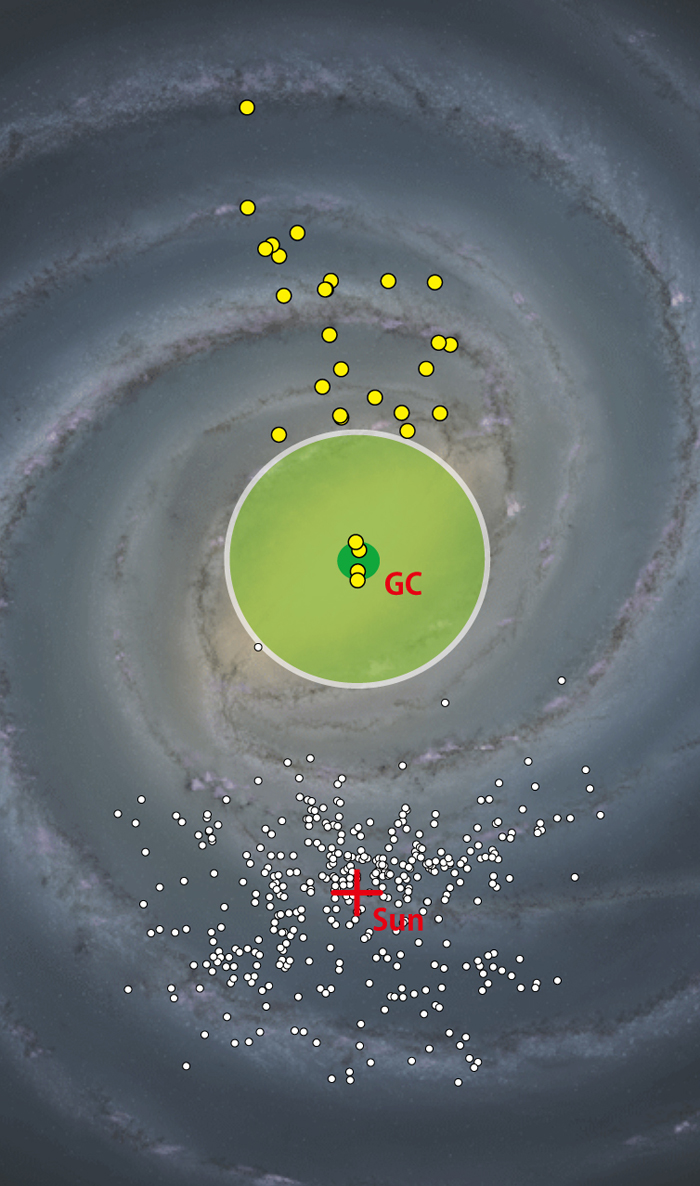 An artist's illustration of the Milky Way with the locations of the newly discovered Cepheid stars marked by the yellow points. The previously known objects, which are located around the Sun (marked by a red cross), are indicated by small white dots. The central green circle around the core of the galaxy marks the location of the 'Cepheid desert'.

What created the desert?

The reason for this desert is not known, but there are some possible explanations, says the UCT astronomer.

“One is that a massive ejection of high-velocity gas connected with the black hole at the galactic centre swept the inner region of the galactic disc free of gas so that for a long period of time there has been no material there from which to form stars. Another possibility is that a rotating bar-shaped structure which is known to exist in the central region of the galaxy swept through this region, clearing it of stars. A very recent paper suggests that such a process may perhaps be going on in other galaxies.”

This work is part of a long-time collaboration between the Japanese and South African astronomers. The partnership goes back to the construction 15 years ago of the joint Japanese–South African 1.4m Infrared Survey Facility (IRSF) telescope at the South African Astronomical Observatory site at Sutherland.

“A major theme of the work of our particular group has been the study of the composition, structure and evolution of our Milky Way galaxy and other nearby galaxies,” said Feast. “But there's still much to do before we properly understand how galaxies form and evolve.”

Much of their collaborative work has used the IRSF, but the team has also made observations for their projects with other telescopes, including the 10m class South African Large Telescope (SALT).

“The [latest] work of our group is one example of Japanese–South African collaboration and how fruitful this has been. It also makes clear that facilities such as the IRSF and SALT make it possible for South African astronomers to tackle major problems in astronomy.”