Senior Research Scholar George Ellis will receive honorary doctorates from Wits on 5 July (honouring his work in cosmology and physics), and the University of Pierre and Marie Curie, attached to the Sorbonne, on 11 October (for his work in general relativity and cosmology). He already has honorary doctorates from UCT (2009), London University, Queen Mary College (2000), the former University of Natal (1998) and Haverford College in the US (1996).

Ellis is one of the world's top relativistic cosmologists, a group which includes Malcolm MacCallum, a former student, and Stephen Hawking, with whom Ellis wrote his first book while working at Cambridge in 1973. The Large Scale Structure of Space-Time debuted at a strategic moment in the development of Albert Einstein's theory of general relativity. Described by the journal Science as “a masterpiece written by sure hands”, it is still regarded as a classic.

Ellis has held positions at the University of Texas, the Enrico Fermi Institute in Chicago, the University of Alberta, and the International School for Advanced Studies (SISSA) in Trieste – the latter was precipitated by a period of particular bleakness in South Africa in 1986. Pro-government witdoeke (white cloths) had caused chaos in Crossroads and KTC, black townships where his wife, Mary, worked as a doctor. He had all but given up hope and went overseas for a while – but then came back.

Though Ellis retired from UCT in 2005, he continues his work in the Department of Mathematics and Applied Mathematics as emeritus distinguished professor of complex systems. The department has been his home since his return from Cambridge in 1974 to foster social change in the country of his birth.

Back in South Africa, Ellis joined the Religious Society of Friends (Quakers) and became involved with the work of the Quaker Service Fund, the Quaker Peace Centre and the Institute of Race Relations – “projects on the ground that were very helpful in grounding me in reality”.

Poverty and unemployment have always been thorns in his side. His social writings in the late 1970s and 1980s raised the ire of the apartheid government. In 1977 he and three colleagues wrote The Squatter Problem in the Western Cape and two years later Low Income Housing Policy in South Africa. Embracing areas such as low-income housing was a direct result of work by the applied mathematics department he headed. Low-income housing was a crisis (“It still is”) and Ellis designed a programme to quantify the massive and complex logistics around it. To learn about computers, he did a BCom honours in business data processing, part-time (and got the class medal).

When he won the 34th Templeton Prize for Progress Toward Research or Discoveries About Spiritual Realities in 2004 for his “bold and innovative contributions to the dialogue between science and religion”, he could have put the prize money away (there was a huge purse attached) and retired. Instead, he invested a portion to underpin his research post-retirement from 2005 and gave the rest to important causes. One was the Basic Income Grant campaign to assist the country's poorest and mitigate the effects of joblessness. 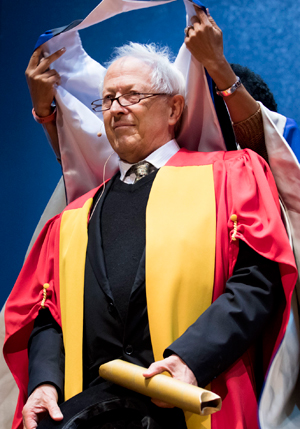 Emeritus Prof George Ellis receiving his honorary doctorate from Wits on 5 July in recognition of his work in cosmology and physics.

The physical and moral universe

The prize recognised his work at the interface of science and religion, and the boundaries and philosophical arguments that underpin them. This has provided the impetus for his burgeoning research into the evolution of complexity and complex systems in the universe, particularly life and the brain.

In writing on the philosophy of cosmology, Ellis speaks of cosmology with a 'c' and a 'C'. The former is concerned with the matter and its motion – determined by physics – that defines the evolution and physical nature of the universe. It is shaped by wonderful observations from the new range of telescopes exploring the nature of the cosmos at all wavelengths. The latter is bound up in with metaphysics and, ultimately, humanity.

“These do, however, shape what happens on the ground.”

A powerful example is found in South Africa's peaceful transition to democracy in 1994 and the subsequent work of the Truth and Reconciliation Commission. It can be seen as based in kenosis, a Greek word describing the “self-sacrificial love that balances self-interest with the interests of others” and “confounding the calculus of rationality,” said Ellis.

Astrophysicist with the Vatican Observatory Research Group, Reverend Dr William Stoeger, who nominated him for the Templeton Prize, said that Ellis's work had shown that “the universe seems to be particularly suited for fostering that attitude and practice and to require it for harmonious functioning at every level.”

Ellis had explored this in his 1996 book, On the Moral Nature of the Universe: Theology, Cosmology and Ethics, with philosopher Nancey Murphy, suggesting the possibility that kenotic behaviour is deeply embedded in the universe and the only way to achieve what might be “rationally impossible” in a world torn by war and insecurity.

Much of the past 15 years has been devoted to researching top-down causation or control and how it affects the human mind and its agency in the real world. A key issue is that in the web of causation, the effects of physics are only part of reality.

In 2009 Ellis co-authored Downward Causation and the Neurobiology of Free Will (2009) with Murphy and Timothy O'Connor. Here are the new frontiers of knowledge, he says.

“Complexity is almost unbounded: biology, microbiology and the brain will give us work for many centuries more, and what we may find may be very unexpected.”

Ellis has just completed a large book on complexity and the way the brain works.
How Can Physics Underlie the Mind? Top-down causation in the human context is published by Springer. He is currently working on another book on the brain with colleague and neuroscientist Professor Mark Solms.

“It's about a very old but current topic: which aspects of the brain are innate, and which aspects are determined by the environment.”

He emphasises that caution is needed when crisscrossing disciplinary borders in this way.

“You've got to be careful that you don't make a fool of yourself … I've always had a co-author who's an expert in the field to prevent this.”

But back to cosmology with a 'c'.

The honorary doctorates that will be conferred in July and October point to Ellis's important work in physics and cosmology. Included are contributions to science policy and infrastructure issues. He was on the South African Astronomical Observatory board and the National Research Foundation committee that proposed the South African Large Telescope (SALT) be built. SALT and MeerKAT (the Square Kilometre Array precursor) are providing an explosion of data from deep space, allowing us to fill in physical detail about our universe.

Would he rather have been starting his career now?

“No. I was very lucky to have been at Cambridge at the time I was. There was an incredible flourishing or renaissance of general relativity at that time. I was a central part of that work from 1962 to 1975. It would have been a great shame to have missed out on that. But I'm very glad I came back to South Africa and had this much broader experience.”

Later this year Ellis will travel to University of Canterbury in New Zealand as a Visiting Erskine Fellow. He also has a visiting professorship in physics at Oxford University and numerous academic links around the world.

A second wind is rare among senior scholars.