Examining the habits of cookie-cutter sharks – which sink their teeth into whales and other large marine animals, making crater-like wounds – has provided fascinating insights into the migration patterns of some of the world's largest mammals.

The so-called 'demon whale-biters' prey on whales off South Africa's West Coast, biting chunks out of their flesh as they prowl offshore tropical waters as deep as 4 000 metres.

This somewhat bizarre phenomenon has been a subject of intense interest for Dr Theoni Photopoulou of the Centre for Statistics in Ecology, Environment and Conservation (SEEC) in the Department of Statistical Sciences.

Judging by the number of bite marks on each whale, Photopoulou's research (recently published in PLOS ONE), could infer which whales have spent more time in the area, thus receiving more bites from the cookie-cutter sharks. This in turn provides a broader picture of the migration patterns of whales. In particular, the unusual bite marks have helped to unravel the mystery of the movements of mature and maturing sperm whales.

A scoop of blubber found in the stomach of a sperm whale at Donkergat whaling station in 1963.

For Photopoulou, unlocking the mystery began in 2014, when she was approached by the late Professor Peter Best, South Africa's leading whale and dolphin scientist.

He wanted help with the statistical analysis of the historical data he had personally collected from 1 700 whales that had been landed at the Donkergat whaling station in Saldanha Bay between March and October 1963. Best's data focused on the carcasses of sei, fin and offshore Bryde's and sperm whales, comprising a unique data set.

“Peter, who was working as a scientific officer in the whaling industry in the 1960s, was curious about the bite marks he was seeing on whale carcasses arriving at the whaling station,” says Photopoulou. “Commercial whaling was still in operation in those days, so he would have seen things that scientists are unable to observe today.”

For her part, Photopoulou – who started out in science as a marine biologist – says she wanted to study the trends of the bite marks, and what they might tell us “about both the bitten and the biting”.

The research found that the cookie-cutters sharks – oceanic sharks belonging to the genus Isistius – clearly prefer deeper water. Whales taken in waters over 3 000 metres in depth had a significantly higher number of bites per whale than those bitten in shallower water.

One hapless whale had over 138 unhealed bite marks, from head to tail. 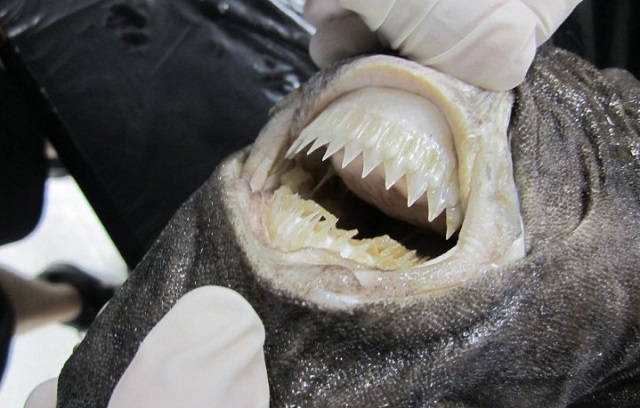 The name 'cookie-cutter shark' refers to its feeding habit of gouging round plugs, as if cut out with a cookie cutter, out of larger animals.

While the results of the study confirmed some of what we know about whale migration patterns, it also provided some new leads. “We know that adult female sperm whales congregate in the tropics each year, to give birth and mate with adult males. We also know that adult males spend time at high latitudes; but we don't have a good understanding of where maturing males spend their time. This study showed that medium-sized males – whales that are not yet fully mature – have fewer bite marks on them from cookie-cutter sharks. This suggests they spend less time than mature males in an area where they are likely to be bitten by cookie-cutters,” says Photopoulou.

The little-known lives of the world's largest whales

“We still know comparatively little about open ocean ecosystem predator-prey interactions, species distributions and ranging patterns,” says Photopoulou. “This study offers an insight into the little-known lives of some of the world's largest whales – and a small, slightly mysterious oceanic shark.”

The bites inflicted by the sharks, while probably bothersome, are unlikely to be excessively painful; and not life-threatening, “as far as we can tell”, she says. “The plug of flesh removed during an attack does not penetrate the blubber layer. It does not reach the muscle beneath the blubber, and is considered a surface wound.” The bites are clean, with smooth edges and an even outline, giving the impression of a cookie cutter.

It may seem very cheeky for a cookie-cutter shark, at less than half a metre long, to prey on a massive whale, but it's simply a way of putting food on the undersea table.

“They don't only attack whales, but also large fish, seals and other sharks, to 'make a living',” says Photopoulou. 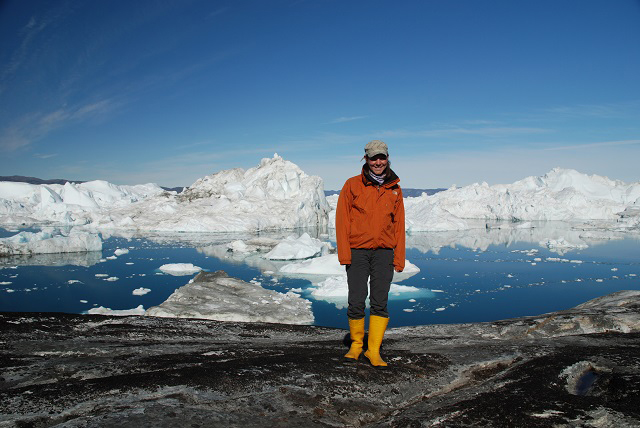 Theoni Photopoulou on a field trip near Disko Bay, Greenland. The aim of the trip was to attach satellite tags to ringed seals, part of a project that was studying the oceanographic processes taking place under the Illulsiat glacier.

It's the vast ocean that interests Photopoulou, whose passion has taken her from Greenland to South Georgia Island, studying marine mammals.

“I have been interested in the ocean since I was a child. Initially I was drawn by the beauty of the underwater world I saw in documentaries on TV; but its long-standing pull is its vastness, how central its health is to the functioning of our planet, and the fact that it is truly a frontier that we have a lot to learn about.”

Photopoulou, who earned a PhD at the University of St Andrews in Scotland, is also excited about the work of UCT's relatively new research group, the Centre for Statistics in Ecology, the Environment and Conservation, or SEEC. It was established in 2014 by Associate Professor Res Altwegg and eight colleagues in statistical, biological and actuarial sciences. The purpose of SEEC research is to develop methods and expertise to link data analysis and modelling to the conservation planning and management process.

Statistical ecology is a young but dynamic field, and Photopoulou sees the research group as vital.

“It has long been needed in South Africa, particularly as this is one of 17 top mega-diversity countries globally, which together hold two-thirds of the planet's biodiversity.

“It is more timely than ever in an era when we are losing species we never even knew existed, and are disrupting natural systems that we don't yet fully understand. In order to protect, manage and conserve the ocean, we first need to understand it; and the field of statistical ecology is at that front line.”

Altwegg describes statistical ecologists as 'ecological detectives' who have to make sense of very complex systems, often with patchy data sets and lots of uncertainty.

The role of statistical ecologists also cascades down to all of us.

“Most people care about the environment, while many depend on it directly for their livelihoods. People worry about the changes that are taking place. Are the weather patterns changing? Is this drought caused by climate change? What will happen to the rhinos if we stop poaching? Answers to these types of questions require data, and complex statistical analyses,” says Altwegg.

Photopoulou emphasises that we can't protect what we don't understand, or don't know about. The more knowledge that is made available, the more people will be enlightened, and this can only be good for the planet.

“One of the best ways to engage the public in scientific research is by capturing their imaginations. Curiosity leads to a sense of wonder, and with wonder comes caring and ownership. We need to show people what wonders the ocean holds, in order for them to care about it and be motivated to conserve it.”