UCT has made a significant contribution to building skills in the public sector with its historic first class of postgraduate diploma in Public Sector Accounting (PGPSA) graduates. The programme is a response to the urgent need in South Africa for competent and accountable public sector financial managers to improve public sector management and reporting.

Programme convenor, Professor Ilse Lubbe, says: “The College of Accounting began offering the new postgraduate diploma in Public Sector Accounting programme for the first time in 2015. The college developed the qualification in response to critical skills shortages in the public sector, specifically in the areas of financial management, audit and governance, and financial reporting. This is the first accounting programme specialising in the public sector at this level to be offered in South Africa.”

The class had a pass rate of 90%, which is noteworthy, as eight of these students were studying while being employed full-time in public sector entities such as the Western Cape Provincial Treasury and other government departments. 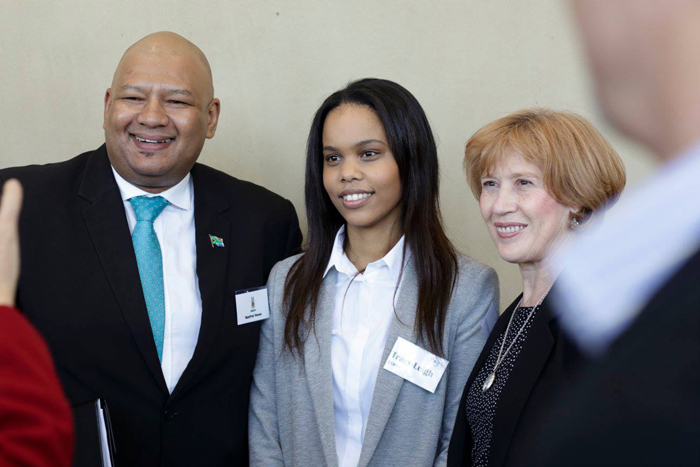 The prize of R10 000 for the top PGPSA student, awarded by the Southern African Institute of Government Auditors, was won by Tracy-Leigh Lyner.

Lyner's interest in the course was sparked in 2014 when Professor Lubbe introduced it to their undergraduate class.

“The knowledge I have gained from this programme has not only educated me more about the public sector, but it has motivated me even more to be an active citizen and contribute towards the economic growth and development of this country,” she says.

Lyner is also part of the first group of trainee accountants in the Western Cape Treasury's Chartered Accountant Academy and is currently completing her articles.

Other graduates also had high praise for the course.

Kabelo Mafiri said, “I am the firstborn of my parents, and the first in the family to obtain a degree. I am from Limpopo, Polokwane. When I heard of this postgraduate programme, which offered me the opportunity to directly contribute to the growth of my country using the skills and knowledge which I learned, I grabbed onto the opportunity with both hands.”

“The employed students managed to get bursaries from their employers, but we would like to establish a funding or bursary programme for the full-time unemployed students,” says Lubbe.

The course has received interest and support from stakeholders in the public sector and Professor Lubbe believes that close relationships with government institutions and industry bodies are key to ensuring that the curriculum remains current and relevant.