Student protest then and now

Introducing the speaker at the Faculty of Commerce's Monday graduation, Deputy Vice-Chancellor Professor Anwar Mall said the “fire” of Debbie Budlender's political activism hadn't been doused yet, and working with her on council had been an enriching experience for himself and others.

Budlender, who also serves as UCT Council's deputy chair, studied at UCT during the 1970s. She was a classmate of former deputy vice-chancellor Crain Soudien and once taught literacy alongside former finance minister Trevor Manuel. She is also well known for her service in the trade union movement and as a researcher into economics and poverty.

In her address, she urged the 375 commerce graduates to use their financial skills to “tell the story” of what was happening in business, government and society in South Africa today.

Budlender said that she had agreed to speak somewhat reluctantly because she had been asked to focus on June 16 and was hesitant to fall back on the “when-we” remniscences of a former activist.

Nevertheless, what the 1976 uprising and the more recent student protests of 2015 and 2016 had in common was that the youth felt their elders had failed them. “This was also one of the strong messages I heard from the youth … who participated in protests at this university and other universities.”

She said as “an older person and a white older person”, what she had taken away from these protests was that it was time “to listen more than to speak”.

It was also a time for the older generation to thank younger people who had brought new energy to addressing the serious problems of society.

Budlender said there were obvious similarities between the protests of 1976 and more contemporary times in that they were led by students and had been preceded by worker protests against low wages.

Citing Marikana, she said that soon after the massacre a Lonmin spokesperson had attempted to distance the company from the employment practices of subcontractors.

This “arm's length” relationship with a real boss is what had created problems for the Marikana workers. She noted that fortunately UCT would be insourcing workers within the next few weeks.

However, she added that this pointed to a more contemporary problem of the world of work where graduates could no longer be confident of finding permanent employment or enjoying the full protection of labour laws.

Recent protests reflected what was happening globally and it was not by chance that the protests of students in South Africa found “echoes in other countries.” 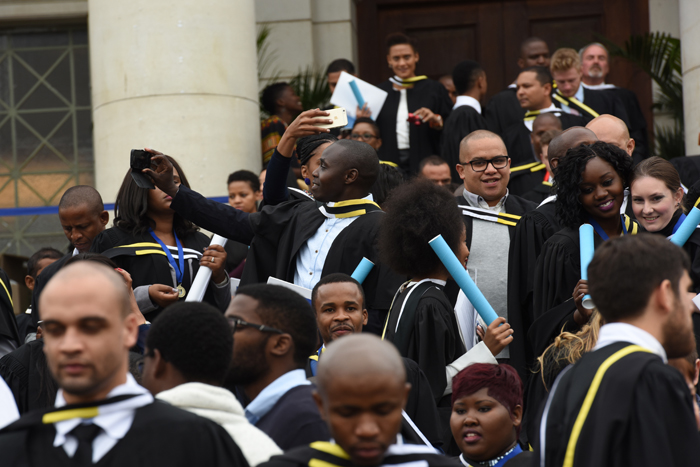 Commerce graduates celebrate on the steps of Jameson Hall.

The good news, however, was that those who were graduating from UCT were doing so with degrees and diplomas that gave them “very valuable skills and knowledge” that were desperately needed to sort out the problems of society.

She said her years of experience had taught her that financial statements could tell you many things but also could hide many things if you did not know the right questions to ask.

The budget was paramount, she argued, as without a proper budget in place, no law or policy could work properly.

“To go back to my earlier observation about my role as an older person, I will be listening and watching to hear and see what you say and do, using your special skills and knowledge to try to address the problems we face in South Africa and the world.”

"You remind me of your late father, I'm proud of you!, he would be too" - A mother's words to her son #UCTGrad2016 pic.twitter.com/xYjRDwLk00