Young and old gathered in Jameson Hall on Saturday, 4 June to mark the 50th anniversary of Robert F Kennedy's 'Ripple of Hope' speech at an event that highlighted South Africa's ongoing struggle for social justice.

It was an afternoon of celebration, reflection and youthful protest as guests gathered in Jameson Hall at UCT to mark the 50th anniversary of Robert F Kennedy's 'Ripple of Hope' speech.

Images of the then New York US senator, taken during his historic visit to South Africa in June 1966, were projected on large screens at the front of the hall as excerpts from his famous speech were broadcast.

The gathering also stood for a minute's silence to acknowledge the passing of boxing legend Muhammad Ali.

Six student protesters picketed in front of the main podium and one of them was given an opportunity to speak before the keynote address by Kennedy's daughter‚ Kerry.

A common theme throughout the event was that, while the civil liberties that were absent back in 1966 were now enshrined in the South African constitution, the struggle for economic and social equality was far from over. 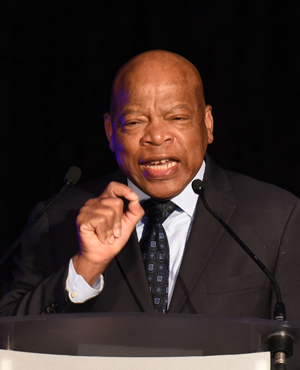 Among the luminaries to speak were Patrick Gaspard, US ambassador to South Africa; Mpho Tutu van Furth, daughter of archibshop emeritus Desmond Tutu; political scientist Keith Gottschalk; student activist Lovelyn Nwadeyi; and US congressman John Lewis, who was one of the “Big Six” leaders of the Civil Rights Movement in the United States in the 1960s.

Also present was UCT chancellor Mrs Graça Machel, who, in her opening remarks, reminded the audience that in spite of its challenges, South Africa was a better place to live in today than it had been in 1966.

She also noted that UCT had given birth to the #RhodesMustFall movement, which in turn had led to the national student movement under the banner of #FeesMustFall. She said that these student movements had served “to remind our consciousness that transformation is not taking place at a pace which meets the expectations of our young people” and that “our freedom is empty” if it does not lead to social justice.

In his speech, Lewis shared his personal memories of the man he called “Bobby”, including the moment when, together, they heard the news that Martin Luther King had been assassinated.

“Never give up, never get lost in a sea of despair, never become bitter, never hate because hate is too much of a burden to bear,” he urged in his conclusion. 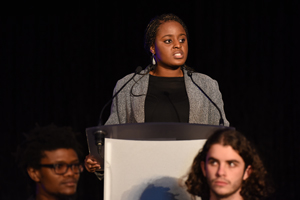 Lovelyn Nwadeyi, who has been active in the student movement, gave a rousing speech in defence of student activism.

Student activist Nwadeyi focused on the nature of the student movement today, and why the younger generation felt the need to challenge the assumptions of the past.

“As young people, we do not claim to have all the answers, but we are in the business of finding these answers and interrogating them to the nth dimension until our consciences will allow us to remain silent,” she said.

In her keynote address, Kerry Kennedy, daughter of RFK and the president of Robert F Kennedy Human Rights, shared both personal anecdotes about her father's visit to South Africa and her view of the challenges facing South Africa.

“More than anything, Daddy wanted to meet the great Chief Albert Luthuli, the advocate for non-violent resistance, president of the ANC and winner of the Nobel Peace Prize, who had been banned and forced into exile outside Durban,” she said.

“At the time, rumours were rife that South African security forces had just a few years earlier shot down the helicopter carrying UN Secretary General Dag Hammarskjöld, killing the world leader. Undeterred, my parents arranged to take an undisclosed helicopter trip to Groutville to meet with Chief Luthuli.

“When my parents flew into Cape Town, Daddy asked the pilot to fly low over Robben Island and tip their wings for Nelson Mandela and the Rivonia prisoners below. The pilot had his license revoked,” she said.

Kennedy emphasised that her father had come to South Africa to “listen and to learn”.

His time here had informed his understanding of racial and economic justice and his belief in the power of youth, “not as a time of life but as a state of mind, as he called it”.

She said that no country had done more to show the world how to address entrenched, legalised hatred than South Africa. However, today, 22 years after apartheid was dismantled, “the economic oppression of one of the most cruel systems of mass disempowerment” continued. 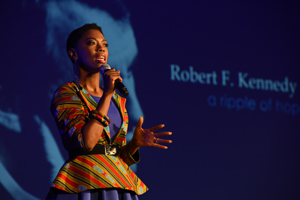 Singer Lira closed off the afternoon with a lively performance.

“And you have that most rare of institutions – an independent judiciary – so you know your courts will hold perpetrators responsible, and that no man, or his swimming pool, is above the law,” she added.

While overcoming economic oppression was not easy, she said that she remained optimistic about South Africa's future.

“As you leave here today, hold fast to your courage and your commitment. And know that we are with you, by your side – sisters and brothers striving for freedom and justice and compassion.”

To round off the afternoon, singer Lira put in a rousing performance that had guests dancing in the aisles.