Inflammatory proteins offer insights into how TB spreads in the lungs

Tuberculosis – the bacterial lung disease – remains a leading global health problem more than a century after it was first discovered. It is still responsible for about 1.5 million deaths every year. The problem is aggravated by drug resistance and HIV/AIDS co-infection.

According to the World Health Organisation, one-third of the world's population is latently infected with the bacteria that cause TB. Only between 5% and 10% of these people develop the active TB disease in their lifetime.

The rest of the latently infected population will never develop the active disease. This is because they're protected by a strong immune system that helps the body to defend itself against the infection.

Scientists still do not fully understand why people with latent TB develop active TB. Ongoing research has centred on understanding the state of the immune system and what goes wrong that results in the TB worsening.

Our research looked at one component of the immune system and found that there were proteins in the body that promote lung inflammation which helps the bacteria that causes TB to spread throughout the lung.

Now that we have identified these proteins that are associated with disease progression, the next step is to find the drugs that will inhibit these proteins and limit lung inflammation.

Although most TB drugs have been focused on tackling the bacteria, these new drugs are likely to help, along with currently available treatments, shorten the treatment course.

Although granulomas are formed to contain the bacteria, their deterioration may result in lung tissue destruction and worsening of the disease.

The detailed mechanisms behind granuloma formation and dissociation during disease progression are still poorly understood. Our study tried to understand why the granulomas deteriorate.

We looked at the proteins and lipids present in various regions of the granuloma. We analysed granulomas from tissues removed from TB patients who had undergone surgery because of severe lung damage. 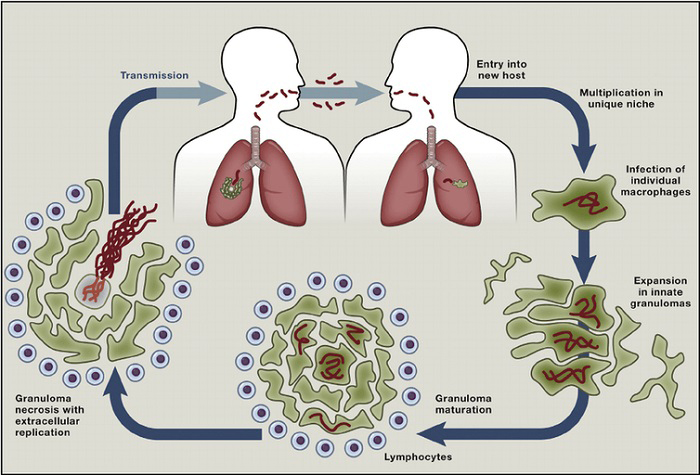 We used tools that allowed us to analyse all the proteins associated with each region of a specific granuloma type. More than 3000 proteins were identified across all granuloma types.

One of the proteins we found LTA4H (leukotriene A4 hydrolase) promotes the release of pro-inflammatory lipids called leukotrienes which drive inflammation in the lung.

Another pro-inflammatory protein we found was TNF. In moderate amounts this protein is important for early response to infection but in excess it can promote tissue damage.

This balance between pro and anti-inflammatory proteins signals are important for the disease outcome, as exaggerated inflammation could eventually lead to tissue destruction. If this balance is not attained the TB disease may become worse.

Recently TB research efforts have focused on the development of immune-specific treatment strategies that help the body to control infections. Such strategies are known as host-directed therapies.

Our study identified some protein candidates that could be explored in guiding development of host-directed therapies that hamper inflammation during TB disease.

By limiting inflammation, these therapies are likely going to inhibit tissue destruction and reduce bacterial spread throughout the lung.

These molecules work by modulating inflammation and activating anti-bacterial defences within immune cells. Those that work by limiting tissue damage include Zileuton, which blocks leukotriene synthesis and reduce lung bacterial growth and damaging pathology.

In addition, other non-steroidal anti-inflammatory drugs such as Aspirin are been explored for their ability to reduce inflammation.

Success of these efforts will surely add huge value in addressing the clinical demands in the treatment of TB. Currently, the disease is treated with first-line drugs that target the bacteria, but are also marred by the problem of drug resistance.

A number of patients respond poorly to standard treatment protocols due to drug resistance. Host-directed therapies will provide much-needed treatment alternatives for such patients.