In 1966, then New York Senator Robert F Kennedy visited South Africa, bringing with him the hope that one day this country would abandon race politics – and a message that individual agency can change the world. The 50th anniversary of his visit will be commemorated at a special event at UCT on 4 June 2016.

Robert F Kennedy is described as one of the great “what ifs” of American politics.

When he was assassinated in June 1968 in the kitchen of a hotel in Los Angeles, he had just won the California and South Dakota primaries to be the Democratic Party's presidential candidate. For a brief moment, it looked as if he might follow in the footsteps of his brother President John F Kennedy, who had also fallen victim to an assassin's hand.

What if the 42-year-old Robert Kennedy, an active campaigner for the civil rights movement in the United States and outspoken opponent of the war in Vietnam, had become president? For starters, his presence in the White House might have brought a quite different set of pressures to bear on apartheid South Africa and brought this country's darkest chapter to a speedier close.

Two years prior to his death, almost to the day, the National Union of South African Students (NUSAS) invited Kennedy to speak at UCT. And to the surprise of both his own and the South African government, he took up the challenge.

Hesitant to snub a potential future president of the United States, the South African government granted him a visa but proceeded to largely ignore his visit, while keeping him and those he met under a watchful eye.

At UCT on 6 June 1966, Kennedy made his “Ripple of Hope” speech, which many regard as the finest of his career. The occasion was NUSAS's annual Day of Affirmation, which was held to reaffirm the university's commitment to academic and human freedom.

In it he outlined his vision of a more just and peaceful world and encouraged students to take up the challenge of creating a new world order. The most famous paragraph is inscribed on Kennedy's gravestone and remains one of the most quoted speech fragments in American politics. It reads:

“Each time a man stands up for an ideal, or acts to improve the lot of others, or strikes out against injustice, he sends forth a ripple of hope, and crossing each other from a million different centres of energy and daring those ripples build a current which can sweep down the mightiest walls of oppression and resistance.”

During his time in South Africa, Kennedy spoke at the universities of Stellenbosch and the Witwatersrand. He met Chief Albert Luthuli, who was living under a banning order near Stanger, and was overwhelmed with public support during a drive-through in Soweto. No doubt, he left this country with a much clearer understanding of what was at stake.

A legacy of his visit was that many boys born in Soweto around that time were named Robert Kennedy, or just Kennedy, in honour of him.

All this is described in the documentary RFK in the Land of Apartheid: A Ripple of Hope by Larry Shore and Kathleen Kennedy Townsend. 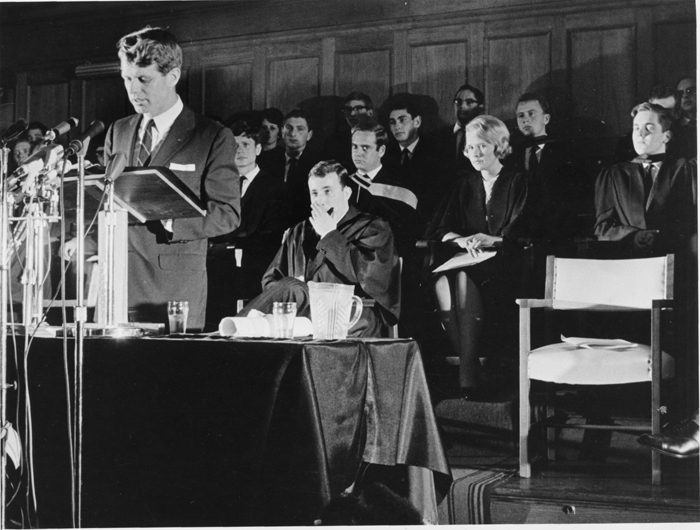 Robert F Kennedy at the podium in Jameson Hall in 1966.

UCT, in conjunction with the US Embassy and Robert F Kennedy Human Rights, will host a special event on the afternoon of 4 June 2016 during which several people will reflect on the legacy of this speech.

The keynote speaker is his daughter Kerry Kennedy, who is president of Robert F Kennedy Human Rights. Among other projects, the organisation has developed an innovative Speak Truth to Power curriculum on human rights for use in the classroom.

For an invitation to this event, please RSVP via this electronic form.