Sadiq Toffa, the nGAP scholar with a commitment to transformative knowledge

The New Generation of Academics Programme (nGAP) is an initiative funded by the Department of Higher Education and Training (DHET) in partnership with individual universities that recruits young scholars into permanent academic positions at South African universities. All nGAP scholars are mentored by a senior academic in their department for the duration of the programme. They are also given a reduced lecture load, which allows them to concentrate on obtaining higher degrees.

The first three years of the six-year nGAP are development years, while the following three serve as an induction for the growing academic. The nGAP scholars are appointed as full-time academic staff from inception and follow a standard three-year probation period.

Sadiq Toffa took up an nGAP lectureship at the School of Architecture, Planning and Geomatics earlier this year. Toffa, who was born and raised in Bo-Kaap, Cape Town, has an immense passion for cultural heritage and transformative knowledge.

Toffa obtained a professional graduate degree in architecture from UCT and a master's in Human Settlements from the University of Leuven, Belgium. He was recently a visiting researcher at the London School of Economics and Political Science as a Commonwealth Scholar. As a visiting researcher in the Centre for the Study of Human Rights, he wrote a PhD proposal and took up advanced interdisciplinary reading and course work. Currently he is a PhD student in UCT's School of Architecture, focusing on critical heritage studies.

His theses in both his graduate and postgraduate degrees brought together critical theory and cultural theory in the built-environment sciences as a way of addressing socio-economic justice and cultural justice as transformative research within architecture.

“[The project] is part of the interdisciplinary work I want to engage with. It's a deeply collaborative and productive exercise. The curatorial work that has been carried out over the past months will carry on throughout the rest of the year. It's about engaging heritage communities within and beyond the UCT environment. It is an intellectual and research project, but it's also a material project that has spatial consequences,” says Toffa.

The Decolonial Alternatives Project Space aims to construct an innovative public sphere. Toffa aims to pull in different groups within the university at various stages of the project.

“I don't only want professors to be a part of this, I want postgraduate students and new academics like myself involved because we have important things to say,” he says. 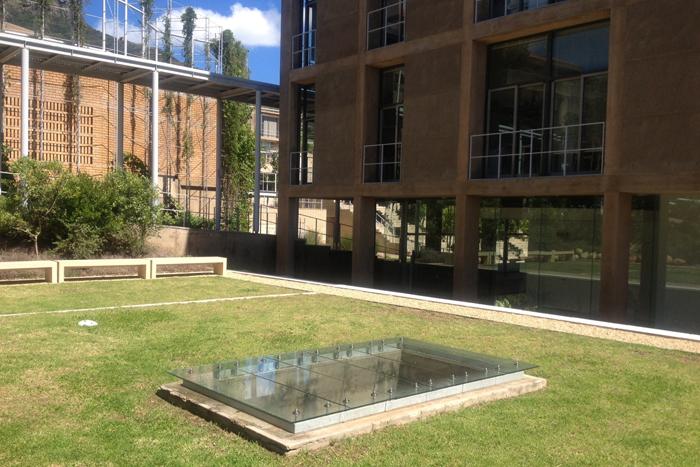 The Rustenburg Burial Ground, which can be found on UCT's middle campus between All Africa House and the School of Economics, commemorates the slaves buried at the Rustenburg farm.

The project was initially a design competition for a statue or plaque at the Rustenburg Burial Ground, but it has since evolved. Toffa says: “What the project is trying to do is construct a new kind of public sphere, as public spaces in contemporary liberal democracies are subject to all form of closures and exclusions, which are debilitating for democratic life. So I'm trying to explore alternative forms of democratic life, which necessitates the rights of communities to knowledge, the rights of communities to research.”

The project has been a long-haul task as administrative processes have been approved in dribs and drabs, but Toffa aims to ensure the open-air memorial will be accessible to everyone, even those not within the UCT community. “It's meant to be a public space which will be accessible to anyone, not just staff and students. Anyone can walk in this space and participate,” he says.

The first, interpretive phase of the project is aimed to be completed later this year. The final phase will include the reactivation and landscaping of the burial ground itself.

“Its history is literally and figuratively buried, nobody knows what this lawn means. This is indicative of the sense of black alienation within this campus, and here we have an opportunity to address that with this project. Here we have one of the most important material markers of black belonging to this campus as a historical site that extends from our contemporary moment into the early days of the colonial settlement. This does important transformation work as it helps with important discussions of decolonial knowledges,” explains Toffa.

“The fact is that it isn't one of the iconic spaces of the university, it isn't in front of Jameson Hall or on the Jameson axis, and it doesn't speak with the kind of colonial symbolism that those monuments carry. It's something that is far more intimate and subdued, so I think for that reason becomes more discursive and critical.”

The second prominent project that Toffa is working on is as the nominator of the World Monuments Fund. The fund is a charity organisation based in the United States that is aimed at preserving cultural and heritage sites globally. Toffa recently put in a successful nomination for the community of Bo-Kaap in central Cape Town, which was declared one of the most valuable and threatened cultural heritage sites in the world.

“Bo-Kaap is the only multi-ethnic community within central Cape Town to have survived the centuries of colonialism, but for reasons of cultural misunderstanding and economic expediency it remains very threatened today,” he explains.

The fund promotes support for new critical research and community-focused development to address these challenges. Toffa hopes to build institutional partnerships between global agencies, the university and communities.

“These projects and the way they have been constructed come at a time that is very urgent within our society and within our university. We see a new generation of black intellectuals and critical thinkers who are disenchanted with the conditions of freedom that we've inherited within the post-apartheid [era], and can articulate different struggles and those of our parents. We see this with the myriad of student movements,” says Toffa.

Toffa hopes to see the university transform into a place where there will be a supportive and productive institutional platform where interdisciplinary and transdisciplinary work can be facilitated.

“What kind of society and what kind of university do I hope to be a part of in six years' time when the nGAP runs its course? That's where a black intellectual such as myself, engaged in decolonial work, will be less of an exception,” says Toffa.