Fast-tracking professors is key to transformation

In 1986, halfway through his medical degree at the University of Natal, Bongani Mayosi took a year off to do pure research (BMedSci), returning later to finish his MBChB. It was one of the crucial factors that fast-tracked his journey to a full professorship only three years after getting his PhD at Oxford in 2003.

Mayosi believes these factors can be replicated in the faculty to boost transformation.

“We can create professors in five to 10 years after completion of professional training, but the conditions have to be right,” says the dean-designate who will lead the faculty from 1 September this year.

The shortage of black, especially black women, professors has been a stubborn obstacle to transformation where the faculty's current cohort is predominantly white, ageing and male.

But growing a new and diverse cohort of professors takes careful planning and commitment, both in the faculty and the university, says Mayosi.

“In academia, the path is well-trodden. There are formulae and the rules are clear. But we [the university] must provide the system.”

His own journey began in a church mission hall in the Eastern Cape where volunteer parents taught him. He matriculated at 15 and followed his father into medicine. Fortunately, he fell in love with research early and by the time he'd graduated as a new doctor in 1989, he'd published two papers, the first in the South African Journal of Science.

But even with “a bit of a head start”, Mayosi believes he took too long to become a professor.

“It was long only by neglect. These things must be planned. If I'd struck gold early – if I'd found a good supervisor and a good topic that could have lead to good papers and outputs early – I could have got there faster.”

Early exposure to research is the first of four factors he believes are vital to grooming a new cohort of professors. “We have a responsibility to instill a love of knowledge and research early in our undergraduates, but we must also expose them to an early stint of full-time research at a reputable institution. If you want to produce a Nobel prize-winner, they must be exposed to research when they're young.”

The faculty already has in place an “interrupted” medical degree where medical students can take a one-year research degree at honours level before continuing their studies, as he did as an undergraduate. This programme has now been adopted and funded by the Medical Research Council as the National Medical Student Research Training Programme for South Africa.

The second critical factor is time – high quality training in research is best done full-time. This will give candidates the opportunity to do their PhDs within three to four years. Support is vital at this stage. And the process is easier for those who commit to full-time research under the guidance of a good, committed supervisor, says Mayosi.

He was fortunate to have Hugh Watkins as his supervisor at Oxford, “probably the most influential person in my early scientific career”.

Third, choose a good research question; not something that's been discovered.

“A lot of research people do is wasteful because it seeks to discover what is already known. Does smoking cause lung cancer in the Venda? Of course it does. It doesn't matter that a study has never been done in Thohoyandou. Identify problems that need a solution.”

This is not hard to do in Africa, says Mayosi. He chose poverty-related heart diseases, such as rheumatic heart disease – a neglected disease in Africa and other poor regions that is easily prevented with penicillin. Untreated, it can cause heart valve damage and heart rhythm problems. He now leads the Global Rheumatic Heart Disease Registry (the REMEDY study).

The fourth factor to forming a new cohort of professors is good funding. Scholarships are crucial since they allow candidates to put their heads down and not worry about “feeding the wife, two children and the dog”, as in Mayosi's case.

And the system should work for women, particularly in their child-rearing years. With his wife, Nonhlanhla Khumalo, a full-time researcher and associate professor at UCT, Mayosi knows this well.

Nurturing a new cohort of professors is a national imperative. The ambitious National Health Scholars Programme hopes to produce 1 000 medical doctors by 2022. The minister of health, Dr Aaron Motsoaledi, kicked off their programme in 2013.

“I don't know if we'll get there, but we're pushing hard,” notes Mayosi. “The way we're going to do it is by getting funding, ensuring people are trained by the best mentors in the world, working on the right topics and starting early.” 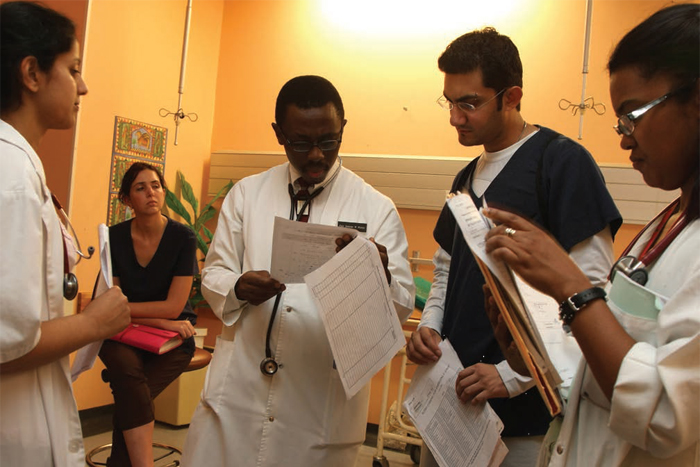 Conferring: Prof Bongani Mayosi with registrars and medical students on a ward round.

When he took over as head of the Department of Medicine at UCT and Groote Schuur Hospital in 2006, he was a trailblazer – the first black person to head the department. The department was also misaligned – it was geared to treat the diseases of some five million South Africans, not all 55 million.

“We had divisions for every part of the body: nephrology, cardiology, neurology … everything except infection. We needed a division for infectious diseases such as TB and malaria and HIV/AIDS – a flagship division for flagship problems [which was established as the Institute of Infectious Disease and Molecular Medicine]. As a department we had to become relevant to 55 million South Africans.”

Given South Africa's health challenges, especially in rural areas, transformation requires “all talent on deck”, says Mayosi. Besides changing the demographics and size of the professoriate, it's important that the faculty reorient the content of its work and the curriculum to address local need.

Transformation is also a requisite for the faculty to remain a world leader. In this context, world class no longer makes sense, Mayosi says. “World leader” is the new dean's first choice for a slogan that will guide the faculty in the future.

A call to step up

Taking on the deanship was never part of Mayosi's plan, but with the Rhodes Must Fall- and Fees Must Fall-driven events of 2015 and 2016, it was a “critical moment” in the country's history. With “a little leaning at the right time”, he agreed to rejoin the struggle for a better South Africa.

“For me it was a call to serve. But we've got to be constitutional about it and set up processes that will really achieve social justice. All of us must come forward to make a contribution.”

He has no illusions about the complexity of the task ahead. “I told them [the faculty] that they were taking a risk because I had no experience of being a dean – but that I'd do it with them.”

The complexity extends to the faculty's makeup: 2 000 staff and 4 000 students. The staff are employed by different entities: some by the province, others by the National Health Laboratory Service, while others are research-funded (this group of 600 is the largest) or funded by the university.

“So we have many types of staff and we need to work hard to bring them all into the business of the faculty so that there's no sense of alienation from the greater university project. We need to work as a team.”

Where the students are concerned, there are basic issues linked to serving communities in need that must be addressed.

“It's a problem if a student can't take a patient's history in isiXhosa. We need people who are competent to work with the majority of people. These are things we must work together to identify.

“We need to rupture from the past; we need a new future and direction relevant to the needs of 55 million South Africans and a billion Africans. That's the key in the transformation project.”

But there is a new dilemma for the designate dean who is a committed researcher (Mayosi will keep the title of professor when he takes the mantle of dean). Just after his appointment as dean, Mayosi was awarded a National Research Foundation A-rating, putting him among the world's top brass (a mere handful) in cardiology research.

He's sanguine about the temporary trade-off. It will take a lifetime to solve some of the country's and continent's health problems. For this new era of his career, Mayosi is committed to driving the faculty's mission and ensuring that it becomes a home for all South Africans.

“Talent, fortunately, is evenly distributed. But we must make sure that talent meets opportunity so that it can flourish.”