01 April 2016 | Story Helen Swingler. Photos UCT Plant Conservation Unit.
For most of her 52 years, Marianna Lot has lived in Paulshoek, a town barely 1 000-strong on the edge of Namaqualand. It’s one of 10 villages in the broader Leliefontein communal area that are reliant on goats and sheep and the thin grazing of the Succulent Karoo.

Here Marianna has raised four children and now two grandchildren. With her acute sense of the land and the reciprocity between plants, animals and people, she would like to have studied botany. But opportunities for a Namaqualand farm girl were limited. Instead, she found a home with the Plant Conservation Unit’s (PCU) project in Paulshoek, thanks to Professor Timm Hoffman who recruited her 16 years ago.

As a botanist interested in the broader socio-ecological issues and how these change with time, Hoffman was struck by the long-term research opportunity the area offered. In time this became an interdisciplinary project involving chemistry, biology, history, resource economics and anthropology.

Since then, 20 years of data have provided rare longitudinal sequences showing variations in rainfall, plant growth, livestock production and particularly medicinal plants used in the community’s social networks of care.
These variations have been mirrored by developments in the socio-ecological environment in Paulshoek and the broader village commons. The project has created jobs, supported farmers and benefited many people, both directly and indirectly, said Hoffman. The work won him the Alan Pifer Award in 2006.


Marianna has been the PCU’s mainstay in Paulshoek. She measures rainfall and counts tortoises and mice and other small things. She records when the eenjariges bloom and measures their growth. She keeps a tally of the lambs born and knows which plants are toxic to the grazers – but good for human medicinal use. 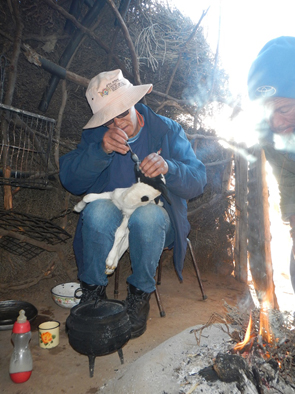 Marianna Lot hand-feeds a lamb in the Namaqualand town of Paulshoek.


Take the kraalbos (Galenia Africana), which is full of sterols for treating skin ailments. But it’s also a ‘nursing’ plant that shelters the perennial seedlings on degraded land.

“Ek sien alles en nog wat,” she says. She learnt how to observe from her father.

[“My father was a healer, a herbalist. I know which plants make good medicine and which make good fodder for the animals.”]

For the PCU project, Marianna has also learnt how to conduct medium- and long-term household surveys. These gauge changes in the quality of life in Paulshoek. Already she’s seen the community upgraded from paraffin power to electricity and from well water to tap water.


Paulshoek is a unique place, a good place to live. The townspeople sleep with their windows open with nothing to fear − except mosquitoes, she quips.


Living at the edge


The relationship between the researchers, their students and the community is a hallmark of the project. Travelling deep into the Northern Cape, Hoffman has trained others like Marianna. He took students and field ecologists into these remote areas to support communities living at the edge.

The research vehicle (first sponsored by the Mazda Wildlife Fund and later donated to the PCU) carried all of them in recent years: six researchers; two postdoctoral students; 10 PhD, 10 master’s and nine honours students; as well as many undergraduates.

Losing the bakkie in January has been heart-rending, says Marianna. They’ve lost their means to connect communities.

Kirtanya Lutchminarayan, an honours graduate who worked in Paulshoek, says, “It’s not just a vehicle, but a tool to reach out to communities and preserve the environments we all live in.” Far from the student protest in the Western Cape, it’s hard to understand, says Marianna.

By bringing students to Paulshoek, the bakkie helped to put the town on the map and, in turn, Paulshoek gave them PhDs, says Marianna. But the relationship between the students and the community is far richer and more complex as a life experience rather than a simple transaction, says Hoffman.

Many of those postgraduates now work in the broader conservation sector, adding to our understanding and management of the environment, says Hoffman.

For Marianna, still smarting from the senselessness of the loss, it’s about the interconnectedness of everything, as the plant-rich Succulent Karoo biome of Namaqualand shows.

[“Every plant has its use; every plant serves its own unique function.”]