Scientists at UCT and the University of California, San Francisco, uncover the genomic blueprint of bat wing development

Linked studies identify gene regulatory switches that turn bat genes on and off at crucial times during limb development, with implications for understanding how differences in the size, shape and structure of limbs are generated in mammals in general, including humans.

An international team of scientists from the University of Cape Town (UCT) and the University of California, San Francisco (UCSF), has for the first time identified both genes and gene regulatory elements that are essential in wing development in the Natal long-fingered bat (Miniopterus natalensis), a species widely distributed in east and southern Africa.

Bats are the only mammals capable of powered flight – an ability that evolved about 50 million years ago.

The structure of the bat wing, as noted by Charles Darwin in 1859 in On the Origin of Species, is widely used among biologists as an example of both evolutionary novelty (the appearance of a new trait) and vertebrate homology (shared ancestry between two seemingly different structures) – in this case, the wing of the bat and the forelimb of other mammals.

Mining the origin of flight in mammals 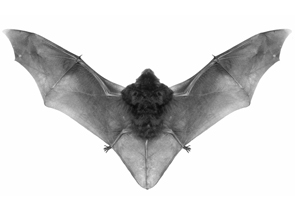 An adult Natal long-fingered bat, Miniopterus natalensis. The bat wing is formed by the retention of the membrane between the elongated 2nd to 5th fingers of the hand. In contrast the thumb is a similar length to the five toes of the foot. Additional membranes connect the 5th finger to the foot, and the foot to the tail. Image supplied by Nicola Illing and Nadav Ahituv.

The path of bat evolution is unclear, noted Nicola Illing, co-senior investigator based in the Department of Molecular and Cell Biology at UCT: “The fossil record does not show the transition from tree-climbing mammals with short, free digits to ones that have elongated fingers supporting a wing. We have had the privilege of being able to use the tools of modern genetics to decipher how genes are turned on and off during bat embryonic development to transform a mammalian forelimb into a wing.”

“While some attempts have been made to identify the molecular events that led to the evolution of the bat wing, these have been primarily done on a 'gene by gene' basis,” said co-senior investigator Nadav Ahituv, a UCSF professor of bioengineering and therapeutic sciences and faculty member of the UCSF Institute for Human Genetics.

“This work lays out a genome-wide blueprint for the causes that led to the development of the bat wing, a key evolutionary innovation that contributed to bats becoming the second most diverse order of mammals.”

The new research was presented in two papers published on March 28, 2016, one in Nature Genetics and one in PLoS Genetics.

For the Nature Genetics paper, the scientists, including co-lead authors UCT PhD student Stephen Schlebusch and Walter L Eckalbar, PhD, a postdoctoral fellow in Ahituv's laboratory at UCSF, first sequenced the entire genome of the Natal long-fingered bat. They then used the latest sequencing technologies to take a snapshot of which genes were active to complete a genomic analysis on the developing wings and feet of bat embryos. Zoe Gill, an MSc student in the Illing lab, characterised where a number of key regulatory genes and novel long non-coding RNA transcripts were precisely expressed in bat embryos collected from the De Hoop Nature Reserve, validating the high throughput molecular genomic analysis. 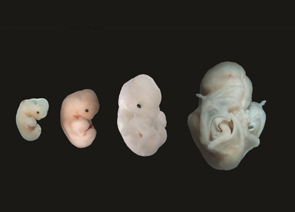 Natal long-fingered bat embryos of different ages. While the limbs of an early embryo are similar to other mammals, the digits of the wing start to elongate from an early age. The retained membranes and long digits are clearly visible in the mature embryo. Image supplied by Nicola Illing and Nadav Ahituv.

The researchers identified over 7 000 genes that are expressed differently in forelimbs compared to hindlimbs at three key stages of bat wing development. They found that many signalling pathways are activated differentially as well, including pathways important in limb formation, digit growth, long bone development and cell death. Also expressed differently are many proteins associated with ribosomes – molecular machines found in all cells that are responsible for protein production during limb development.

“It took bats millions of years to evolve wings,” said Eckalbar. “Our work shows that they did this through thousands of genetic alterations, involving both genes used by all animals during limb development and genes whose usage in limb development may be unique to bats.”

“This gives us our first detailed picture of the genomics behind bat wing development,” said Ahituv. “Importantly, this work identified not just which genes are expressed at what stage of growth, but the genetic switches in the genome that are responsible for turning those genes on and off.”

“The events that initiate the dramatic elongation of digits in the bat wing happen much earlier than previously reported,” said Illing. “This is predicted from the differential activation of key signalling pathways which pattern the hands and feet of all mammals.”

Ash Parker, an honours student in molecular and cell biology, together with Mandy Mason, a PhD student, and Illing, confirmed this prediction by showing that the size of cartilage condensations that subsequently form the scaffolds for formation of bones are much larger in the developing bat wing compared to bat feet.

These BARs are “genomic sequences that are conserved in evolution and have not changed in most vertebrates, but experienced rapid changes in the common ancestor of today's bats,” explained Friedrich, a member of the laboratory of co-senior investigator Katherine S Pollard, PhD, a senior investigator at the Gladstone Institutes and a faculty member at the UCSF Institute for Human Genetics.

They mapped these BARs onto areas that were predicted to be important switches that turn genes on during limb development and found 166 BARs with the potential to influence bat wing development.

The researchers selected five of these BARs and tested their bat sequences in transgenic mouse embryos. They found that all five bat sequences were capable of switching on a reporter gene in the developing mouse forelimb and that three bat sequences showed different activities than their mouse sequence counterparts. One region, BAR116, is located near the Hoxd genes, which are known to be involved in limb patterning and skeletal growth.

“The pivotal role of Hoxd genes in regulating the formation of the autopod (our hands and feet) has been known since the early '90s, with current work showing that removing these genes in developing transgenic mice results in slight reductions of digit lengths,” said Mandy Mason, a PhD student at UCT.

She has shown that Hoxd10 and Hoxd11 are far more active in bat wings compared to hindlimbs during bat embryonic development. She explained, “In the bat, dramatic alterations in Hoxd gene expression correspond to the large differences in the length of the bones that make up the hand of the bat wing. This finding demonstrates how examining extreme, but natural developmental events, such as the formation of the bat wing, can give us potential roles of genes in a system.”

Illing noted that, aside from the insights it provided into bat wing development, the project was the first to identify genetic switches on a genomic scale using embryos from wild-caught animals, rather than laboratory animals.

The field-based preparation methods for doing this work were pioneered by two UCT graduate students, Mandy Mason and Dorit Hockman, during their honours year in the Department of Zoology in 2005 under the supervision of Professor David Jacobs (Department of Biological Sciences, UCT) and Nicola Illing.

“It is gratifying seeing this work come to fruition after a decade of research. The collaboration with the Ahituv lab, was sparked by our chance encounter over lunch at the 12th International Conference on Limb Development in Quebec in 2012, where we discussed our respective research interests in human hand congenital disorders and my interest in the evolution of the bat wing,” said Illing. Vertebrate forelimb skeletal elements are highly diverse. The functional requirements of the limb (how it is used to interact with the environment) correspond to its basic structure with species that manipulate objects (grasping) typically having five free digits; those that run (running) having elongate fused elements; those that swim (swimming) showing shortened robust elements that support a webbed structure; and those that fly (flying) exhibiting several means of supporting an enlarged surface to form a wing. The basic skeletal elements are shared among all vertebrates with the humerus (red), radius (green), ulna (blue), metacarpals (orange) and phalanges (white) indicated. Image by Mandy Mason (PhD student, UCT).

Ahituv agrees: “This work will increase our understanding of how alterations in limb development could lead to limb malformations in humans. Potentially, it could eventually help contribute to the development of tools and techniques to prevent such malformations.”

Other authors of the PLoS Genetics paper are Julia E VanderMeer, PhD, and Jingjing Zhao, PhD, of UCSF; and Malcolm Logan, PhD, of the National Institute for Medical Research and King's College London, UK.

Both studies were supported by funds from the National Institutes of Health and the National Research Foundation (South Africa).