A family's agony when a child goes missing can be almost unbearable. When time stretches into months and even years without a trace, the loss cuts even deeper. While it is tragic to lose a child, research by UCT PhD graduate Kavita Lakha could help to bring some closure.

Lakha's six-year-long research focused on the age of union of the epiphyses (the rounded ends of long bones) of the major joints of the human body in South African children. The research has revealed information that could ultimately help in identifying the remains of missing children.

“We are able to estimate the age of the child through the bones we find,” says Lakha. Through her PhD research, Lakha has developed a standard which can determine the age of a child or teenager through low-dose X-rays. The study can also be applied to forensic cases involving dry bones.

Lakha was motivated to pursue the research through her work at the National Prosecuting Authority (NPA), where she is a special investigator in the Missing Persons Task Team dealing with Truth and Reconciliation Commission (TRC) cases.

Her research may seem bleak, but Lakha has witnessed the relief when family members have been told that the remains of a missing relative have been found, often years after they had disappeared.

After trawling through thousands upon thousands of police dockets followed by mortuary records and unmarked graves, Lakha recently discovered and identified the remains of a teenager who had been missing for 26 years. Finally being able to knock on the door of the home of the mother whose son had gone missing is a moment she will never forget. 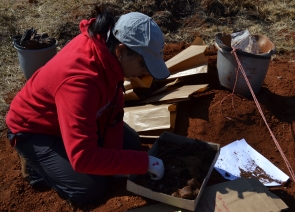 “We thought the case would never be solved. I still see it as miraculous. When I met the mother and showed her a photograph, which she identified as being her son, she was beside herself. It was very emotional. It was incredibly sad, but she was also relieved that we'd found his remains. She could finally put her son to rest,” said Lakha.

She added, “Closure is very important. When there's no body, there's always uncertainty. While tragic to lose a child, it's devastating not to find their remains. Finding and identifying remains or a body brings closure and family members are able to mourn their loss.”

Lakha used the Lodox statscan system as a tool of analysis. It emits low-dose radiation and provides a complete body scan in 13 seconds. The results of Lakha's study show that there are no significant differences between the state of bone maturation in children of different South African biological and socio-economic groups, but that there can be marked differences between children from different countries. Lakha said it was important to develop standards that determine age in South Africa, as children from different countries mature at different ages.

Lakha said she was trying to foster relations with various mortuaries to see how well her proposed new standards could be implemented. Her research provides an alternative to the Greulich and Pyle method, which was developed in 1959 and is still the most commonly used method in South Africa.

Meticulously sorting through the detail of the TRC cases is a pivotal slice of work for the NPA, says Madeleine Fullard, the director of the Missing Persons Task Team in the NPA.

Fullard says that 500 people were officially reported missing to the TRC, although the number is believed to be closer to 1 000 within South Africa, and even more when taking into account the number of people who went missing while in exile under apartheid. The unit has managed to trace the remains of 100 people identified by the TRC and has exhumed their bodies during special ceremonies attended by bereaved family members.

“Part of the TRC's work is throwing a light on the past and understanding the nature of political violence. Our work helps to contribute to this. We hope our project will spark a wider process on the African continent, where many people have gone missing,” says Fullard, who is keen to share the knowledge that the unit has gleaned over the years.

“If you think of the 9/11 victims in New York, every fragment of their bones was DNA tested, but in Africa we have mass graves, such as in Rwanda. There are only a handful of forensic anthropologists on the African continent. This shouldn't be the case and it's very important that it changes.”

For individual families, as painful as it can be to hear the news, at least it helps to unravel the mystery of why they died.

“It can be a lifelong agony for a parent when a child disappears. The torment of the imagination is never-ending. Even though we may not always find a child or young person alive, we can at least try to find out what happened,” says Fullard.

For Lakha, who was awarded her PhD by UCT in December 2015, her dedication and persistence in tracking down cases will continue.

“It's a gruelling job but it's immensely rewarding when we have a breakthrough and we're able to help people to finally find some answers.”

Lakha, a recipient of the Nelson Mandela Scholarship, was awarded her PhD by UCT in December 2015 and was supervised in her research by Professor Alan Morris in the Department of Human Biology at UCT.