A masterclass in negotiation skills

An audience of 200, comprising students, staff and two politicians, attended a forum established by the new director of the School of Economics, Professor Lawrence Edwards, and the former ambassador of South Africa to the World Trade Organisation (WTO), adjunct Professor Faizel Ismail.

The public lecture was occasioned by the first visit to Cape Town of the director general of the World Trade Organisation, Roberto Carvalho de Azevêdo, who is a long-term friend of Prof Ismail.

Prof Ismail's PhD explored the role of South Africa in the WTO before apartheid. This was a fitting starting point for the afternoon's discussions.

Prof Edwards said he was proud that South Africa was not a passive participant in the global arena, but has helped, through the WTO, to define the rules governing international trade. He added that he welcomed a forum in this space, as academics should be debating trade policy critically and constructively.

Also on the panel was the minister of Trade and Industry, Dr Rob Davies, who has led South Africa's new trade and industrial policy. He noted that the apartheid regime declared South Africa to be a developed country during the earlier WTO negotiations. This set South Africa on an uneven playing field as it was required to reduce import-tariff protection by more than other emerging economies. The solution, he suggested, was to promote regional integration across Africa.

Azevêdo, who is the sixth director general of the WTO, is a former ambassador of Brazil and also led that country's battle for fairness in the cotton industry against the United States – a battle which still wages.

He recalled Nelson Mandela's visit to Geneva where he gave a speech that is still talked about. Mandela told the WTO that it provided the foundation on which deliberations could be built. However, to realise those aspirations, “wise work” needed to be done.

“The need for wisdom is more evident than ever,” said Azevêdo. 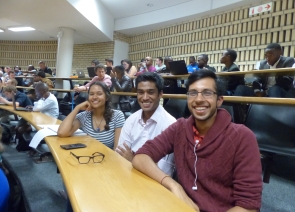 He added that South Africa had a leading voice in the WTO as the current chair of the Dispute Settlement committee is a South African, Xavier Carim.

Azevêdo's claim that the WTO was no longer a “rich man's club” was challenged by a politics student who argued that the fact that it had taken 30 years to achieve a measure of agricultural reform was evidence to refute this.

Azevêdo responded: “It is no longer true. Forty-three members are African. It's not a small club, it's a big club. Everybody has a seat at the table, everybody has a say.”

He said there was great potential for growth in the African market, as trade with neighbours on the continent accounted for just one tenth of African trade. For example, South Africa's biggest partner is the European Union.

The recent Nairobi conference, the first in Africa, was where South Africa played an important role in attempting to level the playing fields for farmers in developing countries and helping them to compete on fairer terms. However, this process was “moving too slowly, not delivering enough.”

At this point Azevêdo gave a classic negotiating tip. He said that whatever idea you propose, you need to think not only with your own shoes. If you are a representative of a developing country, think what a guy from the developed country would need. Putting the other guy's shoes on your feet is the hardest part. But it is important to find some degree of commonality. Developed countries need to think what is happening on the other side.

He said: “I hate to break it to you, but fairness is not always there. What drives negotiations is the interests of both sides. It's always a trade-off.

“Putting on the other guy's shoes does not mean that you are surrendering. It gives you leverage. If you are only looking at your cards, you're missing the game. You have to know your cards and extract as much as you can by giving as little as you can.”

He added: “Everybody should be unhappy at the end of the negotiation.”

“In Bali we achieved what was deemed to be impossible. Nigeria was more than impossible, but we pulled the rabbit out of the hat. But we are running out of rabbits.”

He added: “The potential ahead is huge. Everybody is at the drawing board to reflect on what can be done. This brings me back to Nelson Mandela. We need wise work. You have the brains here to do the wise work that is needed.”

Story and photos by Carolyn McGibbon.