A UCT-led clinical study on a urine-test able to diagnose tuberculosis in severely ill HIV patients has led to a call for its immediate use in public health programmes because it has the potential to save lives. Leading medical journal The Lancet has hailed the results of the UCT-led clinical trial as a “breakthrough” for patients with HIV-associated tuberculosis. The results of the trial were published in The Lancet online on 9 March 2016.

The lead investigator was UCT's Professor Keertan Dheda from the Division of Pulmonology. Co-investigators, also based within the division, include Dr Jonny Peter, Dr Grant Theron, Dr Greg Calligaro and Dr Phindile Gina.

Hospitals in South Africa, and in Africa in general, are inundated with severely ill patients with HIV who also have suspected TB. The TB is often difficult to diagnose because these patients often cannot produce sputum samples, and the TB is often concealed in organs such as the liver, lymph glands or brain where it is difficult to access. Diagnosis is therefore challenging and investigation prolonged. 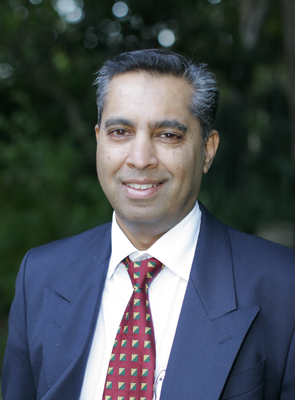 Significance of the trial

In a randomised controlled trial of the LAM urine test in 2 600 patients in South Africa, Zimbabwe, Zambia and Tanzania, the study evaluated the usefulness of using the simple diagnostic test (similar to a urine pregnancy test) to guide treatment in severely ill HIV-infected patients with suspected TB.

The test, which can be conducted by a minimally trained healthcare worker at the bedside, enables a diagnosis in around 25 minutes by simply putting a few drops of urine on a low-cost strip test.

Dheda explains its significance: “Until now it was unclear whether LAM testing made any difference to treatment-related outcomes, such as death, because there are other TB diagnostic tests concurrently being used, and many patients received treatment based on a doctor's 'best guess'. But, using a randomised controlled trial design, this study found that, compared to existing tests and approaches used to guide treatment, the LAM test reduced the TB death rate in hospitals by almost 20%. Significantly, these were results obtained using a rapid and simple-to-use, low-cost, bedside test.”

The results of the trial have now prompted health activists to call for the test to be fast-tracked into public health regimens.

The Lancet too has backed this call: “With the recent backing of WHO recommendations, we strongly advocate that the Determine TB-LAM point-of-care assay should be implemented by national tuberculosis programmes in sub-Saharan Africa to reduce Aids-related inpatient deaths.”