Coldest place in Africa is in the UCT physics department

The Department of Physics at the University of Cape Town (UCT) recently acquired a dilution fridge, which is officially the coldest place in Africa with a temperature of 8.190mK (milli Kelvin), ie 122 times colder than the known naturally coldest place in the universe – the Boomerang Nebula.

The fridge had an arduous journey to the RW James building: originating in Holland, flying to Johannesburg and then being trucked from Johannesburg to Cape Town. Associate Professor Mark Blumenthal has been eagerly awaiting the fridge's arrival for two years and was really frustrated when they opened it up and discovered that this R6.5 million piece of equipment had been damaged while in transit.

Spare parts were delivered to Associate Professor Blumenthal's house, engineers came out from Holland to rebuild the fridge and the team worked throughout the night to assemble the fridge. Currently the local and international team are working to refine the working of the fridge, which is one of the largest and most powerful in the world.

So why the need for the fridge? Is it to keep the physicists chilled? This piece of equipment will be used to study material systems and electron transport. Associate Professor Blumenthal and his team are working with collaborators at Cambridge University and University College London in the field of nano-electronics and are building devices that can track individual electrons and examine the spin on electrons. In order to 'catch' something as small and elusive as an electron, there is a need to cool it to a very low temperature in order to slow it down. 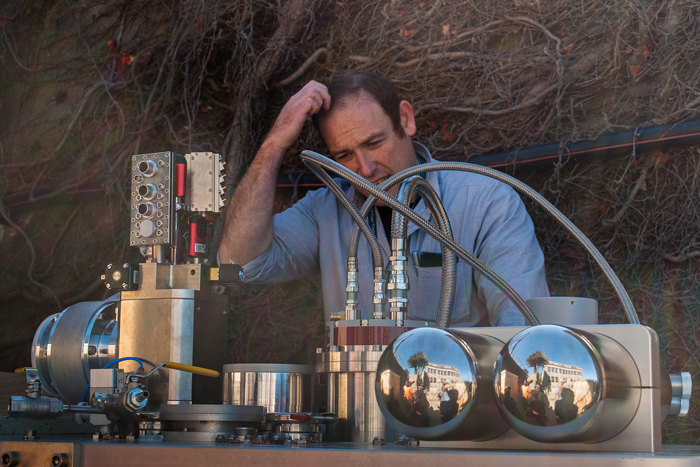 The fridge has a powerful ten tesla superconducting magnet which is 25 000 times more than the earth's magnetic field and allows the physicists to manipulate the spin of electrons. It also has a closed cycle dry system, which doesn't need to replace the liquid helium 3 and 4 – this is a good thing when one considers that helium 3 costs €3,000 per litre and the fridge requires 50 litres. A top-loading probe allows samples to be loaded into the fridge.

Some of the research applications of the fridge are those of quantum computing and metrology, which is the science of standards and quantum cryptography. The fridge will also be used for the training of students in understanding vacuum systems, cryogenics and solid state physics.

Associate Professor Blumenthal's area of expertise is low temperature nano-electronics. He completed his undergraduate degree at the University of the Witwatersrand, his diploma at the University of Bonn in Germany and his PhD at Cambridge University. He worked at the National Physical Laboratory in London and then Siemens Magnet Technology in Oxford before joining the Department of Physics at UCT.