08 March 2016 | Story Natalie Simon . Main Photo Michael Hammond.
Every year in the small Western Cape town of Clanwilliam local schoolchildren take part in workshops hosted by UCT's arts and drama departments, which culminate in the annual Spring Festival in which the children of the town use their new arts and drama skills to tell the stories of San hunter-gatherers, the oldest inhabitants of southern Africa. Professor Pippa Skotnes, director of the Centre for Curating the Archive and Professor Mark Fleishman, programme convener for Theatre and Performance in the Department of Drama played an important role in developing this annual event.

One of the many psychologically scarring impacts of colonialism was the myth perpetuated by Europeans that Africa’s history began with slavery. Africa boasts a rich history and a myriad of fascinating cultures, some of which border on extinction. Of the most threatened are the oral traditions of the San hunter-gatherers, known to be the oldest inhabitants of southern Africa. The Spring Festival, held annually in the small Western Cape town of Clanwilliam, is the culmination of an art and performance project that aims to create a contemporary context for the reanimation of |xam narratives, a San language tradition that died early on in the 20th century.

The project – inaugurated by Professor Pippa Skotnes, director of the Centre for Curating the Archive, in the 1990s as a series of art workshops held at the Michaelis School of Fine Art and then at the UCT field station in Clanwilliam – rapidly grew in scale and focus. Skotnes’ research was on the Bleek and Lloyd collection. This collection, compiled by Wilhelm Bleek and Lucy Lloyd in the late 1870s, is the only record left of the |xam language and of the stories of the people who spoke it.

Skotnes began the project in Clanwilliam with a series of art workshops focused on visual representation of the stories recorded in this collection. “The workshops were aimed at older high-school children originally,” says Skotnes, “as a way to nurture the idea to study further and explore different career paths.”

But what she found was that the older siblings generally were responsible for at least one or two younger children. So it was not long before huge crowds of children were attending these workshops. Thinking that drama students may be better at crowd control than fine arts students, Skotnes asked Professor Mark Fleishman, programme convener for Theatre and Performance in the Department of Drama, to get involved.

“The performance element that Mark and his students introduced simply transformed the project,” says Skotnes. “It engaged the children in a way that art and images just could not do on its own.” Together, students from the fine arts and drama departments hosted a week of workshops for the schoolchildren, which culminated in a carnival-like performance carried out in the streets of Clanwilliam.

The very first Spring Festival saw hundreds of children marching up the street carrying paper lanterns while thousands of community members poured out of their houses to watch, gasping at the beauty of it. The event proved such a hit that Fleishman and his team – consisting of students and professionals from his company, Magnet Theatre – were asked to come back again the following year.

“The next year we came back more prepared,” remembers Fleishman. “WWe made huge puppets of various animals, performers got up on stilts, fire dancers performed for the crowds. We began telling these stories in a very fresh and exciting way.” 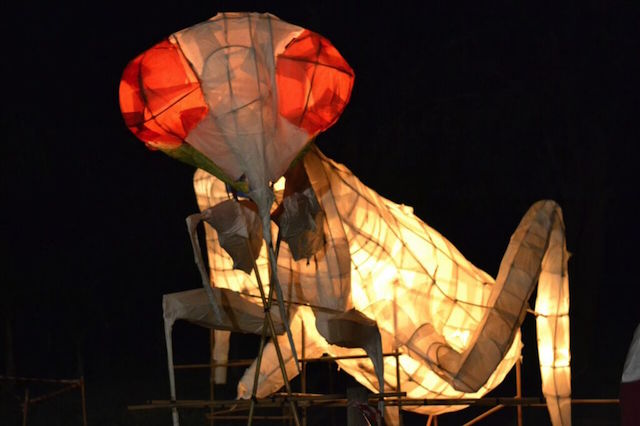 Fleishman says in the early years the performances were mostly carried out by students and professional performers from Cape Town. In later years, however, the children themselves have begun to perform in the festival. Today, the concept has spread and nearby towns, such as Redelinghuys, host similar events, in some cases organised by the young adults who participated in the early festivals.

“When we first started the project it was a very negative thing to be thought of as a descendent of the San people. Many of the children would tell you they were of German or Irish descent,” says Skotnes. There is some evidence that this attitude is slowly beginning to change. At one of the festivals a curious student asked an onlooker what he thought of the annual performance. “I am proud that they are teaching children the old stories,” was his response.

Skotnes and Fleishman also hope the annual event, along with other projects such as the Living Landscapes project, will play a role in showing the children of Clanwilliam the possibilities life has to offer them. “When we started out,” says Skotnes. “We would ask kids what they wanted to be when they grew up and they struggled to answer. Many said they wanted to work at the till in the local Spar.” Now that the children have been exposed to such a diversity of professionals, performers and artists, the pair hopes their horizons have widened.

Fleishman has expanded his personal involvement in the community. He has bought a property in the town and started a community-based drama group in Clanwilliam. But, he says, the highlight of the town’s calendar remains the annual art and performance workshops and the Spring Festival. “When we hold the workshops we never have to recruit. We just open the doors and wait,” says Fleishman. “It’s never long before the children begin to flood through the doors, ready to express themselves creatively by re-enacting some of Africa’s oldest stories: the oral stories of the San.”