South Africa’s first democratic elections in 1994 ushered a new government, society and policy framework into the country. It was a time of high hopes and expectations as the African National Congress (ANC), Africa’s oldest liberation party, took the reins in a peaceful transition of power. The challenges for the new government were immense.

The ANC was now tasked with breaking down the barriers of access to the wealth and employment opportunities previously reserved for whites only. But, just as a doctor cannot prescribe medication for a patient unless she knows exactly what ails him, so too can government not draw up successful policy without deeper insight into the causes of the problems. It was at this juncture where the data-driven research undertaken by Professor Murray Leibbrandt, DST/NRF SARChI Chair in Poverty and Inequality and Professor Haroon Bhorat, director of the Development Policy Research Unit and DST/NRF SARChI Chair in Economic Growth, filled a critical vacuum for policymaking. 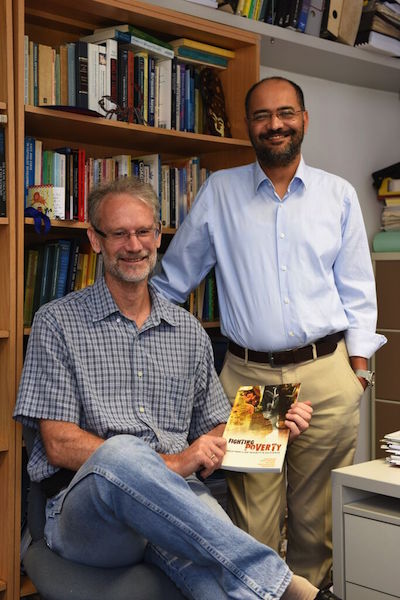 “In the mid-to-late nineties, South African researchers were not particularly sophisticated when it came to analysis of data, for policy in particular,” says Leibbrandt.

“There were a few national data sets that could tell us about the state of the nation, but those data-sets were not being put to use by local researchers.”

Leibbrandt and Bhorat began work on poverty and inequality using those existing data sets in the mid-1990s. They were awarded a grant by the African Economic Research Consortium and headed a national team to work on a series of papers on poverty, inequality and labour markets and the relationship between those three.

This culminated in a book titled, Fighting Poverty: Labour markets and inequality in South Africa. It was largely for the work that went into this book, and its impact, for which Leibbrandt and Bhorat received the Alan Pifer Award.

“The award was in recognition of this project as an initiative for South Africans to take control of their own evidence-based policy-making,” says Bhorat.

“What we were really trying to do,” adds Leibbrandt, “is emphasise the fact that South Africa’s people deserved the best quality, evidence-based policy analysis - and South Africans needed the capacity to do that.”

For the first time, South African researchers were conducting international quality analysis of survey data in these key issues, particularly the relationship between the labour market and the reproduction of poverty and inequality in South Africa. Once the book was published, Bhorat and Leibbrandt received a request from the policy unit in the presidency for a policy brief, something that was rare at that time.

“A big part of our contribution was making sure South African analysis of key policy issues was world class. And that means it is not immediately policy friendly,” says Leibbrandt. “It is important to get the results right, but once you have achieved that, it is also important to be able to communicate those results in a policy environment.”

This data-driven research kicked off a new relationship between policymakers and academics in South Africa. According to Bhorat, part of what their research did was to define the way in which society, and policymakers, began to think about the measurement of poverty and inequality. “Senior policymakers realised they could not proceed on a programme of poverty alleviation or inequality reduction without, not only decent data, but also analysis of that data,” says Bhorat. “That began a process where, before embarking on any new policy formulation, be it the child support grant or minimum wage, the government first asks, where do we get the data and who will analyse it?”

This close proximity to policy and policymakers, says Leibbrandt, is an amazing privilege that comes with working in South Africa. “We work with many of the world’s top scholars on matters of poverty and inequality, but even the most eminent international researchers do not necessarily have access to the policy community that we have,” he says. “Haroon especially has done exceptional work on the policy side. Although he would never admit it, he is probably South Africa’s most influential policy researcher,” adds Leibbrandt.

In his nomination of the pair, Associate Professor Anthony Black, director of the School of Economics, said the work by Leibbrandt and Bhorat established the School of Economics and UCT “as a centre of excellence in this area”. He also applauded the pair for their contribution to applied academic research and policy intervention on these crucial issues.

Looking back, says Bhorat, its quite remarkable how far this field has come. Today this kind of data-driven research is common and the research for which the pair won the award could easily be undertaken at honours level, while the development of research into policy briefs is standard practice. “This is in part because we have developed a large student base, and analytically the questions we ask today run much deeper than they did back then.”

"Soweto township" by Matt-80 - Own work. Licensed under CC BY 2.0 via Wikimedia Commons.