Eagles and agriculture: not a zero sum game

As the world's human population continues to increase, so too does our demand for food. One of the biggest challenges is how to meet this demand and not damage the environment.

Based on experiences from Europe and north America, as natural land is converted to farming, biodiversity suffers. Much research has focused on the negative impact this can have on birds.

Agricultural development is on the rise in Africa. And the world is increasingly looking to it to supply more food. But the impact this will have on the continent's biodiversity remains unknown and under-explored compared with more developed regions.

Our study suggests that some birds of prey can adapt to and even benefit from human-altered landscapes. Case studies like these support the idea that agricultural areas can play an important role in conservation.

Birds of prey are often promoted as useful indicators of the health of the environment. For example, it was the decline of the peregrine falcon that was instrumental in revealing the negative impact of the pesticide DDT in the food chain in the 1960s.

Some birds of prey have also been useful to show how agricultural intensification is harming the environment. As their habitat and prey is depleted, their numbers can shrink.

The case of the Verreaux's Eagle

The Verreaux's Eagle, also known previously as the Black Eagle, holds an iconic presence in mountainous and rocky habitats. It is distributed across much of sub-Saharan Africa. The species is famous among ornithologists for having an extremely specialised diet. Previous studies have shown that around 90% often consists of a single prey type – the hyrax, a small mammal closely related to the elephant.

This species has shown recent declines in South Africa. As a result, its regional conservation status has recently been elevated to vulnerable. One possible explanation for the decline is agricultural development.

Our study explored this. We compared the breeding performance of two populations in the Western Cape province of South Africa. One population living in the pristine Cederberg Mountains, the second in the adjacent Sandveld region. The Sandveld region is lower lying and has been extensively developed for agriculture, particularly potato farming. 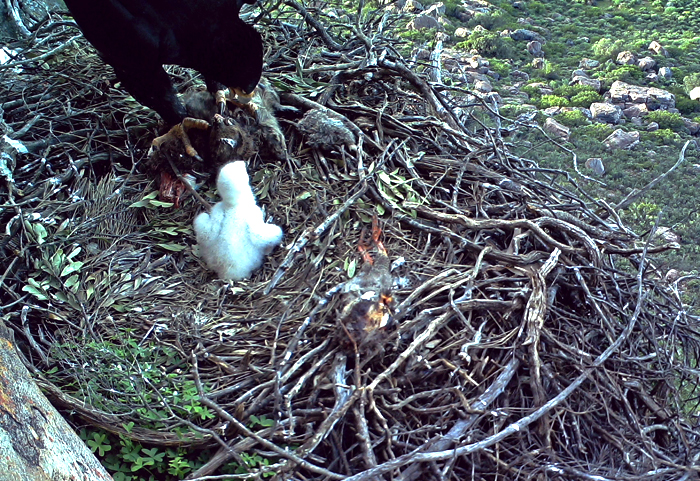 A mixed lunch variety of prey species on a nest in the Sandveld. Photo by Megan Murgatroyd.

We expected that a specialist species like the Verreaux's Eagle would be negatively affected by this agricultural development. We thought that it would breed less successfully than its neighbours in a natural and largely protected habitat.

Much to our surprise we found the opposite. Eagles in the agricultural area produced 2.7 times more young than pairs breeding in the pristine habitat.

The breeding performance in the agricultural area was actually the best ever recorded for this species. Conversely, the population in the Cederberg has one of the lowest breeding performances ever recorded for the species. We modelled the likely population trends of these two populations and our results suggested that the Cederberg would not sustain itself into the future, unless birds come in from elsewhere.

Research on the European Marsh Harrier has produced the same findings. With suitable breeding habitat and the availability of small mammal prey it thrives in intensive agricultural habitats.

Why the counter-intuitive outcomes

So it seems that this specialised species isn't negatively affected when switching away from its usual prey. But because there isn't enough information on diet from this population prior to agricultural development, we do not know whether the dietary changes are due to agricultural development, or whether this population has always had a more varied diet. 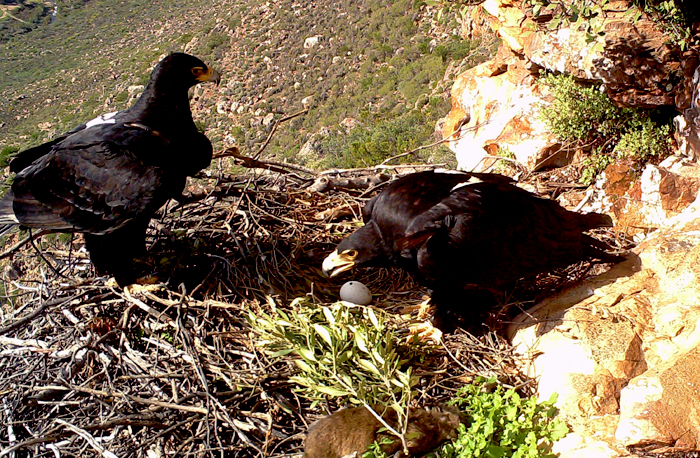 Another possibility for the greater breeding productivity in the Sandveld is a laid-back lifestyle. Different land features can drive contrasting uplift availability. In mountainous terrain, air movement over ridges creates uplift, which can be harnessed by eagles for soaring flight. In flatter terrain, like the Sandveld, eagles rely on gaining altitude by thermal soaring, which is achieved by circling in upwards moving pockets of warm air. So it might just be that energy consumed in flight is different between the two populations.

Caution is needed when exploring how general these patterns are. It is likely even for the Verreaux's eagle that there will be a threshold level above which agricultural development will start having a negative impact. Farmland consisting of a mixture of natural and non-natural habitats seems to favour this species. It's uncertain whether it would do so well if farming intensified.

The results of our study will hopefully contribute to the debate on what the best way forward should be to protect biodiversity while at the same time allowing agricultural development. There are a a number of possible options. These include land sharing, mixes of natural and farmed habitats or separate farmed and protected habitat.